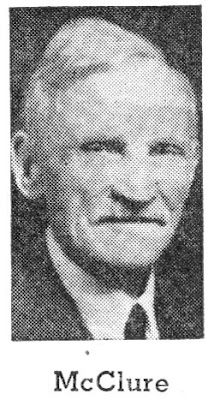 Samuel Sidney McClure, 92, who launched the first newspaper syndicate, Nov. 16, 1884, died in New York City, March 21, almost forgotten by the general public that his editorship and inventiveness had once so importantly influenced.

Since writing his "Autobiography" in 1913 he was virtually retired from McClure Syndicate and the once-powerful McClure's Magazine.

He had another fling at publishing, however, in 1916 when he and associates bought the old New York Evening Mail, in later years to be merged with the New York Telegram under the ownership of the late Frank Munsey.

Wiry, alert, bright-eyed and always in a hurry, Mr. McClure is remembered by his associates as a man who could completely absorb himself with a new idea.

"I never get ideas sitting still," he said.

Started with $5 Loan
Mr. McClure began the syndicate on $5 borrowed capital, after the idea was rejected by his employers, Century Co., for the material in St. Nicholas Magazine which he insisted newspapers would pay to reprint. Five months later he owed authors $1,500, had $1,000 coming in from newspapers.

He was joined by John S. Phillips, a friend he had worked with on the Wheelman, Boston publication of a cycle manufacturer. Mr. Phillips was a business man, and Mr. McClure was not inclined to watch money, as he admitted.

The fortunes of the syndicate were at a low ebb when Mr. McClure went over to Columbia College and offered to file clippings at $3.50 a week. Even when he had 40 newspaper clients, he gave stories free to one of them to get proof-press releases for the others.

Mr. McClure was responsible for developing many great authors. Robert Louis Stevenson, then a noted writer, was promoted to new heights, when Mr. McClure received instruction from Joseph Pulitzer of the New York World to get Stevenson for $10,000 a year to write a weekly essay.
The syndicate also printed Stevenson's "Black Arrow" under another title, first story to be illustrated. The illustrations were done by Will H. Low, friend of Stevenson. This brought in the most money of any of the McClure's syndication.

At the turn of the century the McClure Syndicate developed its own printing plant in Baltimore, Md., and was among the first to print color comic sections.

In 1892, S. S. McClure had turned the syndicate over to a brother, T. C. McClure, so that he could devote himself to his proposed magazine. McClure's. He had developed a wide acquaintance with authors and journalists in nine years of syndication, although he had less than $3,000 in the bank.

Mr. McClure, ever modest, declined to take credit for his discoveries. "What an editor does is give a writer a chance to be printed," he said. He compared himself to a farmer who does not "make the wheat. What the farmer did was give the wheat a chance to grow."

His life is in accordance with American tradition. He was born in Ireland, came here as a poor boy, worked his way through college in Indiana, married a daughter of one of the professors. To his father-in-law he gave much credit for his training. To Harriet Hurd, the girl he married, he owed much, too. She helped him through early struggles, decided in favor of postage for the syndicate rather than steaks for the family, and translated French and German stories for him. She died in 1929.

Comments:
The obit here, as most obits are, is probably a little hagiographic, but I have to admit that the McClure quote in which he compared himself to a farmer who gives the wheat a chance to grow really touched me.

Anyone one know what happened to the comic strip properties (archives and rights) that belonged to the McClure syndicate? Were they bought out? Does another syndicate own them now?

Jason, according to one of Allan's older posts, McClure was bought out by Bell/North America News. Here's the link to that:

I could be wrong, but their properties generally seem to have been eventually absorbed into King Features.