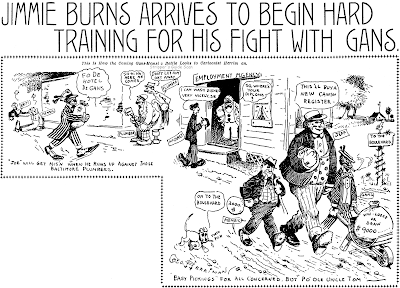 Wednesday, September 11 1907 -- Before Jimmy Britt's welts have even begun to heal Joe Gans is already training for his next fight, scheduled for September 27. This contest will be against a not particularly distinguished opponent, George Memsic. Memsic also fought as Jimmy Burns and both names are referenced in this cartoon, making for a little confusion if the reader wasn't up on the aliases (aliai?).

Many fighters of this era went by pseudonyms. Sometimes it was to get the crowds on their side (thus the common use of Irish names for fighters who had no such heritage), sometimes fighters took on variations of the names of other popular boxers. "Joe Gans", for instance, was the stage name for at least three different boxers.

Who the Baltimore plumbers are I haven't a clue.

Friday, September 13 1907 -- The Hassayampa Club, an organization of Arizona's big movers and shakers, holds a club outing to Los Angeles. The 'reunion' includes a day of various waterborne athletic conntests followed by meetings and festivities in the evenings. At the meetings one of the hot topics is whether Arizona should press for statehood.