Strange Life and Death of a Multimedia Superstar 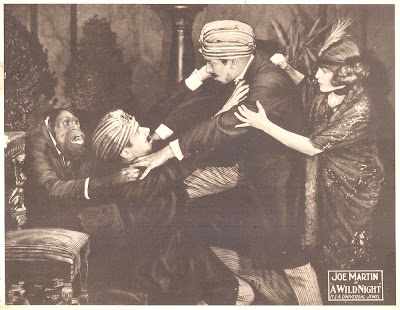 In the halcyon days of silent comedy, among the funnier stars were the animal comedians. Among others, there was Brownie the dog, Max, Moritz and Pep, the monkey trio, Snookie the chimp, Billy Whiskers the goat, Cameo the cat, even Sally the horse. One of the most famous was an Orangutan given the monicker "Joe Martin". He was heavily promoted by Universal pictures as the "smartest animal in the world", and as being the "closest an ape can be to being human". They embarked upon a series of slapstick shorts in 1919, with titles like The Jazz Monkey and A Monkey Prohibitionist. They became so popular, a sub-series with a female, "Mrs. Joe Martin" were made.

In 1920, a comic strip was inaugurated starring the simian star. Here's the announcement for it, with a brief bio of the artist, Forest A. McGinn. The newspaper it appeared in, Farm Bureau News, ran only this blurb and the first episode! 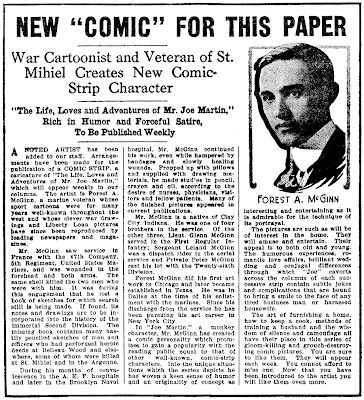 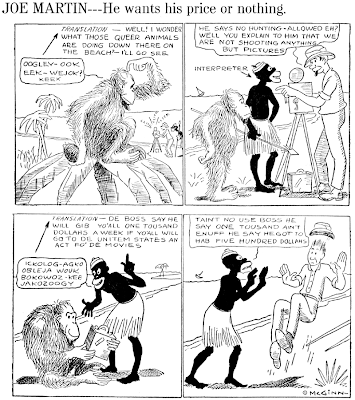 My brother Mark Johnson searched through a great deal of newspapers on microfilm before he found another that carried the Joe Martin strip. These next three are from The Vernal Express (Utah), which began running it a year later (2-25-21). Here are episodes #2 (3-4-21), #3 (3-11-21), and #4 (4-8-21), after which they abandoned it. I have no idea what syndicate this is. Both the Washington and Utah papers both regularly took Western Newspaper Union and Autocaster stuff, but this could very well be some free promo stuff sent to newspapers by Universal. [I concur with that guess -- Allan] 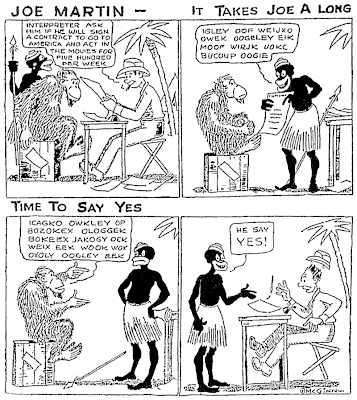 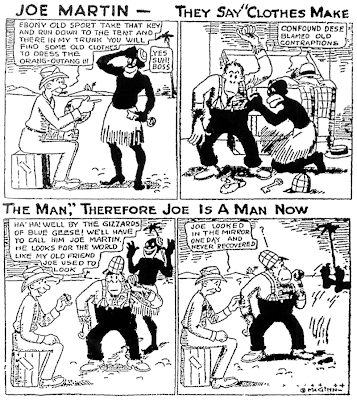 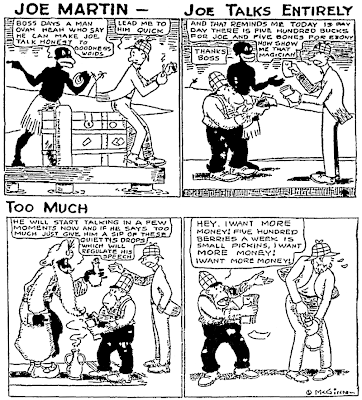 The rest of the Joe Martin story isn't very pleasant. Far from being the wonderful animal he was painted as, Joe was actually quite unpleasant to work with, going through unpredictably aggressive periods of behavior. A couple of episodes in which he got loose and went on destructive rampages even made it to the newspapers. Once, he broke into a house and destroyed it, in an hours-long bender in which the police had to intervene. Fellow Universal comedy star Diana Serra Carey in her memoir, Whatever Happened To Baby Peggy? tells of the horrible end of Joe Martin. The ape had gone berserk again, and had taken a vicious bite on the arm of trainer A.D. Steckler's wife. In a blind rage, he brained Joe, tied the unconscious ape to a prop dentist's chair set up for a comedy to be filmed, and pulled out every tooth of his head. Someone at the studio did the most humane thing, and put a bullet in the monkey's head to end its suffering. A January 1924 news article tells of how Joe Martin was getting too hard to control, and was sold to the Al G. Barnes circus. The last Joe Martin comedies were released that month. Here's a clipping from the 10-24-26 Arizona Daily Star (Tucson.) It's another monkey, using the franchised Joe Martin name. Today there doesn't seem to be any Joe Martin comedies that have survived. However, he can still be seen briefly in Seven Years Bad Luck (RC 21) , a Max Linder feature. 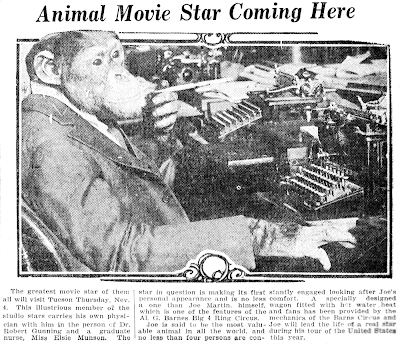 Comments:
Wow, the story of Joe Martin really is horrendous and inhumane. I would say that the abuse didn't begin or end in the dentist's chair, and that if Joe was hard to deal with, he may very well have had a darn good reason for it.

It's my understanding that mistreated or not, apes in such situations get completely unmanageable once they reach maturity. The frustrations, social and sexual, of not having interaction with other apes makes them a real handful.

Is it possible that the Joe Martin strip didn't go anywhere because it wasn't licensed, and the studio put McGinn out of business?

Didn't anyone notice that when "Joe" visited Arizona, he was no longer an Orangutan, and now a Chimpanzee? What could be the reason offered? Movie special effects?

Anon --
As Cole Johnson said in the text, by that time it was a replacement ape.

Joakim Gunnarsson has discovered this strip was reprinted in a old Swedish movie magazine. Amazing!