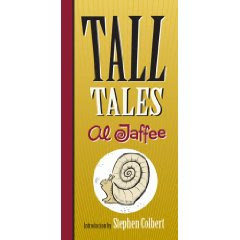 Al Jaffee is well-known to Mad magazine fans, but not so many know about his stint as a syndicated cartoonist. Al Jaffee's Tall Tales ran from 1958 to 1966 (not 1963 as the book states but perhaps the last three years were reprints?), first for the New York Herald-Tribune, then for Publishers Syndicate. The main selling point of the feature was its shape -- it was a tall one-column cartoon that could fit in a space not handled by other features. The back cover claims that this was the first and last feature ever to use the format -- sorry, no. Duets by Jo Fischer comes to mind, as does Dave Eastman's Carmichael, and many strips could be run vertically in approximately the same space (Peanuts was quite popular in that configuration).

Anyhow, factual errors notwithstanding, how's the book? Well, it serves as convincing proof that bad editing can ruin just about any book, even one filled with delightfully demented cartoons. After a chuckle-worthy introduction by Stephen Colbert, we get an informative essay about the strip from Jaffee himself. Then on to the cartoons. As I paged through (rather quickly since it was a pantomime feature), marveling at the inventiveness of Jaffee, I soon started noticing something odd. Jaffee seemed to be forever repeating himself, offering a pair of gags on the same subject, sometimes practically the same gag. Wait a second, that can't be. No, as I slowly figured out, the editor of this book was grouping similar cartoons together. If he had two gags about flamingos, they went on facing pages. Two gags about traffic on a narrow road -- put 'em on facing pages. Two gags about the starting gun for a foot race -- well, you get the idea.

Does this editor have some sort of vendetta against Jaffee? Was he determined to ruin the book for readers and make Jaffee look like a repetitive hack? Obviously these cartoons didn't run in this order back in the day. For all we know (the cartoons are undated) they could have run years apart! What could possibly possess this editor to think this was a good idea? Is he a compulsive sorter, did he really think that he was making some positive contribution?

Because of this bizarre sorting fetish I could get little enjoyment out of the book. I couldn't enjoy the gags -- all I could concentrate on was what new indignity this editor could do to Jaffee at the next turn of the page. I actually found myself disappointed when the gags on facing pages DIDN'T match. Hey, editor, yer fallin' down on the job! 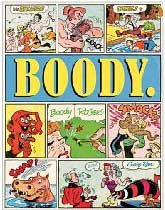 Knowing well how much Craig Yoe loves the work of Boody Rogers, I had to get this book despite knowing that the bulk of it would be comic book stories. Naturally I would have preferred Boody's newspaper strip work, but according to the marketing for the book, I could enjoy myself with the extras. According to the description, "this beautifully designed tome also has tons of vintage photos and unpublished art (including art from the first modern newsstand comic book that Rogers did in 1935). It all begins with a career spanning fun and fascinating interview with the late Rogers, by editor Craig Yoe."

Let's see how that marketing-speak translates into actuality:

"tons of vintage photos" = one dark, blurry photo of Boody

Okay, so I've obviously been bookjacked here. So what extras do we actually get? Instead of the promised interview, we instead get a three page introduction by Yoe. It's fine, but certainly no definitive brain dump on the life and career of Boody Rogers.

If you want to read some of Boody's looney comic book stories I don't doubt that you'll enjoy the book. But if you're there for the promised extras, prepare to be underwhelmed.

Comments:
Great snarky reviews! What we do need is a reprint of Jaffees Sunday pages of Tall Tales complete with their horizontal top gag. I have a few new ones in color which I'll be showing when I get them scanned. I may reprint your review of the book there. Funny enough Fantagraphics (who also wrongly advertised the Betsy and Me collection as 'complete') would be the most suited publisher for such a book.

Oh and what I have seen of the later Tall Tales are no reprints! Jaffee even complains he was forced to use text in the later ones, which cot him his foreign accounts.

Hi Ger -
I seem to recall reading somewhere (not in thew reviewed book) that Jaffee was unhappy about doing the Sunday and thought it didn't really work.