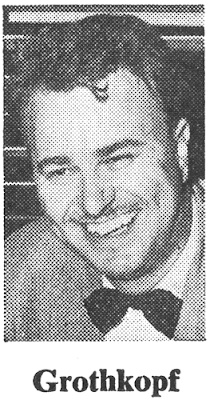 Chad of the eggbeater-beaten hair, of the large white teeth, of the Don Ameche face, was talking.

"I like people," he said, "in fact, some of my best friends are human beings. But I've been doing animals so long I can think only of fawns, rabbits, bees, squirrels and bear cubs."

Chad, last name of Grothkopf, a St. Bernardish sort of guy himself, is the free-lance artist who has brought the animal kingdom into PM's "Clear, Clean Taste" advertising campaign that has been appearing since last September in some 400 newspapers around the country.

15 Ads
The ads are prepared by Lloyd, Chester & Dillingham, New York advertising agency, and the idea is to convince people of PM's clear, clean taste through the association of an animal with that theme. Ten ads have appeared and five are coming up.

This will give you a clearer, cleaner picture of what PM is trying to do. There's Bill Honeybee, for instance. The copy that goes with him in the ad says:

"No one has ever been able to put into words the taste of prime roast beef or cantaloupe or a drink of fine whiskey . . . but this picture of Bill Honeybee at his morning nectar comes mighty close to explaining PM's 'clear, clean taste.'"

Young Bill is an animated, humanlike cutie, buzzing from every pore.

Likes Animals
Another ad has Br'er Rabbit drooling over a carrot. It's mouthwatering copy, and it's been successful, according to Chad. It's been doubly successful for the 35-year-old artist, matter of fact: as a result of his PM work, he said he has been asked to do a cigaret account and to illustrate several children's books.

Chad grinned. His features are every instrument in the band, all tuning up at once, with a little rumba thrown in on the side. 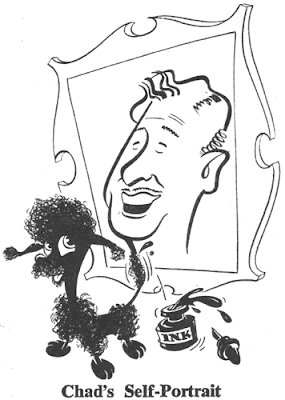 "How did I get started with animals?" the grin asked. "Well, I like them, that's why. It's easier. They don't care what a man's got, money and things, I mean.

"I suppose this sounds sentimental, but I'll take dogs off the road and give them a home. Dogs, rabbits, chipmunks, a raccoon— I've taken them all in at one time or another.

"It just seems that everything I start turns out to be an animal."

Answer in Animals
Creative people find their ideas hanging from a bough of a tree they happen to be looking at, on a few spare feet of a cloud, in the whisper of the wind. Or in the speed of a hummingbird's wings.
It was no different with the agency executive who for quite a while had been trying in vain to describe the indescribable, taste. He knew that almost 98% of men buy their favorite relaxer because of its taste. Unfortunately, no one can tell what taste is, except by comparison.
At any rate, he and others wanted to put across the PM c-c-t slogan. One day he walked through Central Park Zoo in New York. He watched the animals. In them he found the answer. Animals, birds and insects, he thought, can't use words, but they know what they like.
Brought from Coast
That settled, it was easier to find the man. The agency already knew about Chad and his animal drawings. He was called in from the West Coast, borrowed a friend's studio, spent months on the final illustrations, now is not sure when he'll be able to return to Santa Monica, where he wants to continue as a free-lance.

Chad said he believes animal pictures have an appeal today, especially in the East, where so few people can tell a praying mantis from a butterfly.

"When I grew up in Ironton, Ohio," he said, "animals were the most natural thing in the world for me to draw because they were all around me."

With his new schedule, Chad has turned into a night owl. He himself doesn't get to see many animals outside of those in the zoo and the ones he hires from a model service.

"I can't," he explained, "because I prefer to work all night. I work with a radio going—got to have that radio on—then I sleep all day."

[Allan here -- bet you're wondering what the heck PM is -- watch this promo video, directed by Chad to learn the bizarre answer! Oh, and the reason this is on the blog is that Chad was a cartoonist on several strips -- Famous Fiction, True Comics and Howdy Doody.]

Comments:
Is this misguided ad campaign supposed to appeal to childish adults or whisky-loving tots?

Judging from the salesman's comments at the end about the print ads, it appears that this cartoon was directed toward PM's own sales force -- or at least the ones with IQs well below average. I can't imagine showing this cartoon to a group of liquor salesmen in the 1950s and getting a favorable reaction from them.

Maybe children under age 5 would appreciate the repetitious dialogue, the half-hearted rhyming, and the cute animals, but I don't think most people 6 and over would get too much enjoyment out of this cartoon.

Contributing his voice talent was not one of Art Carney's proudest moments.