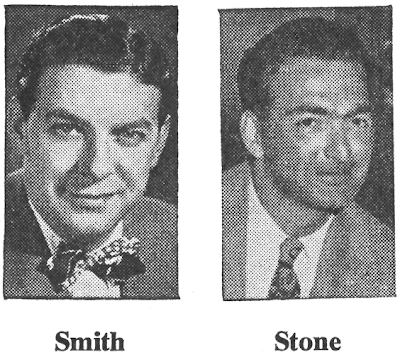 TV's "Howdy Doody" has had about everything a little cowboy puppet could want. Friends (an estimated audience of 5,000,000
small and large fry see him five days a week); memorabilia; music; and regular trips to the Ringling Bros. Barnum & Bailey circus.

But this week United Feature Syndicate announced plans to win him more friends. A "Howdy Doody" Sunday page will be ready for newspapers in early fall.
Just to get the record straight on the "Howdy Doody" phenomenon, flourishing since 1947, we went to see Martin Stone of Martin Stone Associates. Mr. Stone, whose penthouse offices on 58th St. overlook Central Park, is co-owner with Bob Smith of the "Howdy Doody" TV show. He's co-producer (with Roger Muir of NBC) of the show and controls the licensing rights.

"I think this is significant because it's the first time a character originated on television has gone into the comic strip field," said Mr. Stone looking toward the end of his office decorated with embattled books. Another show of Mr. Stone's is "Author Meets the Critics." 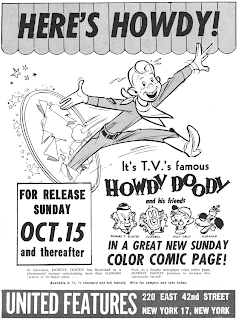 The radio - video producer hastened to point out that he hadn't forgotten "Hopalong Cassidy," that other TV star. However, Hoppie was known in books, movies and radio long before he hit the home flickers. On the other hand, "HD," he said, is indubitably a TV baby.

"I'm not sure it won't be the beginning of a trend," commented Mr. Stone of TV-comic strip get-togethers. "The impact of TV on children, especially, but adults too, is fantastic.'

Mr. Stone said he'd been approached about a possible newspaper strip from time to time but he'd held off until he could develop one in his own office. The Sunday page, result of over a year's work, will carry the byline of "Chad" but will be the joint work of Chad Grothkopf, artist, and Milt Neil, writer. Both are members of Martin Stone Associates staff.

As an added fillip, the Stone office expects to do a bang-up promotion job in newspaper towns. "Howdy Doody," puppet friends and Actor Bob Smith will be on hand for personal appearances at launchings of the strip.

Comments:
Would love to see what the finished results look like!