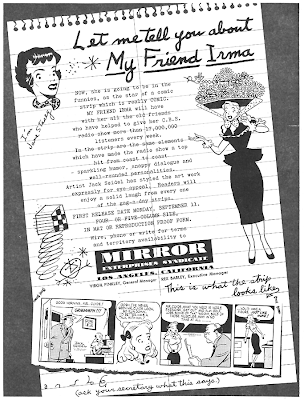 Flushed with success over Hopalong Cassidy's newspaper fling following TV and radio build-up, Los Angeles Mirror Enterprises Syndicate will do more of the same. This time it's "My Friend Irma" (Marie Wilson on CBS and in movies) who will be the subject of a comic strip.

The gag-a-day, without continuity, and due Sept. 11, is drawn by 33-year-old Jack Seidel, who sold his first cartoon at 18 and has been coached by Merrill ("Freckles and His Friends") Blosser, Ed ("Mark Trail") Dodd, Jimmy ("They'll Do It Every Time") Hatlo and others.

The contract was with Columbia Broadcasting, which owns character rights. Cy Howard created and directs the radio program.

Comments:
I recall this strip, it ran in the old ST.LOUIS STAR-TIMES. It was just part of a MY FRIEND IRMA machine. The radio series also led to Comic Books, a couple of movies, one being the Martiin & Lewis debut, and the first series aired live from CBS's then- new "Television City" studios in Los Angeles.

Despite the avowed influences, to my eye the artwork is an obvious and awkward knock-off of Al Capp's style (with "Priscilla's" weird hand poses thrown in).