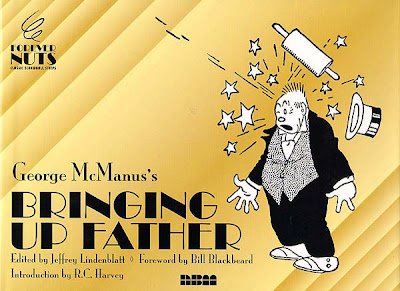 First things first: as you can see in the credits above, I'm not a completely impartial reviewer when it comes to this book.

Bringing Up Father is probably my favorite comic strip of all time, so when NBM decided to reprint the first two years of the strip I was delighted to be a part of it. There was, as most of you know, a prior reprint effort of some of this material. In the 1970s, as part of their Classic American Comic Strips series, Hyperion did a Bringing Up Father book that covered some of this same ground. But there were three problems with it; the reproduction in the book was just awful (the material was printed just as it came off the old dilapidated tearsheets, warts and all), the strips were printed so small that McManus' chicken-scratchy sloppy lettering was sometimes illegible, and quite a few strips were missing and others misplaced in the strip's continuity.

The first problem was solved in this book with the application of over 300 hours of restoration work by yours truly. Some reviewers have commented that some amazing pristine source must have been found to get the strips looking so great. That's a comment I cherish because it speaks well of my work, but the assumption is incorrect. All but about a half-dozen of the strips reprinted are from browned, flaky, often badly-printed and misprinted newspaper tearsheets. The remaining few were -- ugh -- from microfilm, a REALLY big challenge of restoration.

The size problem was improved by printing the strips about 15% larger than in the Hyperion book. While I would have liked larger, it's amazing what an improvement this small increase has made. The strips are all quite legible now (in part because I restored the lettering as well as the art).

The problem of missing and out of sequence strips was solved by using Bringing Up Father's home paper, the New York American, as our benchmark. Hyperion worked off of Bill Blackbeard's collection, which was a mix-up of San Francisco and other papers. That led to pretty major omissions and continuity mix-ups. The strips in the new book are all in sequence, not a single one missing, and each is dated based on its original appearance in its home paper.

Besides doing the restorations, NBM allowed me to do something that I think should be a standard feature in all classic strip reprint books. I wrote annotations for many of the strip episodes explaining the references which are likely to be opaque to today's readers. And it's not dry history lessons -- I talk about such things as pop songs of the day, the curious origin of collapsible tophats, the allure of French postcards, and so on. The idea is to bring these strips and their very dated cultural references back to life for the modern reader, and if the reviews I've read are any indication it has worked quite well.

By the way, I wrote so many annotations that NBM couldn't fit them all into the book! You'll find a link to an expanded version of the annotations on NBM's website. The good news is that my annotations were cut back so that the book had room to print the BUF strips all the way to the end of 1914 (Hyperion's stops in July 1914) so you get in total over 100 strips never before reprinted.

Of course the real question is whether the strip is entertaining. While we all enjoy McManus' work in the 'classic' period of the 1930s and 40s, his work in 1913-14 is rougher around the edges. His amazing clean lines are already there, though, and his humor is fully developed (after all, he was already a veteran stripper at this point). What I find particularly interesting is the contrast between the 1913-14 Jiggs personality and its later counterpart. The 1940s Jiggs, despite his protests to the contrary, is a subdued, domesticated homebody. The early Jiggs is a rough-and-tumble troglodyte, a gambler, a womanizer, a fighter, either drunk or trying his best to get to that state. In short, he's a more entertaining character in his raw state than once Maggie had a score or so years to wear him down. By the 1940s Jiggs had grown into a bit of a sarcastic old sourpuss, while in 1913 he is unadulterated, full of life and revelling in his own crudity. I re-read the BUF strips of 1939-40 shortly after working on this book. I can honestly say that if it were not for the transcendent art of the later strip I'd choose the material of the 1910s over the later stuff hands-down.

You can order your copy at NBM's website or at Amazon.

Comments:
Apologies for not knowing about your restoration efforts before this, Allan. Mind if I ask what techniques you use in working on material like this? Scanner/Photoshop or working on cleaned-up prints of the strips with pen & ink?

Hi Hugo --
I'm a Photoshop man. No copiers, light boards and magnifying glasses for me.

Speaking of which, does anyone know of a source for a really good set of clean zipatone TIFs? When working on strips with zip it's great to have a full complement of the popular patterns at hand for doing replacements. I've made some
myself, but only of the most basic patterns.

Thanks Allan. Ben Day style tones really seem to be an interest in Japanese manga these days more than anywhere else. If you can get past the pictures of weird people with giant eyes and spikey hair, you might find something you can use on this resource page:
http://www.mangatutorials.com/tut/digitones.php

Hi Hugo --
Well, that was an experience. Most of the links were bad, others in Japanese, other offering only screen resolution material. Finally found LetraSet, though, which had actual physical tone sheets -- who'd have thunk they still existed -- cool! I can scan them in at 1200 dpi and have a full complement of tone levels! Picked out a liberal selection (you can't really tell what the heck you're buying since the pictures are useless) only to find that their website is so flaky you can't successfully place an order. Sigh.

Well, it's not a big deal. After doing the restoration work for two books I find my vision has been really hurt by the experience. Now I'm wearing reading glasses for all reading, not just low light conditions as previously. Thinking I may not want to do any more of these huge projects.

Well, I hoped something in all of that would work out for you, and regret that it didn't ... I know that packages of the manga tones are also available from comic book supply houses too - but I'm sure you would probably be much happier with the LetraSet tones. I seem to remember spending hours with an exacto knife cutting and setting that stuff ...

I'm currently scanning and restoring parts of my collection of old dailies. It would be interesting to get a step-by-step of how you scan/restore to get so good results.
The way I scan is described in this post: http://sekvenskonst.blogspot.com/2009/08/paul-fung-and-scanning.html
If you have a less time consuming way to do it I'd be happy to learn about it. :)

Hi Joakim --
Sorry, there just aren't many shortcuts. I do have a few very minor tricks I've learned over the years but in broad outline we work the same way. If you want that Fung material to REALLY pop, though, you may want to try redoing the zipatone. What a difference that makes -- but it's also very time-consuming.

Looking at the sample above, I'm hoping you left the titles on the earliest strips, since these changed from day to day for many months into the feature. Though it suddenly occurs to me that you may have left out the ones that weren't technically 'Bringing up Father'.

Hi Eddie --
I was prepared to lobby for putting titles on the strips until I realized that we would have to print the strips smaller because of that. I for one was willing to forgo that in the cause of printing the strips as large as possible (given the limitations of book size which were not negotiable). I would have been happy to put the titles in my annotations, but of my tearsheets and the ones we got from other sources, VERY few had the titles. I didn't look at the NY American myself so I can't say for sure, but I think BUF seldom had the 'subtitles' we associate with this early material.

...and we printed *ALL* the strips that were in the BUF series, titled or not.

Wonderful work, and that includes the annotations. They become more necessary with every passing year. The Li'l Abner Sunday reprints a few years back had some nice annotations. This kind of attention provides the reader a rich experience in revealing contours of the strip enjoyed by its readers when first produced that would have otherwise been lost. Well done.

Got my copy of BUF today.... fantastic... I admit, I loved the strip for the GM art, he was amazing, but these early strips (a lot like seeing the first Dennis the Menace cartoons)are so raw and the language is like reading modern day Chaucer, but funnier.
Hopefully there will be reprints of the 40's art someday. I used to go to my collge library just to look at the scans. Love this stuff!