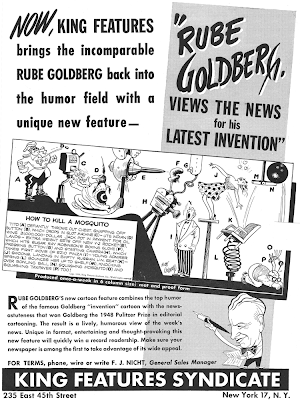 One day nearly half a century ago, mining engineering students at the University of California
had the privilege of viewing the operation of a barodik—a complicated machine for weighing the earth. And looking on glumly was Student Reuben Lucius Goldberg of San Francisco, who didn't take as he should to test tubes, density of air, chemical combustion. He was in private revolt against the marvelous apparatus. "I kept thinking, "hell, I don't care how much the earth weighs,'" he recalls.

But some years later, Rube Goldberg was cashing in on hypothetical barodiks and his own personal observation that most people seem to do things the hard way. As syndicated cartoonist with the New York Evening Mail and later the Journal, he drew machines that would perform in amazingly complicated ways such simple feats as cleaning a straw hat or pulling a cork out of a bottle. The mythical inventor was Professor Lucifer Gorganzola Butts.

Joined 'Sun'
His machine production, despite the popularity, came to a virtual standstill—except in ads—about 15 years ago and Mr. Goldberg had meanwhile moved into other fields: he was comic strip cartoonist of the highly popular "Boob McNutt" before 1934 when he quit cartooning for magazine writing. In 1938 he became editorial cartoonist—the more serious part of the trade—for the New York Sun and won a Pulitzer Prize in 1948.

But the name "Rube Goldberg" has remained synonymous with funny looking gadgets. And on July 15, the cartoon burlesquer of the machine age was back. Hearst Newspapers in New York, Chicago .and Los Angeles began a new weekly feature: "Rube Goldberg Views the News for His Latest Invention." Readers saw a revolving disc with a mechanical arm able to set off a rocket which hit a dice box. And a pulley arrangement managed to fix it so a poor old taxpayer lost his shirt.

It was Rube Goldberg, all right, with a wild type of humor based on incongruity (and, he insists, cold logic). But it wasn't a mere revival of an old favorite. Professor L. G. Butts was out, and peopling the six-column cartoon instead were leaders in the news. (From piano-playing Truman to Joe DiMaggio). The feature, through Goldberg ropes and levers and pulleys, tied the news together in a way to make readers' eyes pop.

The new weekly feature resulted from, among other things, the sale of the New York Sun to the New York World Telegram early this year. At that time Mr. Goldberg accepted a three-a-week political cartooning post with the New York Journal-American and King Features (down from his five-a-week for the Sun and BELL). It was agreed then that he'd get up a feature too. Its format was later suggested by William R. Hearst, Jr., Journal-American publisher, when Mr. Goldberg objected to a straight revival of his old-timer. The new element of basing it on current news topics and non-partisan politics puts it in the class of something created— not a mere repeater, the cartoonist points out.

That tenet of the 67-year-old cartoonist seems to go all the way back to his childhood. A brother was the accepted comedian in the family circle but "while they were laughing at so-called funny jokes and songs, I was finding a face I thought was funny in its own right. I wanted to create something original instead of just retelling. . . ."

Later, a one-man rebellion against the commonplace brought cheers from newspaper readers. Working late once at the Mail to fill his entire allotted page ("You don't have the stage now you had then," he says) he encountered an associate who asked, "You still here?" Rube replied without hesitation: "No, I'm up in a balloon shoeing a horse."

He converted the incident into a panel, titled "Foolish Question" to help fill up the lower half of the page (his sports cartoon took up half the page). "The public happened to be ready for that," says Mr. Goldberg, who firmly believes "You must come along at a time when the trend is in your direction." (Another of the "Foolish Question" series: "Did you hurt yourself?" put to a man who had just fallen out of the Flatiron Bldg.).

Mr. Goldberg has kindly crinkles around his eyes; two sons who use a different last name so they won't be trading on their father's fame; and great enthusiasm for the new feature. While humor within bounds is possible for editorial cartooning, he'll have range for a broader type in the "inventions."

And on a second level, some may find his zany correlation of the news representative of the state of the union. "People are sort of balled up in their minds," observes Mr. Goldberg. "We don't know what it's all about but we know we're in it up to our necks." Another trend may be in Mr. Goldberg's direction.

Comments:
To this very day Rube Goldberg remains synonymous with funny-looking gadgets, even among people don't know that there ever was a cartoonist by that name.

Goldberg was one of the funniest comic strip artists ever. I just love the guy. The funniest stuff was in his early period, before he started doing the inventions. In my opinion he was wasted as an editorial cartoonist.