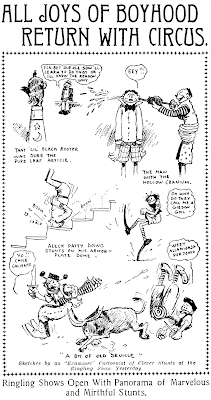 Tuesday, September 24 1907 -- Attendance at the Ringling circus was 16,000 and a fine time was had by all. Among the odder acts not pictured above was a horse that kicked a football. Didn't know a horse's legs moved in that fashion, but then I guess that's what made it noteworthy. 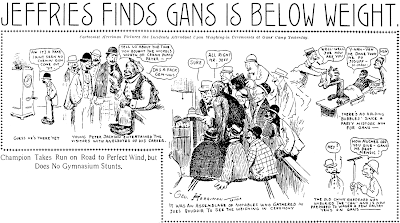 Wednesday, September 25 1907 -- Gans is just days away from his match with Memsic, and Jim Jeffries' entourage pays a visit to watch an early weigh-in.

Some explanation of Herriman's vignettes above; at the far left the fellow trying to get gum out of a machine is having trouble because this was one of a whole roomful of gambling machines that had been set up at the training camp. Designed to extract some silver from visitors, the machines helped pay the boxer's expenses.

Next to that we have Young Peter Jackson, a boxer of no special note if the Boxrec website tells the whole story. The original Peter Jackson, on the other hand, is considered one of the early greats. As we've probably mentioned before in these posts, boxers in that day often took on the names of former greats as a marketing gimmick.

The reference to Bubbles on the upper right I can't explain further; undoubtedly the incident was explained in the accompanying article, but my photocopy only saved a small portion of it.

Comments:
Hello, Allan---I believe that back then, early slot machines got around the law by dispensing candy or gum, the reasoning being if you always got something for your money, it warn't gambling. Of course nobody cared about the terrible gum any more than we did when buying Topps baseball cards as kids. ---Cole J.