You guys are doing great on verifying these 'newish' strips! Here's what we have left to find, along with some more titles I added. Still the same rules -- I need your verification that these are appearing or have appeared in real U.S. newspapers -- online doesn't count, news stories don't count. Please tell me the newspaper where you found them, and if you can provide a scan or pic that would be double great.

Comments:
Rip Haywire was running in the Denver Post when the Rocky Mountain News folded in February.

I've got some "Ollie and Quentin" Sundays from Minneapolis Star-Tribune, printed in summer 2008.

Thanks Hankster and Charles!

Hi - I was just thinking with all the strips I see getting dropped in papers are there any that are now only running online that had appeared in actual newspapers in the past.

Mandrake The Magician perhaps? I'm on a fan message board where no one reads it in newsprint.

Tom: I don't know if these are the kinds of examples you're looking for, but "Clear Blue Water" by Karen Montague-Reyes left print syndication last year to become a webcomic instead.

Also, "Diesel Sweeties" by R. Stevens started as a webcomic, went into print syndication, and then reverted to being a webcomic only.

"Pibgorn" is an unusual case. It started as NEA's Christmas strip as "A Fairy Merry Christmas." After that run Brooke McEldowney continued it as a webcomic. It was intially available on United Media's Comics.com site (UFS is the syndicator for McEldowney's "9 Chickweed Lane") and then switched to Universal Press Syndicate's gocomics.com.

Speaking of the NEA Christmas strips...
did last year's The Search for Santa
(reprinting an edited edition of 1999's A Puddles Christmas) appear in any newspaper?

Hi DD -
Wouldn't surprise me if one of those faithful Alaskan papers did, but no, I haven't seen one. Since it's a reprint it's sort of a moot point Stripper's Guide-wise.

Don't know if Dave Strickler's Los Angeles Times index is good enough for your Guide, but he lists Cafe con Leche running (test run?) for a month in the Spring of 2008.
http://www.comicsaccess.com/lacomics.php

Castronomy is (was?) by Eric Orner, the gay cartoonist/creator of The Unfabulous Life of Ethan Green.
Castronomy was part of a contest held by the San Francisco Chronicle in July 2008 to see which comics would be added to the paper.
As far as I know only the sample panels were run and the panel never earned a regular spot in the paper.
But that was around the time the paper raised its price to a dollar and I stopped buying it regularly,
defaulting down to only my local paper on a regular basis.

Hi DD -
You bring up an important question, one I've been wrestling with for quite some time -- do test runs count?

Over the past few decades test runs have become quite popular with newspapers. In their faltering attempts to make readers happy with the comics page, they are abdicating their editorial position and telling readers to pick the new strips.

If strip X appears in test-runs of a few papers, or hundreds for that matter, but is otherwise never picked up (that we know of), does it belong in Stripper's Guide?

My thinking generally has been that if some papers gave them test runs, then SURELY someone must have REALLY picked them up. But sometimes I really wonder. A few strips that I've seen under these circumstances came and went so fast from syndication that you really have to wonder if there were any actual takers. Not to mention any names, but some were so awful IMHO that I found it hard to believe that any paper (or their readership) would have picked them. On the other hand, there are some new strips that we KNOW are running that I just cannot believe anyone in their right mind picked up.

So I'm conflicted. I'd be very happy to hear your reasoned opinions on the subject folks.

Regarding Cafe con Leche and Castronomy, I'm tempted to give the nod to the former but not the latter. I do know of a Canadian paper running Cafe, so combined with a test run in LA I'm starting to get that ol' feeling that surely someone somewhere (in the US) is running it regularly. Castronomy, on the other hand, based on Google searches is practically a phantom feature. Maybe it was done purely for that test run in the Chronicle. If so then I think it really doesn't qualify. Think I'll try to contact Orner and see what he has to say on the matter.

Here's a list of comic strips, all presumably still in syndication, that I have not seen running in any paper. As you know, Stripper's Guide rules say I have to see them running in order to list them in the guide. At this late date, so close to deadline, I'm hoping you folks can help me out. If you've seen these running in a U.S. mainstream paper (paper name please) please let me know. If you can provide a photo or scan of the feature in the paper that would do wonders for my comfort level.

Remember that online sightings don't count, and neither do announcements that a strip is running in a paper. You have to have seen the actual strips with your own peepers. You will be credited with the sighting in the published guide:

Comments:
Hi Allan. I work at the Telegram & Gazette. UNDERTOWN ran in the Sunday Telegram for about two years until this spring, when it was replaced by FRAZZ. Thanks for an excellent blog, one I follow every day!

Here’s what he told the Times-Union in an e-mail:

Maintaining is my comic strip and my intention was to make it as honest and genuine as possible. I’m proud of the work I’ve done with the strip and I’m tremendously grateful to you and your newspaper. You allowed me to share my work with your readers.

Unfortunately, Maintaining was never much of a financial success and recent market conditions have only exacerbated the situation. Universal Press Syndicate has chosen to opt out of its contract with my strip and I’ve decided to discontinue the production of the strip in order to concentrate on other projects.

Thanks Brian for verifying Undertown. Don't happen to know if Tokyopop is continuing their series after that, do you? Those guys are so hard to track -- their website is such an incredible mess.

Hi Tom --
But have you actually seen it running in a paper?

Secret Asian Man is in the San Jose Mercury News, both daily and Sunday. I'll send a scan as soon as I get the paper out of the recycle pile.

I have newspaper tearsheets of the following:

Maintaining - ran in Knoxville News-Sentinel until about a year ago.

Daddy's Home - I have several Sundays from Atlanta J-C. Also have daily samples from when Washington Post test-runned it during Doonesbury's months-long hiatus.

Home and Away - Have Sunday samples from LA Times.

Thanks Charles and Laurie --
That takes care of a nice chunk of these hard-to-find features. Gracias!!

I'm in Italy, so I can't help you, but in this interview

Dan Thompson says, if I'm not wrong, that RIP HAYWYRE is in the Denver Post and in The Oregonian.
Maybe somebody could control...

Hi Fortunato --
The problem with just taking quotes like "it runs in the Podunk Herald" at face value is that there are still papers that buy features and then don't run them (or these days, run them only on the website). When a creator says their feature runs in a paper I'm afraid I have to be skeptical and stick to my guns about the old 'eyeballing' rule.

"In the Sticks", was supposed to debut, it was rumored, on August 10, 2009. As far as I can determine it still hasn't begun syndication yet.

A very recent copy (July 30, 2009) of The Cleveland Plain Dealer was running "Free Range" on their comics pages.

Hi folks --
I'm back from our vacation in the enchanted land of Costa Rica. R&R meter not quite pegged on full since I worked a lot on the book while I was there.

I see the Italian squad was pretty dominating at the Super-Quiz; congratulations guys! Did the scarcity of answers indicate that the quiz was too hard? I was afraid that most of the answers were just a Google away, so I guess I'm relieved in that regard.

I was relieved to see that there were only a few questions that generated any controversy. Regarding Echo's relationship with Tumbleweeds, I'd point out that I phrased the question to indicate that either the staff or distaff might be the pursuer. And as to whether McNaught is funny or not, all I can say is that the principles thought it was pretty cute.

To get back in the swing of things here's a little something from my archives to lend a little color to the post. An episode of Super Duper about going away for vacation that I meant to run when we were leaving. Oh well... 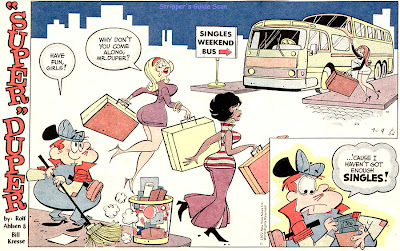 Now onto the Help Wanted portion of the program. With a deadline staring me in the face, I rather desperately need your help on some issues. In the next few days I'm going to be going back through all the new strip announcements from The Daily Cartoonist to see which I haven't been able to find in papers. As you know, Stripper's Guide rules dictate that I have to see the feature running in newsprint before it gets added to the listings. If you can absolutely guarantee me that you've seen these features in print I'm going to add them to the listings; I'd prefer if you could scan a sample or two from newsprint but at this late date beggars can't be choosers, so I'm trusting you guys. You will be credited in the guide listing, so be prepared to suffer brickbats if you're blowing smoke.

Okay, here's a few to get us started; more on the way:

Comments:
"Daddy's Home" by Rubino & Markstein runs in the Chicago Sun-Times. I'll try and get a sample scanned for you.

Not wanting to add to anyone's work on the subject, or Allan's of course, but has anyone ever given though to check daily college and university newspapers?

A co-worker of mine showed me a copy of Michigan State's daily newspaper from when she graduated ten years ago and sure enough there was syndicate comic strips in it. Many I knew some I didn't, maybe a student strip or two too.

Perhaps some "missing strips" are showing up there?

Hi Ray -
I'm in the clear on that account. One of the types of newspapers excluded in SG's scope rules are college papers.

Thanks for the info Joshua!

so someone could check one of those papers....
.