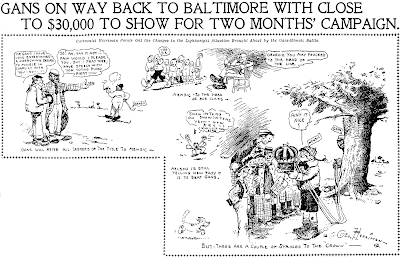 Tuesday, October 1 1907 -- Joe Gans, lightweight champion, has decided to retire and hand off his crown to the last man he fought, George Memsic. As alluded to in Herriman's cartoon, the title came with strings attached -- Memsic had to promise to take on all comers, including black fighters. Gans' retirement would ultimately turn into a mere leave of absence. Even at the time it was recognized as an attempt to stir up interest and bigger purses rather than any real desire to put the gloves away for good. 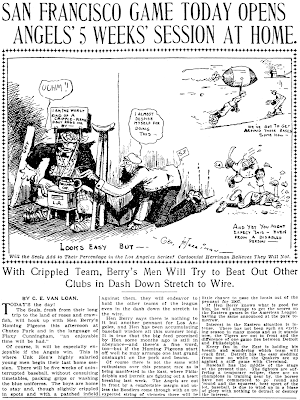 Wednesday, October 2 1907 -- Usually my LA Examiner photocopies cut off much of the articles associated with Herriman's cartoons, but here's a rare case where the whole article was preserved, so enjoy C.E. Van Loan's article describing the Angels' prospects for the final weeks of the baseball season. And yes, this florid prose is pretty representative of how most newspaper sportswriters of the day plied their trade.