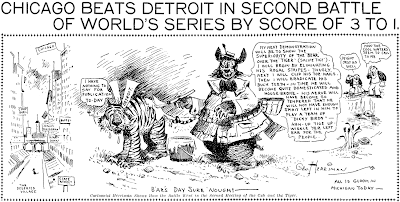 Thursday, October 10 1907 -- With the lone exception above, Herriman was frozen out of doing cartoons about the World Series. The Examiner used Tad's sports cartoons from New York to cover the event.

Herriman's cartoon memorializes the second game of the series. The first game ended in a tie (the first World Series game to end thus, and one of only two ever), but in the second game Chicago's reckless running game and superb pitching had the Tigers stymied. During the rest of the Series the Tigers never scored more than one run per game, while Chicago scored almost at will. Even the Tigers' young batting champion, Ty Cobb, could only eke out an anemic .200 average in the series and had not a single RBI or stolen base. In fact the only standout for the Tigers was a fellow named Claude Rossman who batted .400 and accounted for two out of a total of just six RBIs for the Tigers. Rossman, however, only played four full seasons in the majors.

Comments:
I notice a sign that says "chop suey" in the street scene at the left. I know that's an American rather than a Chinese dish. I didn't know it existed all the way back in 1907. For some reason, I thought it was a post-WWII product.

Isn't that the last year the Cubs ever won a World Series?

Chop Suey is first mentioned in an American publication as early as 1888. There is also evidence that the actually originated in China's Guangdong province and was only "refined" in the USA.

And yes, 1907 was indeed the last time Cubs took the Series.

And chop suey, from what I recall, was 'invented' during the California gold rush in the 1850s. The Chinese cooks would throw whatever they could get hold of into a pot and the prospectors took to calling it chop suey. I have no cite on this, but I know I've read about it in several different histories.