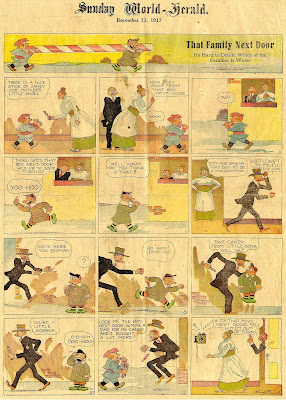 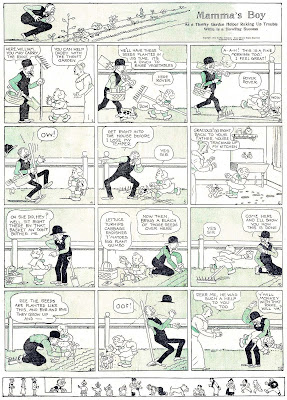 Yesterday our Obscurity of the Day was loaded down with mystery baggage -- today not so much! Cole Johnson makes everything clear. As you can see with his two samples above from the Omaha World-Herald, the syndicate was Hearst's Star Company imprint. So we can just forget that whole Pulitzer angle.

Secondly, Cole says That Family Next Door ended on June 30 1918 and was replaced the next week by Eddie's Friends, the Sunday version of Jean Knott's daily Penny Ante panel.

And, just to throw in yet another wrinkle, as you can see with the second sample above, That Family Next Door was renamed to Mamma's Boy near the end of the run (the sample is dated May 13 1918).

So That Family Next Door is a lot less of a mystery today. There are still unanswered questions though --- on what date did it change to Mamma's Boy and when did the series start? Cole has a December 23 1917 strip, and I have a different undated 1917 strip, but nothing definite there yet.

Comments:
There was a daily strip from about 1923 with the similar title "THE FAMILY NEXT DOOR" drawn by "Sat" Satterfield and syndicated by the tiny BENNETT BROWN company.It was recycled into the 30's in small town weeklies like THE CATSKILL REPORTER.(NY)

In the FAYETTEVILLE BULLETIN in October 1924.Also New York state.

Hi Grizedo --
Is the Fayetteville Bulletin archived online or did you see it on microfilm/in print?