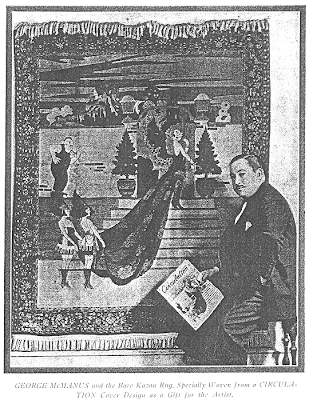 What Jiggs and Maggie Did for George

Quaint Characters Aroused Enthusiasm of Persian Art Connoisseur to Such a Pitch That He Had Made a Beautiful Rug as Gift for Creator of "Bringing Up Father"
(from Circulation, February 1925)
Not least of the advantages of creating a newspaper feature which achieves world circulation is that princes and potentates in remote parts of the world find out about you—and that now and then one of them signifies his estimate of your work in truly princely fashion.

Among the Yule-tide gifts to reach George McManus, creator of "Bringing Up Father," was a silk rug of gorgeous color and texture sent by Ahmad Khan of Persia, a famous art connoisseur and collector who is the most ardent Jiggs and Maggie fan east of Suez.

The rug is a reproduction of a cover drawn for Circulation of February, 1922, and is one of the most unusual specimens of rug weaving ever made in the Orient. It is of silk, about six feet long by five wide, and was woven at the order of Ahmad Khan by the celebrated Abdul Hamid Keshany whose looms have for thirty years produced the famous Kazan-sha silk rugs which are the envv of collectors of modern Persian rugs in every country.

The Jiggs and Maggie rug was sent to Mr. McManus in token of a friendship between him and its donor which had its origin six years ago through a fugitive copy of the China Press of Shanghai which found its way to Teheran, Persia. The China Press is one of the newspapers of the Far East which has published "Bringing Up Father" for a number of years.

Ahmad Khan saw the newspaper and immediately became enthusiastic. He wrote Mr. McManus a letter, care of the China Press, praising the wit and art of the cartoon and expressing the hope that he and the artist might meet some time. The letter was the beginning of a correspondence which has since ripened into warm friendship.

Ahmad Khan was educated at Oxford and visits London and Paris every few years. In the summer of l922 he and Mr. McManus met in Paris, and Mr. McManus gave him several of his original drawings, among them the panel in colors of which the rug is a reproduction.

Experts who have seen the rug pronounce it a specimen of the highest art known anywhere in rug making today. It is in what is called the 30 x 33 stitch, or a hand weave which requires the tying of 990 knots to the square inch. Two years of continuous work by the most expert weavers have been required for its making. Mr. McManus has been assured that its dyes will hold their colors for centuries and that, if he chooses, he may expose it to the strongest sun-light indefinitely without damaging its unrivalled colors or impairing its changeless lustre.

The picture design of the rug shows Maggie in court dress with a long crimson train, walking in majesty up a flight of steps leading to the garden of a palace. Two girl pages hold her train while Jiggs stands aside in old flannel shirt and trousers gazing in amazement at her entry into the precincts of privilege. The background of the picture is a reflection of the fine taste and knowledge of Mrs. McManus, for it was she who suggested to her husband the scheme of castle, hill, and forest which make up its composition.

In the course of their world travels Mr. and Mrs. McManus have been given many rare art objects by friends in many countries. But of all their trophies, though all are rare and beautiful, none quite measures up in magnificence and personal significance with the resplendent Jiggs and Maggie rug from Keshan in distant Persia.

Nt the least part of Mr. McManus's delight in his gift was occasioned by the complete surprise incident to its arrival; for in all the two years it was on the looms its giver never mentioned it, although he wrote from Persia everv month.

Allan's Note: I recall that this incredible rug came up for sale at a comic memorabilia auction back in the 80s or 90s. Being a McManus enthusiast I naturally coveted it, but the price was well beyond my means. Anyone know its current whereabouts? Not that I can afford it now, either...
I do actually have in my collection Jiggs and Maggie represented in rug form, but that's a story for another day.