Strip Teasers: Bringing Up Father From Sea to Shining Sea 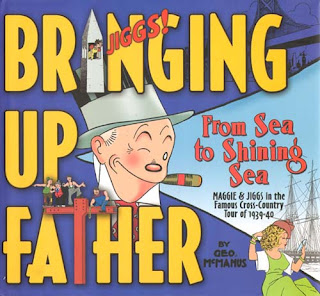 What a wonderful treat to have two high quality reprint books of George McManus' masterwork available after so many years with not a peep from Jiggs. First there was NBM's reprinting of the first two years of the series, both historic and wildly entertaining, and now IDW enters the market with arguably some of the very best of the strip in its greatest era, the mid-30s to mid-40s.

Being a big fan of McManus I'm thrilled with both books, of course. Not only that but I had the privilege of working on both, a thrill in itself. For the IDW book I did the restorations on the majority of the dailies, a job which only increased my admiration for McManus' superb clean-line style.

This whopping fat book reprints not only the famous cross-country sequence of the strip from late 1939 through mid-1940 but also the balance of 1939. While the tour sequence is justly famous, I'm glad editor Dean Mullaney chose also to reprint what might unjustly be called more mundane material from earlier in the year. 1939 is a great example of how humor strips operated back in the days when the adventure strip was king. Instead of strict gag-a-day material, Bringing Up Father and most humor strips weaved the gags into storylines. In 1939 we have the arrival of Jiggs' grandson providing comedy fodder in a long story, plus great short sequences like Jiggs trying to rid himself of an always-snoozing brother of Maggie's and a hilarious series with Jiggs waiting for Maggie to get off an interminable phone call. McManus had a gift for juxtaposing the reasonable and the surreal in these sequences that is magical to behold.

If the book were sold on infomercials this would be the point at which Ron Popeil would gleeful tell you "... but wait, there's more!" Not only do you get a year and a half of Bringing Up Father dailies, but we're throwing in all the Sundays from the same period! Of course the tour sequence just wouldn't be complete without those glorious Sundays, a few of which you've undoubtedly encountered in survey-type books. The Sundays, restored here to their original brilliance, are a joy to behold. Zeke Zekley, McManus' assistant and a master in his own right, claimed that one of the Sundays took them two weeks to produce and I don't doubt it for a second. They are not to be missed.

Rounding out the book we have two intros, by Brian Walker and Bruce Canwell, which supply some interesting nuggets, a subject index by Randall Scott, and a sampling of 11 strips from the Bringing Up Father "Remember When" sequence of Jiggs' and Maggie's younger days in the Irish ghetto (a series which richly deserves reprinting, too).

My impression is that, despite reasonably strong sales, NBM has no immediate plans for a follow-up to their Bringing Up Father book, so if you're a McManus fan then you really need to show the folks at IDW that you want more of this material. This McManus fan certainly encourages you to buy multiple copies!