All N.Y. Poses For Wortman's Cartoons
Straphangers in the Subway and Flappers at Soda Fountains Are Unsuspecting
Models for New York World Artist Who Blends Comedy With Grim
Reality in "Metropolitan Movies" for N.Y. World
by John F. Roche (E&P, 3/23/29)
The pen-and-ink creatures that inhabit comic strips and cartoons are usually grotesque caricatures of genus homo or more restrained sketches representing no one in particular. But people who live and breathe, or rather, their likenesses imprisoned in ink and crayon, perform on the back page of the New York World each morning in Denys Wortman's "Metropolitan Movies." Rotund matrons, leggy flappers, wide-trousered shipping clerks and tired old men and women with the stamp of tragedy on their faces act out in this cartoon the comedy and hardness of daily life in Manhattan's wilderness of steel and stone.

Each character in "Metropolitan Movies" has his or her counterpart somewhere in the five boroughs Of New York; and the streets and buildings which fill its stage are recognizable to most readers familiar with the city. Wortman sketches them as he walks or rides about town in the course of his daily activities.

It would be impossible for him to work any other way, he told the writer, because the actual drawing of the cartoon is more important to him than the caption which it is to illustrate. He is intensely interested in the technique of making pictures and, consequently, works much detail into his cartoons. His method of using ink and crayon, he thinks, makes it possible to obtain such complete reproductions of persons and objects. His completed drawings give almost the effect of half-tones.

"Drawing for newspaper reproduction in the style I use, with so much detail and grades of shading, presents quite a problem," Wortman said. "Combinations of heavy shadows and fine lines are so liable to smudge in newspaper work. But by making the dark spot support the more delicate lines, I think I obtain a result which insures clean reproduction." Wortman makes rough 'note' sketches of anybody or anything that strikes his fancy in his daily peregrinations about the city. The subway, he claims, is a gratifyingly fruitful source for human types. In sketching persons in the underground trains, he tries to cover his activity as much as possible behind a newspaper so his subject will not take notice and become embarrassed.

"Not only am I afraid the person I'm sketching will be embarrassed," the artist confided, "but I become terrifically embarrassed myself, if I'm caught by my subject. I get very fidgety when I work that way."

"Department stores are particularly difficult places in which to make 'notes.' If the floor managers see you, they always request that your stop. I don't blame them either. They don't know what you're up to. Their competitors often send artists to sketch their styles, and they have to be very careful." 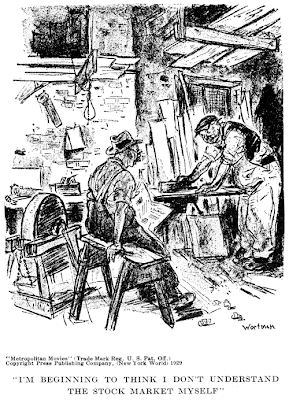 Despite the difficulties he meets, Wortman insists on actual models for his cartoons. He often uses photographs from which to copy buildings or even complete street scenes. In drawing buildings or other structures, though, he departs from his rule of including great detail because he thinks it would complicate the drawing too much for good reproduction. He draws as much as possible of the structure true to form, however, and never invents objects, such as lamp posts, hydrants, houses, wagons or any of the familiar trappings of metropolitan life.

"It's very easy to overlook many small characteristics of familiar things," he explained, "and, consequently, you're liable to draw something that will not be a good representation of what it's supposed to be. There are specialists for every little item you draw, and if you're going in for detail, they're almost certain to pick you up on errors.

"People are, somehow, very peculiar about picking faults in seemingly unimportant matters. For instance, I drew a picture for 'Metropolitan Movies,' not long ago, of three musicians riding home in the subway after a dance. I had made 'notes' of the actual musicians in the drawing about one or two o'clock in the morning. I had also included the background of the subway car in the sketch. Nevertheless I received a note from a reader telling me the sign in the car window, showing the destination of the train, was wrong. He said express trains didn't go to the station named on the sign.

"But that time the reader was wrong, for I had made the sketch after one a.m. when no expresses were running, and the sign in the drawing was an exact copy of that in the local on which I had ridden."

Another incident which shows how closely cartoons are sometimes scrutinized arose out of a Memorial Day drawing Wortman made. It showed a soldier's grave with a mother standing by it. On the headstone, the artist had lettered the name of a boy he knew who had given his life in the World War. After the cartoon appeared Wortman received several letters from persons related to the boy either directly or indirectly. Some of the letters came from middle western cities.

Although the surface of New York life glitters with a thin frosting of comedy, there is a thick layer of heartache underneath, some of which comes to the surface in an occasional poignant drawing of Wortman's. For, like O. Henry, sometimes he deviates from the highway of merriment into the byways of the "seamy side" which most people try to avoid. And he finds that these serious efforts create greater response among readers than his more humorous creations.

"The 'tear jerkers,' as they are called, always draw the most comment," he said. "They seem to appeal to the average person more strongly than comedy."

A particularly appealing picture of life in the crowded districts of the metropolis was drawn by Wortman several months ago. It showed a mother and two children in a dingy, poverty-stricken room in an attitude of apprehensive listening. The mother was looking significantly at the children. She was saying, "I hear him coming up the stairs slowly, so don't ask him if he got a job."

Wortman possesses an understanding of human nature and its many-sided characters more readily associated with authors and philosophers than with cartoonists. It shows itself in his pictures of the less opulent middle class life.

One of these drawings shows an old man and his wife sitting by the window of their tiny flat, presumably watching their daughter on the street below with her beau. One of them says, "He's a real sport, alright. He's taking her in a taxi."

Wortman thinks the contrast between the laughable and the realistic helps to keep his cartoons interesting.

"If I drew all sob stuff," he said, "the public would soon get tired of it, and if I kept up the comedy continuously they would merely take it as a matter of course."

Wortman is primarily an artist, having studied at the Chase School in New York under Kenneth Hays Miller, to whom he says he owes much for his aid in art studies. The Chase is now defunct, but during its period of existence it sired some of the country's best known artists, among them George Bellows, Rockwell Kent, Edward Hopper and Guy Debois, all of whom attended the school at the same time as Wortman.

Before attending art school Wortman had studied at Rutgers University and Stevens Institute of Technology and was well on the road to becoming an engineer when he decided he would rather paint and set aside his compass and plumb line to take up the brush and palette. He still retains a keen liking for mathematics, though, and is greatly interested in new engineering developments.

Taking up painting seriously, Wortman devoted all his time to it and about 10 years ago had produced enough paintings to hold a one-man show at the Daniel Galleries in New York. Later he had exhibits in showings at the Montross and MacBeth Galleries. He has not shown any of his work recently, but dominating one wall of his high-ceiling studio in Greenwich Village, is a large painting which, when completed, he thinks he might enter into an exhibition.

In his spare time he paints portraits or decorates furniture in vivid colors.

Until he was 30 years old, Wortman had never done any commercial art work. His first work in this line was illustrating magazine stories, but after several years he became dissatisfied with this occupation and turned to newspaper work. His first newspaper job was on the old New York Tribune about seven years ago. He remained there for nine months and then went back to free-lancing until he finally joined the World to take over the "Metropolitan Movies" assignment, after Gene Carr, the former creator of the cartoon, resigned. He has been with the World for about five years.

[Allan's note: Metropolitan Movies was syndicated outside of New York as Everyday Movies]

Comments:
This is really great. Thanks for posting, Allan.

And if you surf the Denys Wortman site at http://dwortman.com/ you'll find some Christmas cards to and from The Wortmans. Very appropriate for this time of year.