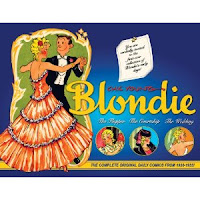 This is one of those reprint books that has been overdue for, oh, about fifty years or so. Chic Young's Blondie, which became staggeringly popular after a rough patch at the start, has long been one of the world's favorite newspaper strips. And the mythology of those early years, years in which the strip ran in very few papers, has long been whispered about not only among serious comics fans but by casual readers as well. We've all heard that Dagwood came from an ultra-rich family, of his infamous hunger strike to win Blondie, and of him turning his back on the Bumstead millions in favor of an air-headed flapper named Blondie Boopadoop.

Yet never during all these years have we seen more than just a fleeting taste of those years, a week's worth of strips reprinted here or there. Rumor had it that the Young estate bore some ill-will to the publication of these early strips, though it seems hard to imagine why. Or perhaps they were holding out for a lucrative publishing deal. Not being on the inside, I don't know what kept these strips out of sight all those years.

But finally Dean Mullaney and IDW have issued the complete story (well, sans Sundays, which oddly follow a different continuity and are therefore sort of beside the point). After facing all the stumbling blocks to the publication, including simply finding all these ridiculously rare strips, the obvious question is whether it was all worth it.  In my opinion, a very mildly qualified 'yes'! On the down side, these early years of Blondie are rather repetitive -- Dagwood is blocked over and over from marrying Blondie in plot lines that can become monotonous in their similarity. Evidently Young, knowing how few papers were running the feature, and that he was being picked up and canceled with regularity, had a tendency to dog it a little in the originality of his stories. However, the same can be said of many humor strips, and if you put this book aside occasionally and come back to it fresh a week or two later, the repetitiveness is far less noticeable.

On the plus side, the stories really are pretty darn funny. There's a lot of slapstick, a lot of airhead flapper humor, and no shortage of punch lines that can still elicit a smile or a guffaw nearly four score years later. And of course there's the allure of Blondie herself, deliciously illustrated by Young as a supremely delectable dish. Blondie still has the 'hot mom' thing goin' on today, but in 1930 she was more like Frank Godwin's Connie, a waif-like vision dressed in translucent chiffons and figure-hugging satins. And speaking of the artwork, we mustn't forget that the great Alex Raymond was honing his cartooning chops assisting during this period. Though undetectable most of the time, it's great fun to discover Raymond's sensibilities popping up occasionally. Nowhere is he more evident than in a sequence with uber-hunk Gil, a car mechanic who threatens to steal Blondie's heart forever in one of the odder stories (Dagwood disappears for several months, signaling that perhaps Young had cold feet over the durability of his Dagwood character).

As is usual with Mullaney-edited reprint volumes, the reproduction is excellent, the strips printed reasonably large (reduced only about 15% from their original printed 6-column size) and the restoration sensitive and thorough. Add to that an interesting Brian Walker intro illustrated with some rare ephemera of the strip, and you have quite an attractive package. Hopefully a second volume will appear so that we can see just how the scatterbrained, head-over heels in love pair adapt to married life and the loss of the Bumstead fortune.

Comments:
Ah, the lost ark of comics continuity. I look forward to seeing this one, thanks for the heads up!