Back in the Past
by Henry C. Williamson (Cartoons magazine, April 1913)
As an artist the shortcomings of Bernhard Gillam were many, but he was a brilliant cartoonist nevertheless, and, despite his artistic failings, he hit the nail on the head, when driving home a cartoon idea, more often than many of his technically clever brothers in the work. 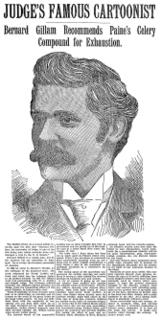 knew of his failings and he was extremely sensitive to criticism. He resented being told that any of his work was out of drawing. He was once mortally offended by one of his fellow artists on the staff of Puck, who, being a new arrival and unaware of Gillam's feeling on the subject, remarked to the cartoonist, "Gillam, if your salary ever gets as much out of drawing as some of your pictures do, even with the assistance of the cashier, you will never be able to gain anything like a fair idea of how your account stands with Puck."

No hatter in the world would ever be able to secure designs for new models from the hats that Gillam drew, for the pictured hats were impossible, and never appeared to fit the wearer, and very often conveyed the idea that the owner had made the purchase of his headpiece in a place where they sold liquid refreshment and as much as one cared to carry away.

But with Gillam it was not so much the perfect drawing as it was the idea, and he was gifted when it came to selecting the telling picture that would convey a lesson on the subject to be exploited in a cartoon. His pictures were always the drawings of original ideas and his admirers always waited to see how Gillam would handle the next big question.

His "Puck's Dime Museum" might be cited as an instance. In the boom days of the dime museum period one of the greatest of the freak attractions was the "Tattooed Greek." In the tattooed man Gillam found the inspiration for one of his best ideas.

President Arthur's term was drawing to an end and the Republican party was discussing its presidential possibilities. There were many statesmen in the party ready to step forward and accept the nomination. Lightning rods designed to attract the convention's bolt were being insulated in all political camps and the presidential bee buzzed merrily.

John A. Logan, Roscoe Conklin, and James G. Blaine were the leading candidates for the nomination, and, turning the entire collection into a dime museum list of attractions, Gillam turned them into bearded ladies, ossified men, jugglers, and other freaks. He scored his triumph when he hit upon Blaine as the tattooed man. 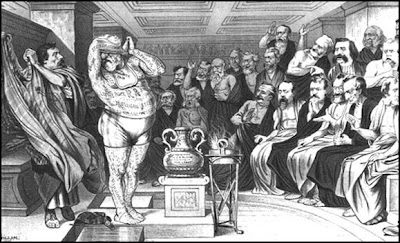 There were certain scandals brought out when Blaine was pushed forward as a presidential possibility, and Gillam pictured him with the scandals interwoven with the many tattoo marks.

The "Tattooed Man" cartoon scored with its first appearance and became one of the features of the campaign.

Gillam was born in England in 1858. His parents brought him to New York ten years later. He studied for three years in the schools of New York and Brooklyn, and then, though still a child, he decided that he would become a lawyer, and took up the study of Blackstone.

He became interested in drawing about this time and found that art work appealed to him far more than did the study of law, and, as he improved in his art work, he finally decided to abandon the law books and turn to an illustrator's work.

He began by taking up the study of wood engraving, and in a short time was able to secure employment as an illustrator of some of the serial stories being printed in many of the weekly story papers. This work alone did not bring him enough for his support, so he filled in the spare time by making crayon and oil portraits, designing show cards, and doing whatever wood engraving jobs that he was able to pick up.

He found that he was meeting with remarkable success in his portrait work, although his pictures were bringing him but little, and he decided to make the work worth while by devoting his entire attention to it. He sought out an instructor and his improvement soon became marked. A painting of the Rev. Dr. Ward Beecher, the famous Brooklyn minister, brought him local fame as a painter and orders for pictures poured in.

Gillam, however, soon tired of the color tubes and brushes and again turned his attention to newspaper illustrating. He secured a position on the art staff of Leslie's Pictorial, a paper owned by one of Frank Leslie's sons, and here he did general illustrating work. Later he was put to doing caricature and comic work.

His caricatures and his apt illustrations of the humorous stories attracted the attention of other editors and he was offered a position on the Graphic. The inducement was enough to win him from Leslie's Pictorial and he made the change, but he had not been on the Graphic long before Frank Leslie saw a promising cartoonist in young Gillam and secured him for Leslie's Weekly.

On Leslie's Weekly his work steadily improved and his cartoons compelled attention. Nast was the cartoonist for Harper's Weekly at this time, and there was considerable rivalry between the followers of the two men. Gillam's friends always insisted that he was doing work as attractive and effective as that of Nast.

Gillam's work on Leslie's Weekly did not escape the attention of Joseph Keppler, the editor of Puck, who was constantly reaching out and securing new talent for his comic weekly, and overtures were made to Gillam by the publisher of Puck. Gillam finally accepted a flattering offer and in 1881 went from Leslie's to Puck.

On Puck Gillam worked but a few months before he had made a national reputation. He became known as one of the most forcible and, at the same time, mirthful political cartoonists of the country, but at the crest of his success Joseph Keppler died and Gillam's work fell off. Keppler had been his good friend and confidant, and the cartoonist was deeply affected by his death.

About this time James A. Wales and several others organized a company for the purpose of beginning the publication of another comic weekly—Judge—and Gillam was asked to become a member of the company. With Keppler dead, he found nothing to bind him to Puck, so he accepted the invitation and cast his lot with the new publication.

Bernhard Gillam was a gifted man in many ways. He was a great student of Shakespeare and, blessed with a remarkable memory, he was able to read whole plays of the immortal bard.

Comments:
In the 1870 U.S. Federal Census, Bernhard Gillam was the fifth of eight children born to Sewell and Lucy. Bernhard was his middle name, William being the first. They lived in Williamsburgh, Brooklyn. In 1880 the Gillams lived in Brooklyn at 239 Sackett Street (the Cobble Hill neighborhood). Gillam's occupation was "Portrait Artist", which was the same as his younger brother, Fred Victor, who was on staff at Judge, for 20 years, according to the New York TImes. Munsey's Magazine, February 1894, wrote this, "Victor Gillam is a better draughtsman than his brother, although not nearly so prolific in ideas."

from Publishers Weekly, Jan. 25, 1896
Bernhard Gillam, the well-known cartoonist of Judge, died in Canajoharie, N.Y., January 19. He was thirty-eight years old. He was born in Banbury, Eng., October 28, 1856. When a mere child his father, a furnaceman, came to New York. Since Mr. Gillam was fourteen years old he was interested in art. His first work was done for an ephemeral called Wild Oats. The pay he received for this work was so small that he resolved to give up sketching altogether...

from the Worcester Daily Spy, Jan. 20, 1896
Bernhard Gillam...died this morning at the home of his father-in-law, ex-Senator James Arkell, of Canajoharie [N.Y.]. His death was the result of typhoid fever….

…He was always drawing things—the faces of people he passed on the street, the teachers, and his companions at school. He had great ideas of doing wonderful pictures of tragedy, but no one admired his attempts at such high work, although everyone laughed at his caricatures….

…About seven years ago he married the youngest sister [Bertelle] of his business partner, W.J. Arkell. There is one child [a girl] of this marriage, now two and a half years old.

…He was the first man at the editorial rooms of Judge every morning, and the last to leave at night. When he was not bending over his own work, he was advising, encouraging, directing. He read until far into the morning, and was easily astir.

…In personal appearance he was slight, dark and very pale. His eyes were clear and penetrating, his hair and moustache almost black. His quick, nervous movements indicated the restless energy of his character.

from the New York Times, Jan. 21, 1896
…When still a young man, Bernhard Gillam entered a lawyer's office and studied law until his employer found that he spent his time making caricatures.…

from the Daily Inter ocean, Jan. 27, 1896
A conference between W.J. Arkell and the leading artists of Judge…was held last night, and plans for the future conduct of the weekly were arranged. Mr. Arkell…said: "You may say that the policy of Gillam in connection with Judge will follow as closely as possible, and the artists of his own selection will carry on his work. His cartoon assistants, who have been scattered, will be brought to the home office. Gillam received a salary of $25,000 a year and a percentage of the profits from the paper. I have decided to divide this equally among the staff artists who have been on the paper ten years." Mr. Gillam willed all his property to his wife. His estate is valued at $250,000.