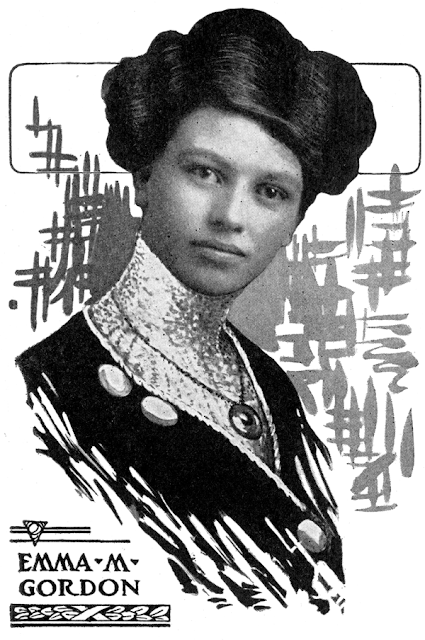 Out in Minot, North Dakota, a little woman is teaching a district school. The teacher is well satisfied with her work, but, when the school day is over and the necessary hours have been given to the task set for her by the district board, this little woman takes up her drawing board and her pencils and sitting alone in her little room looks out across the wide expanse of a snow-covered country and dreams.

The district school house fades away and she is in a newspaper office hard at work on a cartoon that with each stroke of the pen shapes itself into a direct appeal to the women of the new day. Men may not understand it, but the women will, for it is a message from a woman to the women.

It is only a dream now, but Miss Emma M. Gordon, district school teacher in Minot, N. D., is sure that the dream is to come true. School takes up many hours of her day and the planning of future work takes many hours of her evenings, but still she finds time to work at her drawing board training herself for the future.

Already she is a cartoonist, and her drawings are appearing regularly, but she is not satisfied with her work, and so she continues with her school and devotes her spare hours to her cartoons.

Miss Gordon is a socialist, and she believes that when she has had an opportunity to speak to the women through the medium of her cartoons she will have many converts to her cause. She believes that the woman of today is a thinking being, not a stolid household drudge, and she is convinced that women cartoonists alone will be able to appeal to the women.

"Women," she says, "are today entering fields which for centuries have been occupied mainly by men. In many branches women, yea, children, are taking the places formerly held by men. Look at our factories, our mills! 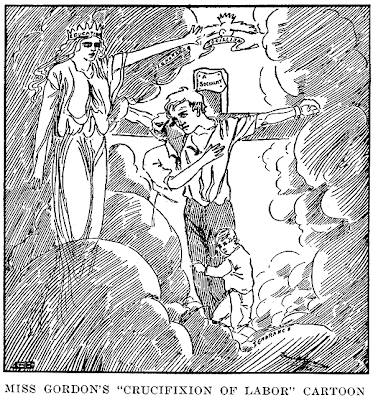 "Can we not in this field show up by cartoons our present industrial system which takes the lives of men, women and children, and grinds them up into so much profit?

"Women are home-lovers. Capitalistic newspapers have given them the impression that Socialism will destroy the home. That's an old bogey, used by Capitalism to frighten men and women away from Socialism. The way to treat 'bogeys' is to walk right up to them and investigate them.

"The  pen  of the  cartoonist   is  the  weapon  that  should  be  used  in ripping open these shams and a woman cartoonist working for the cause of Socialism could be able to present the woman's point of view in regards to our industrial, social and political questions.

"Of all the women I have ever talked with about Socialism these four objections—free love, against religion, destroying the home, and "dividing up"—seemed to be the only objections women have to Socialism. Can not some cartoonist—a woman—educate them to a knowledge of Socialism by destroying these bogeys? For they are but bogeys continually brought forward by the enemies of Socialism and bogeys that I could make short work of if space permitted.

Miss Gordon was born in Visnaes, a little town in Norway. When she was still a child her father died and the family removed to Haugesund on the west coast of Norway. There she lived an open air life, learned to love the sea and the mountains and the independent spirit of the natives. She was nine years old when the family left Norway for Minnesota. She lived in Glenville, Minn., until she was eighteen years old, when she accepted a position as teacher in a North Dakota district school.


[Allan's note: Emma Gordon seems to have gone on to a career in fine art; later bios don't mention her interest in cartooning]

But ain't she just the cutest li'l Commie?

Emma Marie Gordon was born in Visnaes, Norway on January 29, 1889, according to her U.S. Naturalization Record which was processed on December 14, 1945. At the time she lived at 2005 Hillside Avenue, in Minneapolis, Minnesota.

In the 1900 U.S. Federal census she lived with her mother, Bertha, and older brother, Amos, on Main Street in Glenville Village in Shell Rock Township, Freeborn County, Minnesota. According to this census the family immigrated in 1897 but in subsequent census records the date is 1898. The "Cartoon" article said Gordon was 18 years old when she moved to North Dakota to teach; the year would have been 1907.

Gordon lived in Soo, North Dakota, near the Canadian border, in 1910. Her occupation was "Teacher" at a "Public School". According to the book, Minnesota Prints and Printmakers, 1900-1945, "Gordon was a student at the Minneapolis School of Arts in 1913 and 1914. She won a scholarship and several awards there."

The 1920 census has Gordon and her mother in Minneapolis at 2440 13th Avenue. The census enumerator recorded Gordon's occupation as "Art Girl" employed at an "Art Shop". Minnesota Prints and Printmakers, 1900-1945 said, "In 1921 she entered the Annual Exhibition of the Work of Local Artists at the Minneapolis Institute of Arts; three of her submissions were accepted." Also in 1921 she copyrighted five prints.

Mother and daughter were at the same address in 1930. Gordon was an "Artist" in the "Commercial" industry. "In the 1930s and 1940s she is listed in the Minneapolis City Directory as an artist or commercial artist. (The one exception is 1941, when she is listed as 'Artist, Walker Art Center.')", according to Minnesota Prints and Printmakers, 1900-1945.

The date of Gordon's passing is not known.

I can't let Cole Johnson's blanket putdown of women artists pass without comment. Many talented and skilled women have made successful careers both in illustration and cartooning.

Part of the reason there weren't more of them was the patronizing attitude expressed in this article about the "little woman" and her cartoons.

Having said that, this sample still isn't a very good drawing. Gordon was still young; maybe she improved over time. Or maybe she didn't.

What surprises me is how non-judgmental the article is about the little lady's politics. Even in 1913 socialists seldom got a pass in the mainstream media.

An interesting sidelight is the heavily retouched photo. I have an old commercial art instruction book with a section about retouching photos for newspaper reproduction. It essentially tells you to paint out everything but the head, then go back and paint in "better-looking" clothes and background. To me the results always looked lousy, no matter how poor newspaper reproduction was Gordon's portrait is no exception.

Calling her a 'commie' is cute, but she's listed as a Socialist, not a communist. Potentially a big difference- especially back then when each of those parties hd large numbers of adherents compared to today. Remember that the Communists collaborated with the Nazis to bring down the Socialists in thirties Germany.
-omf

Thanks for posting this interesting story. I had noticed that Cartoons Magazine featured a number of women cartoonists during those years.