[Alex Jay contributes this piece about cartoonist Cy Long who was killed by a lightning strike shortly after the syndication of his first newspaper feature, Mose Bones, began. While Mr. Long was no budding cartooning genius -- his embarrassingly bigoted strip does nothing to enhance my opinion -- this is some very rare and interesting material about a beyond-obscure strip and a creator who seems to have gotten some early success based mostly on chutzpah and enthusiasm.

Note that all the samples are from microfilm sources, so the quality is low, but the best we can do. Also, notice that one sample includes a different comic, Who Stumbles Most Dances Best by someone named Acker -- so having learned about one obscure cartoonist, in the process we find another unknown. Isn't it always the way... (see comments at bottom for info Alex has since gathered on this oddball item). 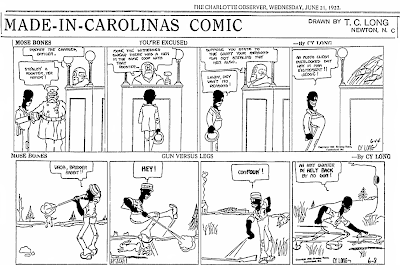 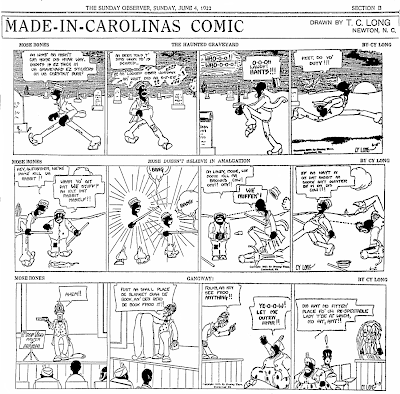 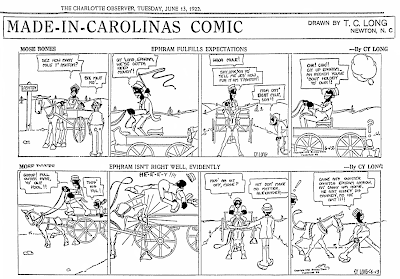 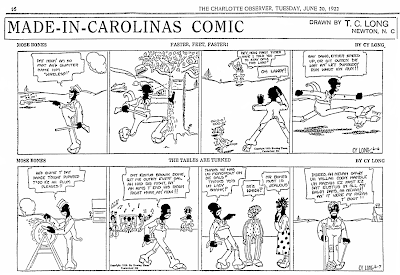 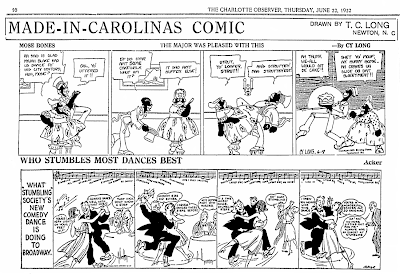 Thomas Cyril Long was born in Old Fort, North Carolina on December 29, 1897, as recorded on his death certificate. He was the only child of Luther, a life insurance agent, and Theresa. According to the 1910 U.S. Federal Census the family lived on Main Street in Newton, North Carolina.

Cyril was the preferred name as recorded in the censuses and the Charlotte and Greensboro newspapers. Beginning in 1914 the society pages of both papers reported on his violin playing, travels, college comings and goings, and other activities. He signed his World War I draft card on September 12, 1918; he was a student at the time. In the 1920 census the Longs still lived in Newton, at 1306 North Main Street.

Long's interest in baseball was noted in the Charlotte and Greensboro newspapers in the spring of 1922; he was an umpire. June saw the publication of his comic strip, "Mose Bones". On June 6 the Charlotte Observer picked up the announcement from The Hickory Record:

The newspaper public in various parts of the South will be introduced today to "Bones," a new comic strip prepared by Cyril Long of Newton. Some of Mr. Long's friends realized that he was a genius at drawing, and their pleasure will be increased by the publication of his strips. The Record is glad to be able to run "Bones" and it trusts that its readers, many of who know the young author personally, will remember that they were not done in New York, but in Newton. It's good work as Mr. Palmer, sketch artist of The New York World, remarked when shown the advance copies in this office the other day. Here's hoping that "Cy" will sell every paper in the country.

Long drew about a month's worth of strips, each of which were dated consecutively beginning with June 1, but they were printed out of order in the Charlotte Observer and Greensboro Daily Record. For example, the Observer printed the June 2, 3, and 5 strips together on June 4th; the June 1 strip appeared the next day. The Daily Record printed the June 24 strip on the 19th. The Observer published the news of Long's sudden death on the front page, July 2, 1922.

Thomas Cyril Long, better known, especially among newspaper men of the south and east, as "Cy" Long creator of the comic cartoon strip of negro characters, including "Mose Bones," was killed by lightning while participating in a baseball game at or near Newton, N.C., his home town, Saturday afternoon, according to information received from Newton by telephone.

The body will be taken to Wilmington, N.C. former home of Mr. Long's mother, where funeral services will be held Monday morning according to information received in Charlotte.

Mr. Long was about 24 years of age, was the only child of Mr. and Mrs. Luther F. Long, of Newton, his father being a well-known insurance man of that town. Deceased was an alumnus of Catholic university at Washington, to which institution he went after completing the course at Belmont college, Belmont, N.C. He was a young man of high ambitions, energetic, of pleasing address and manner, and very popular among those who knew him.

Only the past week he returned to his home at Newton for a few days after completing a tour of the southeast and as far north as New York City, introducing his new comic, to which he had devoted most of his time and thought during recent months and on which he had been working several years. He was enthusiastic in his belief that his comic, the first in the country based upon the dialect and character of the southern darkey [not by a long shot-ed.], would prove a great success, and he had received much encouragement from newspaper men throughout the southeast and in larger cities north.

He had made arrangements with a publisher at Cumberland, Md., to prepare his cartoons for his newspaper clients and was just conducting a campaign to place his comic in the larger papers of the south and east generally. He was in The Observer office Thursday night and had a conversation with the managing editor about his cartoon, which had been recently published at intervals in this paper. The Observer has a number of the comic strips on hand for publication.

The first news of Mr. Long's death to reach Charlotte came by long distance telephone in a message from his father to O.A. Williams, Jr. of this city, a close personal friend and former school mate of the deceased.

On July 5, the Observer printed this tribute:


The Nipping of a Genius

Of a verity it was a case of genius nipped in the bud when Cyril Long, of Newton, made answer to the sudden summons. This young artist had developed a talent for cartooning and The Observer is moved to happy reflection that it was the first paper to which he made advances and that it received him cordially, seeing in the character of his product a case of native talent which called for encouragement. He gave promise of development in the illustrated field to position similar to that held by Joel Chandler Harris in the dialect field and his "strips" were developing a popularity of the sort that has been accorded the older established cartoons of Mr. Jiggs and publications of the kind. His talents had become recognized by the newspapers in general and he was on the way to closing contracts which would have extended his fame throughout the land. The tragedy of his taking off was of the sort that could not fail to arouse painful contemplation.

Comments:
What a sad story, to be killed at such an early age, a month after his first touch of success. Long had a kind of Joe Farren-ish style which might have really developed into something. (He may have developed a more advanced sense of humor, as well.) -----------------What is the syndicate on the mysterious "Acker" strip? I can't read it from this distance. The oddly specific title makes me think it could be an entry in one of those polyonymous/polyunsaturated/polystyrene/polynrpals strips. -----Cole Johnson.

Sorry, Cole, I couldn't read it either, even at high resolution. It could be {something} News Bureau, but I'd need magical CSI software to be taking more than a wild guess.

New interesting info from Alex on the Acker strip:

"I think I have the story behind the strip Who Stumbles Most Dances Best. This strip was really an ad for a new song titled "Stumbling", and a Broadway dance couple. The Trenton Evening Times (August 15, 1922) article tells the story of the song "Stumbling", and the couple who sought to capitalize on it. The Rockford Republic (August 12, 1922) published a photographic sequence of the couple in action.