My recent posts about two of Hans Horina's features, Hungry Tommy and Absent-Minded Aunt, stimulated some interest. Horina's great-grandchild left a short note on the blog and we hope to hear more from him/her soon. Alex Jay, our resident genealogical snooper extraordinaire, did some digging and submitted the following about the cartoonist: 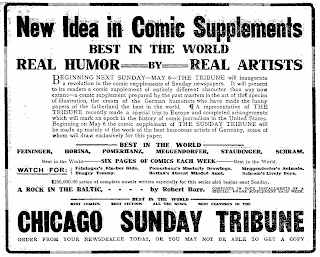 Han Horina was born in Bohemia on May 13, 1865. That information was recorded on his naturalization card from the U.S. Department of Labor, Immigration and Naturalization Service. The card said he arrived in the U.S. on March 6, 1906.

Horina and other well-known German artists were brought to the U.S. by the Chicago Tribune in early 1906. The Tribune advertised the new six-page comics section, featuring these artists, which was set to debut on May 6.

Within months, Horina's earnings allowed him to bring his family, living in Horn, Austria, to the U.S. His wife, Marie, and children, Fritz, Elisabeth, Hans and Ernest, departed Hamburg, Germany on June 7 aboard the steamship Kaiserin Auguste Victoria. After stops in Cuxhaven (Germany), Dover (England) and Cherbourg (France), the family arrived in New York on June 18, as recorded on the passenger list.

The Tribune eventually let go the group of German artists. According to one of Horina's great grandchildren, "Hans could not afford to go back to Austria, so he began doing artistic work for postcard companies." In the 1910 U.S. Federal Census the Horina family resided in Northfield, Illinois, a northern suburb of Chicago. His occupation was artist working at home. The census revealed that Horina had changed his first name, Hans, to John. Horina's naturalization card confirmed the name change. He was naturalized on January 30, 1913; at that time he lived in Shermerville, Illinois.

According to one of Horina's great grandchildren, "Hans moved his family to Louisville, KY which had a big German community." Horina found work, as an editor, at the German language newspaper, Louisville Anzeiger. He is mentioned on page 532 in the book, The Encyclopedia of Louisville (University Press of Kentucky, 2001); below is an excerpt.

In the hysteria of anti-German feeling during the war years of 1917-18, the Anzeiger's masthead included the statement, "A Loyal Patriotic Newspaper, Published Solely in the Interest of American Ideals and Principles." Its
editor, John F. Horina, was required to submit an English translation of editorials to an official of Jefferson County before their publication.

(That page in its entirety can be previewed at Google Books by searching without quotes, Louisville Anzeiger John F. Horina.)

He also published a book, War Cartoons: Pictures About the War for Sympathizers with Germany and Austria-Hungary (Allan's note: I cannot find any trace of this being published, but then again I've lost my access to WorldCat - woe is me).

Horina's sudden passing was reported in the newspaper, Kentucky Irish American, page four, on December 28, 1918. (The article can be found at the Library of Congress web site, Chronicling America, enter without quotes, John F. Horina, in the search box labeled, with the phrase.)

Profound sorrow pervaded Catholic circles when it became known that John F. Horina, editor of the Anzeiger, had suffered a fatal stroke of apoplexy early Saturday morning at his home, 4506 Euclid avenue. Deceased was a
native of Austria and was a prominent figure in newspaper circles, being a cartoonist and writer of much ability. Mr. Horina is survived by a daughter and his wife, Mrs. Mary Horina, and two sons, who are with the American
forces. He was a member of the Concordia Singing Society, the St. Joseph's Orphans Society and numerous Catholic organizations. Tuesday morning the funeral was held from Holy Name church. Father John O'Connor celebrating the requiem high mass.

After Horina's death, the family carried on. In the 1920 census the Horinas lived at 4729 Southern Parkway. Marie was the head of the household. Fred was married to Clara; eventually they moved out. In the 1930 census the family lived at 4706 Second Street, with Marie the head of the household. John and Ernest were single; Elizabeth was married to Rodolf [sic] and they had two children, a boy and girl. According to the Social Security Death Index, Ernest passed away in December 1965; John in October 1980; and Elizabeth in February 1985.

Comments:
WorldCat lists two copies of "War Cartoons: Pictures About the War for Sympathizers with Germany and Austria-Hungary"; here's the link, www.worldcat.org/title/war-cartoons-pictures-about-the-war-for-sympathizers-with-germany-and-austria-hungary/oclc/83810743

Ah, thanks for the link Alex. I didn't even know WorldCat now allows for personal accounts; used to access with a library password that finally went out of date.