Herman J. Leipziger traveled twice to the United States. On the second trip, in 1881, he established himself and, a year later, sent for his family. The Leipzigers sailed aboard the S.S. Cassius from Stockholm, Sweden to New York City; they arrived on June 16, 1882 and were greeted by Herman. According to the passenger list the family included his wife, Hanna, and their children: Simon, Sara, [Frederick] Isak, Georg, Nathan, Leopold and Emil. The next day the family made their way to Detroit where Hanna had relatives (for details go to Magical Past-Times to read Nate Leipzig's autobiography). Herman was listed in the Detroit City Directory 1882; he was a clerk and resided at 52 Abbott. 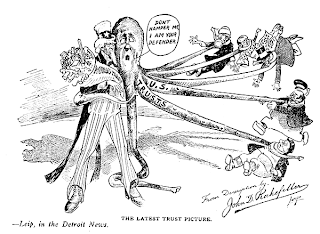 Frederick Isaac Leipziger was born in Stockholm, Sweden in December 1869, as recorded in the 1900 U.S. Federal Census. (According to Find a Grave, the day of birth was the 15th.) His occupation was cartoonist. The household consisted of Hanna, Frederick, Nathan, Leopold and Samuel, her nephew.

According to the 1910 census, Leipziger and Hattie married in 1906; they had a son, Howard. They lived in Detroit at 287 Commonwealth Avenue. His occupation was cartoonist at a newspaper. The book, Family Trails: Michigan Source Material, Ethnic Studies in Michigan, Volume 3, recorded two family tragedies: on October 17, 1910, Howard died ten days after the birth of his brother William, who died three years later on December 28, 1913.

Leipziger was listed in the Catalogue of Copyright Entries: Pamphlets, Leaflets, Contributions (1912) on page 1045:

Doings of the Van Loons Sundays and dailies can be viewed at Chronicling America, enter "F. Leipziger" in the search box. 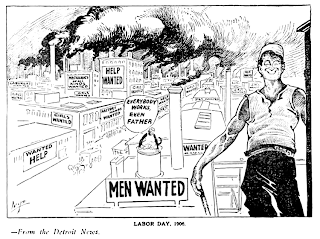 Leipziger, a Mason, was listed on page 403 of the book, Transactions of the Grand Lodge of Free and Accepted Masons, of the State of Michigan (1918).

In 1920 the Leipzigers lived in Highland Park, Michigan at 123 Rhode Island Avenue; the couple had a daughter, Jean. His occupation was salesman in the coal industry. Apparently, Leipziger's brother, Nate, and his wife resided at the same address for a period of time; that address was on Nate's World War I draft card. He was a magician who toured as "Nate Leipzig" on various theater circuits and aboard.

In 1930 the Leipziger family had moved back to Detroit at 3752 Cartes Avenue. Leipziger's occupation was salesman in the real estate industry. His brother, Leo, a cigar salesman, lived with them.

Leipziger's passed away November 27, 1935 according to Find a Grave. His wife died in Southfield, Michigan in May 1968.