William M. Goodes was born in Portage County, Ohio in March 1857; his birthplace was reported in a Philadelphia Inquirer obituary, and the birthdate was recorded in the 1900 U.S. Federal Census. In the 1860 census Goodes was cited as the youngest of two sons born to Edward and Annie; they lived in Philadelphia, Pennsylvania. His father was a painter. 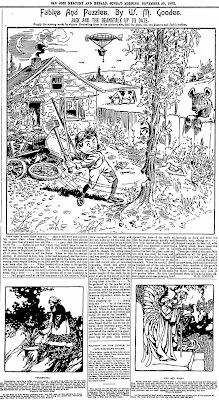 In 1880 Goodes was married to Margaret, and they had a two-year-old son, Edward. They lived in Philadelphia at 1531 21st Street. His occupation was lithographer. On Easter 1889, elections were held in Protestant Episcopal churches; Goodes was elected to the vestry at St. Albans in Roxborough. 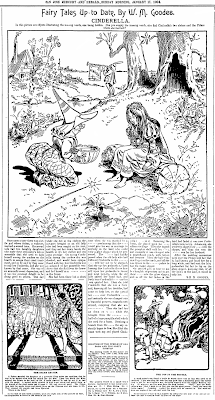 The Goodes lived at 6908 Ridge Avenue in Philadelphia according to the 1900 census. The household included a daughter, Mary, and a nephew, Edward Wigner. His occupation was artist. For newspapers he did a hidden-picture  and text story feature called "Fables and Puzzles", and "Fairy Tales Up to Date", which ran  in 1903-04. Two comic strips he produced for the Philadelphia Press, from 1905 to 1906, were "Beppo and Bruin", and "Mr. Genius".[he also contributed to the Philadelphia Inquirer and New York Herald -- Allan]


Goodes's address did not change in 1910. He had been married for 33 years and was an artist doing illustration. His son had moved out and his brother, Thomas, had moved in. Goodes passed away on April 15, 1919. The Evening Public Ledger (Philadelphia, Pennsylvania) reported his death on April 16:

William M. Goodes
Artist and Illustrator Dies at His Home in Roxborough


William M. Goodes, an artist, whose original ideas and skill in sketching won him wide fame as a comic illustrator and cartoonist, died yesterday after a week's illness of uremia at his home in Roxborough.


He was born sixty-three years ago in Portage County, Ohio, while his parents, who were Philadelphians, were living there. They returned to this city with William when he was two years old. Mr. Goodes began his career as a lithographer, and while following that line took courses in the Academy of Fine Arts. Soon after he was placed in charge of the art department of the John D. Avil Company. While connected with the Historical Publishing Company he illustrated the Henry M. Stanley book, "African Jungles." He also illustrated Bill Nye's last work, "Comic History of England." For a time he was associated with George V. Hobart when the playwright was writing comic sketches.


For twenty years he contributed the comic sketches for Lippincott's Magazine. Other publications to which Mr. Goodes was a frequent contributor included Puck, Judge, Harpers' Round Table, Texas Siftings and the Century. He followed his profession until his last illness.


Mr. Goodes when a young man was a member of "the State Fencibles" and served with that command in the Pittsburgh riots. He is survived by a widow, Mrs. Margaret E. Goodes; a son, Edward A. Goodes, and a brother, Thomas A. Goodes. 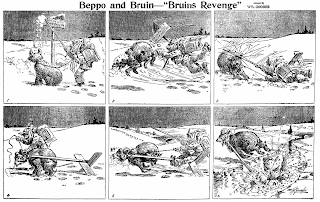 Some of Goodes' Lippincott's Magazine work can be viewed at Yesterday's Papers.