Obscurity of the Day: Sporting Adventures of Mr. Reginald Fitz-Noodles 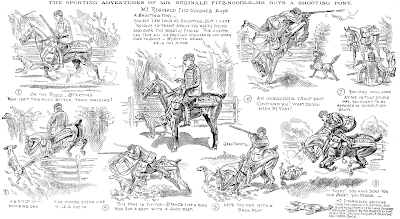 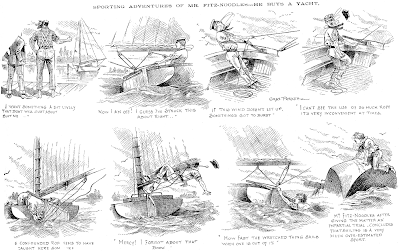 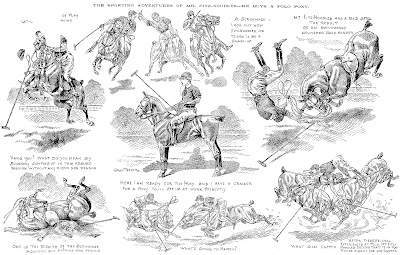 From the deepest recesses of Cole Johnson's collection, he has unearthed The Sporting Adventures of Mr. Reginald Fitz-Noodles. This one's so old it probably qualifies for radio-carbon dating. However, to save the expense, we'll just look at the dates printed on the pages (in Sanskrit, of course) and report that this series ran in the New York World from August 5 to September 19 1897.

This series penned at the dawn of the comic strip boom was by a fellow named Gray Parker. Though he doesn't have any other series credits, Cole tells me that he was a regular contributor to the World's Sunday section in those antediluvian days. The fellow's got a really strong art style, and he knows how to present a gag, so too bad he didn't stick with the newspaper cartooning business. Of course he would have had to learn to refrain from blasting dogs with a shotgun for comedic effect. I say, old fellow, bad show, bad show indeed.

Comments:
Clarence Gray Parker was born in France in November 1847, according to the 1900 U.S. Federal Census. A passenger list recorded his arrival, in New York City, on July 27, 1870.

In the 1880 census, he, his wife Louisa, and son Dudley, lived in Jersey City, New Jersey at 257 York Street. His occupation was artist. The census said his parents were born in England. Parker's wife passed away on May 18, 1890 according to a death notice published in the New York Times on May 20.

Parker and his son resided at the same address in the 1900 census. His occupation was illustrator. A death notice for Parker was printed in the New York Times on January 22, 1910.