A Closer Look at Detective Riley

Alex Jay sends a wonderful assortment of Detective Riley strips, an obscurity we first discussed the other day. Following are some of the many faces of the weekly dick.

Strip numbers 83 and 84, done in a pleasant semi-cartoony style. Looks a little like Ben Batsford work, but he was gainfully employed elsewhere at the time. There's something about that drawing of Private Buck in the last panel of #83 that I feel should be the big clue, that distinctive pose and the style of the face seem really familiar.

Strip number 85 welcomes in a new artist, who preferred a more realistic style. This guy used swipes for practically everything:

Strip #133, and our same swipist has taken a real shine to Alex Raymond. Is there any part of this strip that isn't a direct Raymond swipe?

In December 1937, another abrupt change. H.T. Elmo himself is now the cartoonist, and takes credit for them too (numbering obscured, probably #144 and 145). Elmo was woefully unsuited for drawing a realistic adventure strip:

In January 1938 (numbering also obscured), Elmo is still struggling away but no longer feels the need to take credit:

In February 1938 (again, number obscured) either we have another new artist, or Elmo decided to do some swiping of Chester Gould. My guess is that it is still Elmo here because of the distinctive lettering style.

Finally, here is the man himself, H.T. Elmo in a 1925 passport photo. Thanks so much to Alex Jay for submitting this interesting material! 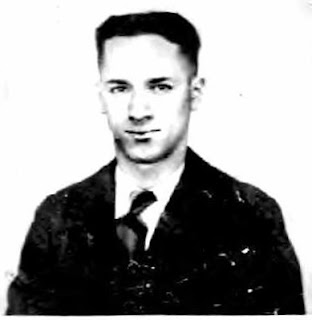 Comments:
Hello, Allan--I'm getting an Ed Whelan vibe on the later episodes.

I can see where your Wheelan vibe reverberates from, but it's Elmo for sure in my book. The eyes, the poses and even the lettering all point to Elmo for me. Duel at dawn?

I like the layout of the first panel in the second strip. It looks as if the MP is addressing the Chinese servant! Riley in disguise?

Elmo's Gould fixation started earlier than you indicate...that sure looks like Steve the Tramp in the first strip and a typical generic Gould cop in the third.

I posted this last week about the Lincoln newspaper features strips but it seems to have vanished. Other titles from their syndicate I have found are
FACTS YOU NEVER KNEW!!! by Bob Dart
DID YOU KNOW? by Topps
NAPPY by Irv Tirman
SOCKO THE SEA DOG by Teddy
all running in a few papers from 1939-44.

I have printing plates of Sally Snickers which have the H.T. Elmo name on it. It also has Jackson for a name and H.T. Omle (Elmo backwards) which was a Iger/Eisner trick to use other pen names for them to look like they had more cartoonists than they really had. I understand that Jack Kirby did the Sally Snickers strips for H.T. Elmo along with "That's Amazing" which does not have a cartoonists name, but it looks like Kirby's work. Any corroborating information in that world of comic information you have?
Joe G