(Starting this week, the first of five profiles of cartoonists who had links to Bud Fisher, the man behind Mutt and Jeff. Each cartoonist's circuitous connection to Fisher will be told with long-forgotten or little-known facts gleaned from numerous books, newspapers, periodicals and databases. And most of the cartoonists had a hand on the Mutt and Jeff strip. Look out for a few surprises! --Alex)

Thomas Joseph McNamara was born in San Francisco, California on May 7, 1886. Little is known about his childhood. In Edan Hughes' book, Artists in California, 1786-1940, he wrote, "Tom McNamara studied at the Mark Hopkins Art Institute and began his career as an illustrator for the Chronicle at the turn of the century." (One of the book's sources is an obituary published in the San Francisco Chronicle on May 20, 1964.)

The first San Francisco newspaper Tom McNamara worked for was the Chronicle, where he made "frames for society pictures."

Next we hear of him "rustling all sorts of jobs in a boom mining camp somewhere in Nevada; Later I went to Salt Lake and worked on the Herald; went to Denver, and from there started out in a vaudeville sketch under the team name of Mack and Marcus—I was Mack—in which we traveled all over the United States, and finally went to London, where we played one night for the late King Edward VII. When we came back home the team dissolved, and I started on the New York Journal. I'm there yet." 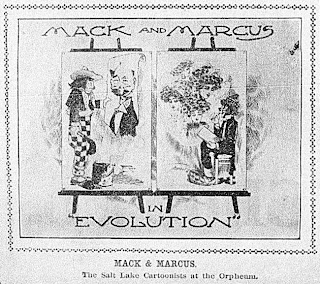 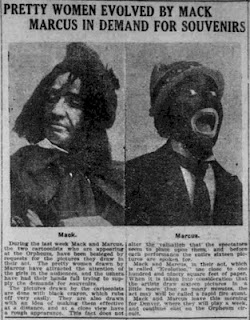 …Mr. McNamara will be remembered by Salt Lake fans as an extremely clever illustrator of sport pages and as an entertainer of rare ability. Under the stage name of "Mack," Mr. MacNamara joined forces with Meyer [sic] Marcus, a clever Philadelphia illustrator, and the two toured the Orpheum circuit last season as headliners. Their lightning drawing act made a hit everywhere they appeared. Last year Mark and Marcus went abroad and showed for forty weeks in the British isles and on the continent. Within a short time Mr. MacNamara will close his European engagement at the Theatre Majestique in Paris and will return to Salt Lake. Welcome to our fair city, Thomas Aloysius.

After his return to Salt Lake City, McNamara moved to New York City. In October 1910 he and Bud Fisher performed together at Hammerstein's Victoria Theatre in New York City. The Salt Lake Telegram gave this account on October 29.

…Bud Fisher, to whom "Mutt" and "Jeff" owe their fame, has taken the couple into Hammerstein's New York theatre, and with the assistance of Tom Mack, a former St. Louis cartoonist, draws just one series of the two with "Mutt" chasing "Jeff" in the usual style and "Mutt" down and out at the finish, with a bucket of paint over his head. A second series brings "Mutt" to the altar. As a finish Fisher and Mack appear to be picking their subjects from the audience, drawing grotesque figures which brings light laughter….Mr. Mack is quite as important in the specialty as Fisher, assisting in the drawing and adding speed to the arrangement.

McNamara's comic strip Us Boys was published from 1910 to 1928; a strip published on April 3, 1918, in the Washington Times (D.C.), mentioned the Mack and Marcus Cafe. Teddy, Jack and Mary ran from May 19, 1929 to August 24, 1930. A strip titled The Sandlot League is also frequently cited, though its existence has so far resisted verification by Alex or Allan.

McNamara signed his World War I draft card, on September 12, 1918, as Thomas Joseph McNamara. Did he change his middle name because of cartoonist Thomas Aloysius Dorgan, aka TAD? He lived with his wife, Bertha, at 423 West 120 Street, Apartment 37, in Manhattan, New York City. He was a cartoonist with the International Feature Service. He was described as medium height and build with blue eyes and brown hair.

In the 1920 census, McNamara was at the same address as above but his wife was not listed. A year later he moved to Hollywood. He lived alone in Los Angeles, California at 1737 North Whitley Avenue, as recorded in the 1930 census. His occupation was cartoonist for a newspaper. In the book, Artists in California, it said, "The years 1921-54 were spent in Hollywood as a writer and director for the 'Our Gang' series and director of Mary Pickford in 'Little Annie Rooney.' " Actually, McNamara returned to New York City in the mid-1930s. (A timeline of McNamara's career can be viewed at the Lucky Corner website.)

McNamara signed his World War II draft card on April 25, 1942. He resided in New York City at the St. Paul Hotel, 44 West 60th Street. He gave his occupation as "free lance artist and writer." He was described as "5 foot 7, 160 with blue eyes and gray hair." During his time in New York City he wrote and drew stories for several comic book publishers. Many of his credits can be found at the Grand Comics Database. A sample of his comic book work can be found at Lambiek Comiclopedia.

The date of McNamara's return to California is not known. In the book, The Funnies, Ron Goulart wrote, "More than twenty years later [mid-1950s] McNamara was down on his luck and living in a Tenderloin hotel in San Francisco. [Cartoonist Tack] Knight, comfortably retired, was also living in the city and he and McNamara became friends." The book, Artists in California, 1786-1940, said, "Nearly blind, McNamara spent his last ten years in San Francisco at the Laguna Honda Hospital." McNamara passed away on May 19, 1964, in San Francisco. The Independent (Long Beach, California) reported his death on May 20.

Tom McNamara, who made a fortune as a cartoonist, movie director, gold miner and all-around adventurer, died Tuesday at a public home for the elderly. He was 78.

McNamara, creator of the "Us Boys" and "Our Gang" comic strips, had been living on a small pension since 1955.

Once the bosom companion of Damon Runyon, Charlie Chaplin and Rube Goldberg, McNamara got his start cartooning on the San Francisco Chronicle before the 1906 earthquake.

He later joined a vaudeville team and toured Europe, playing at a command performance for England's King Edward VII.

In 1911 he returned to New York City and created two strips that made him famous.

In 1921 he joined the Hal Roach movie studios where he directed Mary Pickford in "Little Annie Rooney."

During the 1930s and '40s McNamara free-lanced as a writer and cartoonist. He once admitted that his free-spending habits resulted in virtual bankruptcy but added that "it was worth it."

Before his rise to fame he often prospected for gold in the mountains of California and Nevada.

He was born in San Francisco in 1886. He was a widower with no children and no close relatives.

Comments:
Hello, Allan-The LONG BEACH INDEPENDENT Had a few things mixed up. MacNamara joined the film industry in 1920, doing dialogue titles for Paramount. In 1922 and '23, he was given director credit on seven of the earliest "OUR GANG" shorts. He went on to co-writing and additional dialoge credits on several more films, specializing in children's roles, such as in SPARROWS (UA 26) and LITTLE ORPHAN ANNIE (RKO 32). His last film work was a 1933 entry in RKO's unsuccessful Tom Keane western series. He recieved directing credit on only one more film, LITTLE ANNIE ROONEY (UA 25).

Hello - The only notable non-kid film work that I can find for McNamara is his work on the BEAUTY PARLOR SERIES comedies produced and released by Film Booking Offices in 1927-28, and starring Al Cooke, Kit Guard, Lorraine Eason, Thelma Hill and Danny O'Shea. He adapted the films from stories by H.C. Witwer. Frank Flood