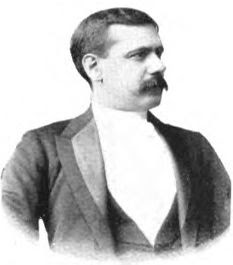 One of the most brilliant of the newspaper cartoonists of Chicago, Mr. Charles Lederer's sketches in the Herald, have been a strong attraction in that handsome sheet for a period of over six years. Mr. Lederer was born in Lowell, Massachusetts, thirty-four years ago. Lederer père was an artist of repute, and imparted to the son that artistic temperament and appreciation notable in the best artists. At the age of fourteen the subject of our sketch was apprenticed to George D. Hammar, a wood engraver, then located at 208 Broadway, New York, the site of the Evening Post building, but a year's application was sufficient—he struck, and took a studio room jointly with Henry Lovie, one of the most prominent artists in the illustrated weekly line in New York; and his first work was in drawing comic valentines for Fisher & Dennison.

His genius developed early, for while a mere boy from fifteen to twenty years old, he did very good piecework for Harper's, Leslie's, Graphic, Hearth and Home, Irish World, Christian at Work, and other publications. At an early age he showed a marked talent for caricature. He was ambitious, and this led him to dabble in the publishing business, at which, according to his own accounts, he was "invariably unsuccessful," although at one time, when only eighteen years old, he was doing a business of $75,000 a year.

In 1877 Mr. Lederer appeared in Chicago, and again tried his hand at publishing an illustrated weekly, at which he struggled with varying success for six months. Then he designed for book publishers, illustrated stories, made occasional cartoons, and for two years helped the National Printing Company paint the bill posters' board red. In 1883 he began making pictures for the daily papers of Chicago, working first on one and then another. Nearly every paper in town had a chance at him, but did not appear to know how to make the most of his talents. When he joined the Herald he found himself in his element. He was not repressed, but was given full latitude and encouraged to higher flights. Apart from the management of James W. Scott, and the editorship of Horatio W. Seymour, it is said that no man has done more than Mr. Lederer to advance the Chicago Herald to its present position. His work at first was solely on the Sunday edition, which he succeeded in popularizing to an unprecedented degree, and as a consequence his services were demanded on the paper every day in the week.

Mr. Lederer is one of the few men who can write entertainingly as well as draw, and the articles published in the Herald over his signature have attracted much attention, and been widely copied. He is a member of the Press Club, and of several other clubs in Chicago. He is unmarried, and one of the most popular young men in the city, his personal friends being numbered by the hundreds.

In his work Mr. Lederer is prolific and versatile. He makes pictures of all sorts, sad, satirical, humorous and attractive. He is quick to perceive the strong points in an article for illustrative purposes. Let a proofsheet be given him, and in an incredibly short time he will find the wit, and with a rapidity truly admirable will fill in a graphic situation to illume and emphasize it. His work is characterized by a vigor and a boldness with a delicacy of touch peculiar to himself.

It has been said that a man is a genius who can take the suggestions of others and make more of them than the originators ever dreamed, and who can, with equal facility, suggest ideas to others, not in words, but with a few quick strokes of a pencil. Lederer is this sort of a genius. He is great when he works with a proofsheet, he is greater when he makes pictures for an article to be written to.

[Charles Lederer was born in Lowell, Massachusetts on December 31, 1856, according to Who's Who in America 1910-1911 and The Book of Chicagoans 1911. In the 1860 U.S. Federal Census, he was the youngest of two children born to Jacob and Bettina; his father was a designer. The family lived in Lowell. in 1870 he and his parents resided in Brooklyn, New York; he was in school. The Book of Chicagoans said he was a "cartoonist and illustrator since 1875 for Frank Leslie's, Harper's, New York World, [and] New York Herald…." He has not been found in the 1880 census.

The 1900 census recorded Lederer in Chicago, Illinois at 514 North Avenue. His stepmother and a servant lived with him. His occupation was artist. The Book of Chicagoans said he was a "cartoonist and illustrator…for…[the] Chicago Herald and Record-Herald, [and] Chronicle"…and later "married Bertha Adele Mitchell, of Chihuahua, Colo., Sept. 29, 1907". They spent some time in Europe. According to a New York passenger list, they returned from Genoa, Italy to New York City on December 5, 1907. For a brief time, he and his wife performed together; a brochure for their performance, Fun with Chalk, can be viewed at the Iowa Digital Library. In 1910 the couple lived in Chicago at 1115 East 61st Street; his wife was 26 years old. He was an artist in newspapers of his "own account". He has not been found in the 1920 census. The Catalog of Copyright Entries, Part 1, Group 1, Books, March 1920 has an entry for him:
Lederer, Charles, 1856-
The Lederer art course; a complete, simplified system of drawing, design, cartooning and color work, by Charles Lederer. New York, Independent corporation [1920] 34 pt. illus., plates. 23cm.
© Mar. 31, 1920: 2c. and aff. Apr. 8, 1920; A 565500; Sam S. Gerstle, Chattanooga. (20-6655) 1476

The art course was advertised in periodicals such as Popular Science Monthly and Everybody's Magazine. The Chicago Daily Tribune reported Lederer's passing on December 14, 1925; a snippet from the article, "Charles Lederer veteran newspaper cartoonist dies in county hospital at age of 70". If anyone has access to ProQuest, please help us with details of his death.]

Comments:
Hello, Alex, and all---From the CHICAGO TRIBUNE, Dec.14, 1925: Charles Lederer was attacked by Bright's Disease, and was initially hospitalized in Racine, Wis., from there he was moved to the Cook County Hospital in Chicago on Dec. 7. He died there on Dec. 13. "So far as his friends know, he left no relatives". A meeting of newpapermen was scheduled to raise funds for his funeral.

After stumbling across an illustrated book by Lederer recently (called "Queertown"), I was searching for more info on him and his works and came across your site -- thanks very much for posting this bio! I was wondering if you would have any idea on possible resources for finding more of his work. For someone who sounds incredibly prolific, he's hard to find samples of, particularly of his newspaper cartooning... A couple instructional books and one or two broadsides are in some public institutions, but that seems to be it. ("Queertown", incidentally, was a book of illustrated humorous verse that seemed geared towards kids -- a lot of punnery, a lot of nonsensical creatures -- but also had a couple of gentle jokes at authority figures and the like that seemed to be meant a bit more for adults.)

Anyway, thanks again for this post, and any ideas would be greatly appreciated!

There is a misspelling of the man's name to whom Lederer was apprenticed. The wood engraver was George Dunton Hammar, who had served as captain in the 28th Pennsylvania Infantry in the early days of the Civil War. After the war, Hammar moved to Cranford, New Jersey, and commuted to his place of business in Manhattan. After some few years, he returned to Philadelphia to practice his trade, where he died on March 30, 1918.

I discovered in an attic of an old home in Chattanooga original cartoon/caricature drawings and watercolors by Charles Lederer. I am trying to find someone who might be able to give me some indication of value. I have not found much information except for this post.

I stumbled across your site after Googling the Lederer Art Course. My father (b. 1909 and now deceased)sent away for the Lederer correspondence art course, and they were still around the house when I was born, 45 years later. They served as an early inspiration and training which has served me well for a lifetime. Thank you, Emily in Seattle