(Part three in the five-part series of profiles on cartoonists and their connection to Bud Fisher. Billy Liverpool was identified by the late Bill Blackbeard as one of the artists who drew Mutt and Jeff. And you know what, he was right. --Alex)

Billy Liverpool was the pseudonym Myer Marcus used when he produced the comic strip, Asthma Simpson, the Village Queen. On November 25, the New York Times reported Marcus's death, and credited him with Asthma Simpson, which appeared locally in The Evening Sun. The most convincing evidence supporting the Times, was found in the Catalogue of Copyright Entries, Part 4: Works of Art…, 1915, New Series, Volume 10, No. 2, on page 228, first column. 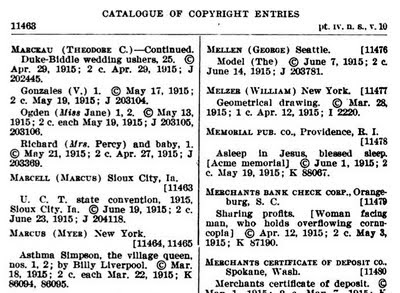 Marcus copyrighted Asthma Simpson which included the byline, "by Billy Liverpool." Why did he choose this name? When he and Tom McNamara, as Mack and Marcus, toured England they may have performed in Liverpool or used it as a port of call or both, so that may be the connection. Or maybe he adopted the name because met or knew someone with that name. (In the U.S. census records, there were several people named William Liverpool but not a cartoonist among them.) Later, Asthma Simpson Sundays, from October 15 to December 19, 1915, were copyrighted by the Newspaper Feature Service as recorded in the Catalogue of Copyright Entries Part 4: Works of Art…, 1915, New Series, Volume 10, No. 4, pages 542 to 543. How Marcus and the syndicate resolved the copyright ownership is not known.

A number of artists have been named as ghosts on Bud Fisher's Mutt and Jeff, including the pseudonymous Liverpool. I believe Marcus was indeed a Fisher ghost. Graphic evidence can be found in his final month on Excuse Me, found in the Jersey Journal (Jersey City, New Jersey). In December 1913, Marcus's drawing style changed in some of the strips, which were undated and published out of order. A strip published on December 2 was typical of his style, but two strips published on December 3 and 23 are significantly different and include a Mutt-like character. I think this was Marcus's public audition to Fisher.

During December 1913 Marcus left the strip, which was continued by Joe Doyle. It's possible Marcus began ghosting Mutt and Jeff early in 1914. His name did not appear on any comics from 1914 to 1915. For two years he may have been an employee of Fisher.

While Marcus was working on Mutt and Jeff, Fisher and William R. Hearst's Star Company were in a dispute. It was explained in Decision of the Commissioner of Patents and of the United States Courts in Patent and Trade-mark and Copyright Cases 1917 on pages 2 and 3.

…In May, 1909, Fisher went to New York, and his cartoons of Mutt and Jeff began to appear in the New York American, a newspaper published by the Star Company, the petitioner herein. On August 8, 1910, Fisher made a five-year contract with the Star Company. In this contract, paragraph 4, appears a statement to the effect that Fisher is the originator of the series of comic strips "Mutt and Jeff." Fisher continued to furnish cartoons for the Star Company, which were printed in the American and in many other papers under the control of the International News Company, which is the syndicating agent of the Star Company, with the titles to the cartoons printed exactly as he had written them. On December 11, 1914, the title of the cartoon as it appeared in the American was changed after it had been written by Fisher. No change was made in the title of this cartoon as it appeared in other papers receiving it. Fisher protested against this change, and he and the officers of the Star Company being unable to agree upon the subject of the titles to his cartoons he refused to furnish any cartoons to the Star Company after January, 1915, and the last "Mutt and Jeff" cartoon appeared in the American on January 29, 1915. Fisher made a contract with the Wheeler Syndicate on December 7, 1914, to draw his comic strips or cartoons for it after the expiration of the contract of August 8, 1910….

It is shown that the words "Mutt and Jeff," "in collocation," as some of the witnesses express it, first appeared in the cartoon published November 20, 1909, as follows:

Mutt and Jeff do a little ticket scalping at the big game—by Bud Fisher.

The cartoon of December 11, 1914, contained the title "Mutt and Jeff" with a dash after the word "Jeff," which was followed by the words "The little fellow also knows some law and proves it." These cartoons appearing in the American from January 19 to 29, 1915, contained the caption or heading "Mutt and Jeff" only, although Fisher protested against the use of these titles as a violation of the contract with him….

Fisher had to decide whether Marcus should continue producing more strips or take a long vacation during litigation. Although that decision is not known, the fact that Marcus adopted a pseudonym suggests he worked on the side while producing new Mutt and Jeff material. Marcus considered his options. He may have heard Ed Mack had been hired by Star Company to produce Mutt and Jeff strips. Marcus realized he would be out of work if Fisher lost in court. I believe that Marcus took steps toward a future without Fisher. Born out of necessity, Marcus developed a couple of ideas and pitched them to Newspaper Feature Service. He obtained a copyright to a strip or panel called Brow Brothers (Hiram and Lowell) on November 7, 1914, as recorded in the Catalogue of Copyright Entries, Part 4, Works of Art, etc. 1914, New Series, Volume 9 Number 4, on page 523; Brow Brothers would remain on the shelf until 1916. The other idea was Asthma Simpson, the Village Queen, which was accepted by Newspaper Feature Service. The strip was published in the Evening Public Ledger (Philadelphia, Pennsylvania) beginning on December 28, 1914. (The strip can be viewed at Chronicling America.) Below are samples of Excuse Me and Asthma Simpson for comparison.

With the expiration of Star Company's on August 8, 1915, the Marcus-drawn Mutt and Jeff strips reappeared on August 9, 1915. If Marcus produced strips during all of 1915, his run could have ended in the summer or fall 1916. The apparent end of Asthma Simpson came on July 18, 1916 in the Daily Eastern Argus, but Marcus was still busy with the Brow Brothers; the start and end dates are not known at this time, but Newspaper Feature Service held the copyright to the strips as early as April 1, 1916, as recorded in the Catalogue of Copyright Entries, Part 1, Group 2: Pamphlets, Leaflets, Contributions, etc: 1916, New Series, Volume 13, Number 5. His Fuller Bunk strip followed in 1917. In 1920 he moved to The World, where he worked until until his death in November 1923.

Billy Liverpool's star shone brightly for a year-and-a-half and then he vanished. Described as obscure and mysterious, he was the brilliant creation of Marcus, a showman to the end. I believe Marcus's time on Mutt and Jeff covered most of 1914, at least five-and-a-half months of 1915, and possibly into the summer or fall 1916. The question of who came next may be answered in Ink-Slinger Profiles: Ed Mack; stay tuned!