(Part four in the five-part series of profiles on cartoonists and their connection to Bud Fisher. Ed Mack was a "Fisher-man" who drew six months worth of Mutt and Jeff strips which were never used. --Alex) 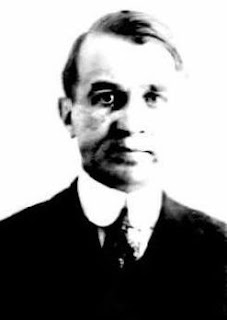 Edward Frank "Ed" Mack was born in Sibley, Illinois on August 28, 1881, according to his World War I draft card. Information on Mack's education and art training has not been found. There is an Ancestry.com family tree for Mack and his parents, John and Anna, who married in 1880. It was her second marriage; she had four children with Frank Hrdlicka, who died in 1877.

In the 1900 U.S. Federal Census Mack's family lived in Sibley; he was the oldest of two sons. The household included his half-brother and half-sister. His father was a painter, who died in 1904 according to the family tree.

In 1910 Mack lived with his half-brother, John Hrdlicka and his family, in Chicago, Illinois at 6551 Ingleside Avenue. Mack's occupation was cartoonist for a newspaper. He did Locating Mutt and Jeff for the New York American for a little over a week in 1910, a fill-in strip for Mutt and Jeff. For the Chicago Record-Herald he did the Adventures of Ziggy and Zim in 1912-13. The date of Mack's move to New York City is not known. Apparently he lived there by the time his strips, Hilda and Sime the Simp, were published starting in December 1913. He continued producing strips for Hearst through October 1916, and a panel that seems to have run into 1917, At the Movies also known as The Movies and Made in the Movies.

Mack definitely worked for Bud Fisher in 1918, but probably earlier. Fisher and Mack (see photo) applied for passports on March 25, 1918, to go to England. For the purpose of the visit Mack wrote on his application, "In line of my business as employee of Bud Fisher. Invitation of British Pictorial Service." On his application Fisher wrote, "Invitation of British Pictorial Service to accept position on staff of Lord Beaverbrook." On the back of the Mack's application, Bud Fisher identified him and said he knew him for "ten years." Mack returned the favor and identified Fisher. The passports were issued on March 28 and they departed. Four months later, Mack returned aboard the S.S. Lapland on July 30, 1918, as recorded on the passenger list. Fisher returned on October 19.

Who was drawing Mutt and Jeff during their absence? Was there four months of inventory to cover their absence? Were strips produced in England then shipped to New York? Had Fisher hired another artist to draw the strip in New York? The answers are unknown. Did Fisher and Mack really know each other in 1908? During that year Fisher was producing the strip Mr. A. Mutt for Hearst's San Francisco Examiner. If Fisher and Mack did cross paths, was it in Chicago, where Mack lived, or San Francisco? Maybe they stretched the date a bit.

Take a quick look back to see how Mack got involved with Mutt and Jeff. In May 1909 Fisher moved to New York and his strip continued in Hearst's New York American. Six years later Fisher accepted an offer from John Wheeler to move the strip to his syndicate. Meanwhile Hearst developed its version. Editor and Publisher published an interview, "Wheeler Recalls Mutt and Jeff's 60 Year Story", on November 11, 1967. Wheeler recalled,

…there was a lawsuit which made new law. The Hearst forces had planned to put out an imitation—drawn by an artist named Ed Mack—and had him preparing strips for several weeks before Fisher's departure. The court ruled the trademark and copyright were the property of the artist. Incidentally, in later years Fisher hired Ed Mack as an assistant.

So Mack started drawing Mutt and Jeff in 1914. How much material he produced was answered in the Bookseller, Newsdealer and Stationer article, "The Mutt and Jeff Pictures", published on September 15, 1915:

…The Hearst Company asked for an injunction to prevent Fisher from using the word "Mutt and Jeff," claiming a trade-mark. Fisher sought an injunction to prevent Mutt and Jeff being drawn by anyone else. The Star Company admitted that it had had cartoons of Mutt and Jeff drawn by another cartoonist, enough for six months' service in anticipation of Fisher's withdrawal. Supreme Court Justice Weeks granted both injunctions temporarily. He decided that Fisher could not be prevented from drawing figures, but delayed decision on the use of the three words "Mutt and Jeff" in conjunction….

Myer Marcus had been employed by Fisher to draw Mutt and Jeff. He started in 1914 and his run was interrupted in January 1915. Presumably he continued to produce new material, during the litigation, to the end of the year. His strips resumed in August 1915. If he had produced material through all of 1915, then his run could have ended in the summer or fall 1916. It is not known exactly how long he worked for Fisher. Mid- or late 1916 may have been when Mack started on the strip; perhaps coinciding with his start on Mutt and Jeff, his strip, Living in Lonesomehurst, ended in late 1916.

Mack signed his World War I draft card on September 12, 1918, and gave his occupation as newspaper cartoonist at the Bud Fisher Films Corp. (The Internet Movie Database has a filmography that starts in 1913.) Mack and his wife, Edith, lived at 640 Riverside Drive in Manhattan. Bud Fisher also lived on Riverside Drive, according to passenger lists.

Mack was still at the same residence in 1930; he worked as a cartoonist for a magazine. Books and web sites say Mack passed away in or around 1932 but the source for that date has not been identified. In 1934 Mack was alive. The Official Gazette of the United States Patent Office, Volume 439, May 1, 1934, published the following entry on page 43:

It's not known what the invention was or if he received a patent. Lastly, the Ancestry.com family tree has the date of Mack's passing as December 25, 1935.

Comments:
This is a great series! I own an original drawing for a 1922 Mutt and Jeff, and I've been trying to figure out, fruitlessly, who drew the damn thing.

Of course, it doesn't help that Fisher was such a notorious credit-hog. The fact that he liked to claim that he drew all the frames of the animated cartoons makes it unlikely that a single strip drawing can be securely attributed.

Keep up the good work!