(Part two in the five-part series of profiles on cartoonists and their connection to Bud Fisher. A select group of men worked on Fisher's Mutt and Jeff comic strip; I call them the "Fisher-men". Myer Marcus's connection is revealed at the end of his profile. --Alex)

Myer Marcus was born in Philadelphia, Pennsylvania on November 14, 1887; the birthdate is from his World War I draft card. In the 1900 U.S. Federal Census, Marcus was the first of two sons born to Abraham and Esther. They lived in Philadelphia at 1517 Park Avenue. Nothing is known about Marcus's art training. A New York Times obituary said his cartooning career began at the Philadelphia Inquirer, and some of his strips were: Percy Vere (1905-06); Doubting Thomas (1906-07); Acrobatic Trix of Hix and Nix (1907); and Sheer-luck Homes (1907).

Marcus ventured to the West where he met another cartoonist, Tom McNamara; they formed a vaudeville team, Mack and Marcus. Their act was described in the Salt Lake Evening Telegram (Utah) on November 21, 1908. 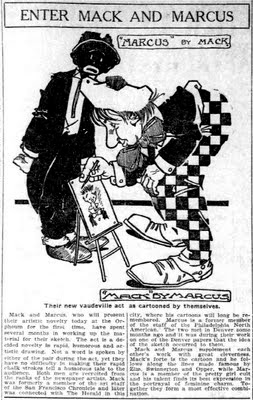 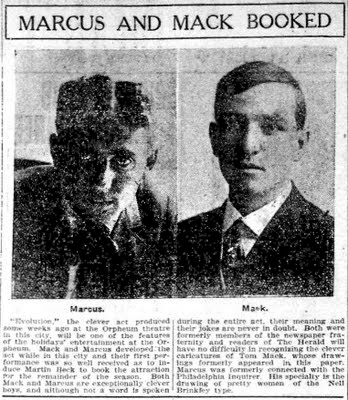 Though hampered somewhat by the lack of proper stage equipment, the team of cartoonists, Mack and Marcus made a distinct success at the tryout at the Orpheum yesterday. They responded to the hearty applause with an encore number. "Mack" is T.A. Macnamara, for some time cartoonist on a local paper, having come here from San Francisco. "Marcus" occupied a similar position on the Philadelphia North American. The two met in Denver recently and worked out the idea to which they gave form yesterday at the Orpheum.

One of the ideals of vaudeville they have successfully attained—that is, they keep something doing all the time. The interest of the audience is not allowed to lag an instant. That requires speedy and accurate work, but they proved themselves equal to the task.

The curtain rises on Mack, in the garb of a Latin quarter artist, discovered lying asleep along a garden wall, the panels of which subsequently prove to be paper. The artist starts in to draw simple objects such as a mitten, an egg, or a fancy drink—cherry and all. Along comes Marcus, as the negro minstrel, and with a few deft touches the mitten "evolutes" into a "mutton head"; the egg into an "old hen" of the kind that deals in neighborhood scandal. The fancy drink is as if by magic turned into a fancy drunk, and the Irish shamrock becomes a loyal member of the Salt Lake police force. The stunt is entitled "Evolution."

As a finale, the two work together on one paper, producing a beautiful woman's figure, which they entitled "Miss Salt Lake."

For an encore the artists started at either end of the wall and told the story of a man and a woman who got acquainted and finally married. Pictures in each pair are concluded at the same identical moment, Marcus being especially fine with the woman's figure. The climax of the little story in crayon is a pair of noisy twins.

The turn took well yesterday, and is well up to the high standard required for Orpheum attractions. 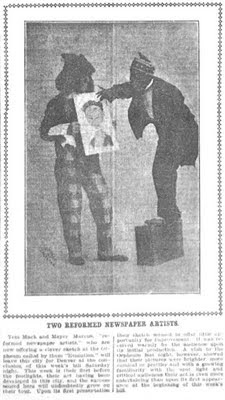 During one of the overseas tours, Marcus met his future wife. On March 20, 1911, the Philadelphia Inquirer gave this account of their meeting.

Philadelphian on Pier for Fiancee

One of the happiest passengers on board the Lapland, which arrived late today from Antwerp and Dover, was Miss Helene Van Den Broucke, of Brussels. The young woman crossed the Atlantic to become a bride. Her fiance met her on the pier. He is Myer Marcus, a young artist of Philadelphia. They met when he was rambling through Europe last year, making sketches here and there. Not long after they were introduced, Miss Van Den Broucke was wearing an engagement ring.

Mr. Marcus was called back to this country on important business. A correspondence followed in which Mr. Marcus timorously suggested that both would be happier if his fiancee could arrange to come to America. Her answer arrived much sooner than he expected. It was in the form of a cablegram announcing Miss Van Den Broucke would leave Antwerp on board the very next departing steamship. Her family provided a chaperone, and the girl and the chaperone said tonight that the journey had been exceedingly pleasant.

The marriage will take place tomorrow. It will be informal, with half a dozen relatives and friends there to congratulate the couple after the knot is tied. Mr. Marcus has a home ready in the German section of Philadelphia and the honeymoon will be spent there.

During the week of April 3, 1911, the Philadelphia Inquirer introduced three strips by Marcus: Excuse Me (April 3, 6 and 7, then daily starting on 10), Mrs. Make-Over (a one-shot, April 4) and Hector the Inspector (a one-shot, April 5). Excuse Me, which was undated, also appeared in the Jersey Journal (Jersey City, New Jersey); in December 1913 his run ended. The strip continued with Joe Doyle. Marcus obtained a copyright to comic strip or panel called Brow Brothers (Hiram and Lowell) on November 7, 1914, as recorded in the Catalogue of Copyright Entries, Part 4, Works of Art, Etc. 1914, New Series, Volume 9 Number 4. Two years later, Newspaper Feature Service held the copyright to it; presumably Marcus was the artist (Allan's note: the only record I have of Brow Brothers appearing was in 1919, from King Features, by a G.V. Dyer). In 1917 his strip, Fuller Bunk aka Fuller Bull, saw publication. Marcus signed his World War I Draft Registration Card on June 5, 1917. He was a cartoonist for the Newspaper Feature Service and lived at 622 West 141st Street in Manhattan. He was described as "5 ft 4, medium build with brown eyes and hair."

In 1920 the Marcus's lived in Hempstead, New York at 17 Woodview Road. They had a daughter, Louise, who was 11 years old and born in Belgium. On December 21, 1922, Marcus's wife and daughter returned, after nearly seven months, from Bermuda; her passport application stated she lived at 84 Grove Street in Manhattan.

Myer Marcus, director of the comic art department of The World, died of heart disease yesterday at his home on Woodview Road, West Hempstead, L.I., in his thirty-seventh [sic] year. He started as an artist on The Philadelphia Inquirer, but a gold prospecting venture led him westward and in 1908 he became cartoonist for a Denver paper. He tried vaudeville with success as a partner of Tom McNamara, touring this country and Europe. His comic strips of Asthma Simpsons [sic] appeared in The Evening Sun here. After several years with the Hearst publications he went to The World three years ago. Services will be held at his late residence at 2 o'clock Tuesday afternoon.

According to the Times, Marcus created Asthma Simpson, so, that means he was Billy Liverpool. This story will continue in Ink-Slinger Profiles: Billy Liverpool – stay tuned!