In a manner of speaking, whatever E. Simms Campbell is today, he owes to women. Not to a woman. To women.

These days, Simms is generally recognized as one of the greats of the cartoon and illustrating trade; his Cuties comic panels syndicated by King Features are a daily feature in newspapers throughout the nation.

But a decade or so ago, he was just another good artist—selling his share of drawings, raking in enough commissions to keep body and soul together, and getting a small share of recognition. Then he met Russell Patterson, the famous and fabulous cartoonist—and Patterson promptly took him to task.

"Look," the veteran artist told the young Negro from St. Louis, "you're a good cartoonist—but you draw everything under the sun…men, women, cats, dogs, landscapes...everything. Why don't you specialize, my boy? You might stick to women. If there's one thing I've learned in this screwy business over the years, it's that you can always sell a pretty girl."

Ever since that lesson from Patterson, it is doubtful if Simms has drawn ten cartoons that didn't include a pretty wench somewhere in the picture. And has it paid off? Well, today he lives on a lush four-acre estate in White Plains, N.Y., and has acquired an international reputation for his work in pen and ink and water color.

Campbell, one of the few Negroes ever to reach the top in this profession, was born in St. Louis on Jan. 2, 1906, son of Elmer and Elizabeth Simms Campbell. Both of his parents were schoolteachers; Campbell Sr., was assistant principal at Sumner High School in St. Louis and had been one of Howard University's great track and football stars.

His father died when Simms was four, and the boy was taken to Chicago by his mother, who wanted to finish her schooling at the University of Chicago. So Simms was schooled both in that city and St. Louis, being graduated from Englewood High School in Chicago and then spending a year at the U. of Chicago.

It was at Engelwood High, incidentally, that Simms became cartoonist for the weekly school paper—edited by nobody else than Seymour Berkson, now general manager of International News Service.

After a year of university life, Simms switched to the Chicago Art Institute, and on graduation went to work—as a waiter in a dining-car on the New York Central Railroad. 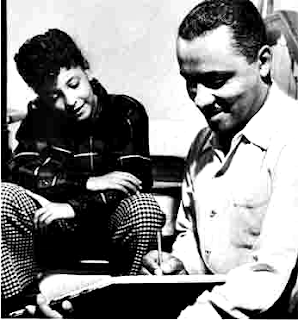 He finally hooked up with the Triad Studios, one of the midwest's largest advertising art agencies, and remained there for two years, until 1929, when he came to New York at the start of the celebrated depression. After month of pavement-pounding, he hooked on with the Munig Studios, a small advertising studio, went to the Academy of Design in his spare time—"I don't think any cartoonist can be really good unless he knows all the fundamental principals of art"—and began branching out as a magazine artist. The old Life, Judge, College Humor—most of the big slick-paper periodicals of that day soon were using his work. Simms lived with a maiden aunt, Miss Alice Simms, during these early days.

"I guess you might say I really got started in 1933, however," Simms says now. "That was when Esquire was starting. Dave Smart, the publisher, came to my apartment and asked me to contribute to the magazine—and in those first two years of Esquire's existence, I drew many cartoons a month and contributed heavily as a gagman…forty or fifty ideas monthly."

He came with KFS in 1939, and it was the late Joseph V. Connolly who dubbed his panel, Cuties. 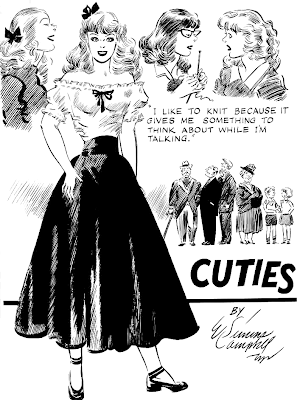 Proud of never having missed a deadline, Simms works from 9 or 10 a.m. daily until 11 p.m.—six days a week. It wasn't until four years ago that he stopped working Sundays. He is a perfectionist—and that trait keeps him glued at his drawing board until late into the night.

The original booklet in its entirety, can be seen here.

[In the 1910 U.S. Federal Census, Campbell and his mother lived with her father, two sisters and a female boarder in St. Louis, Missouri at 3307 Arsenal Street. His name was recorded as "Elmer C. Campbell." In the 1920 census they lived next door at 3309; his name was recorded as "Elmer S. Campbell." After his time in Chicago, Campbell was recorded, in the 1930 census, in St. Louis at 4223 Enright Avenue, Apartment 401. He lived with his maternal grandfather and a boarder. According to African Americans in the Visual Arts (2003), "he moved in with an aunt in the Harlem section of New York City in 1932. He studied at the Art Students League, where his mentor was German-born artist and caricaturist George Grosz." One of his strips for the Amsterdam News was Did you Know. African Americans in the Visual Arts said, "When Playboy…began publication in the early 1950s, Campbell drew cartoons for it too. His work also appeared in such leading magazines as The New Yorker, The Saturday Evening Post, Redbook, and Cosmopolitan. During his most productive years he turned out as many as 500 cartoons and other pieces of art a year….In the mid-1950s, tired of racial prejudice he experienced in the United States, Campbell and his wife moved to the tiny village of Neerach, Switzerland. 'Out here in this little off-the-wall village we don't have to prove nothin' to nobody,' he said in a 1966 interview. Campbell remained in Switzerland until his wife's death in October 1970. Then he returned to the United States…" Campbell passed away on January 27, 1971 in White Plains, New York. His death was reported in the New York Times on the 29th.]

Comments:
Thanks for these posts. Cartoonists of colour are so often the invisible men of the business. Much appreciated.