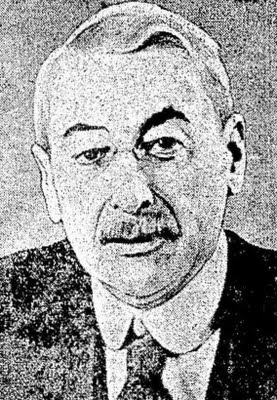 Walter McDougall and His Artistic and Literary Labors.

New York, Nov. 23,—Pictures in the daily papers are of comparatively recent date, but they have been used for a time so long that Mr. Walter McDougall, the cartoonist of the New York World, who joined the staff of that paper a few weeks after this phase of journalism had been inaugurated—and The World it will be remembered was the pioneer in this new department—finds himself today older in service than any other man in Mr. Pulitzer's employ. The effort to print pictures in daily papers did not promise well in the start, and the portraits of the men and women, when the names of the individuals were added, were absolutely libelous.

Mr. Pulitzer was determined to do something novel with The World, and he persisted in the illustrations, bad though they were. One day a young man sent up by the elevator boy a cartoon of Mr. Blaine, who was then running for the presidency. In a few days the cartoon appeared and the young artist called to see how much he was to be paid for the work. When the elevator boy heard his name he took him at once to Mr. Pulitzer, who there and then engaged him to work for The World on a liberal salary. This was Walter McDougall, who has since explained that the cartoon had been rejected by Puck and Life, and he left it at The World office because he did not know what else to do with it. It appears that The World printed the cartoon just as the young artist had made it, without any reduction, and the bold lines proved to be just what was needed, so that there should be a clear impression printed in the paper.

Since then there have been vast improvements made in the art of printing illustrations, but to Mr. McDougall belongs the distinction of having drawn the first cartoon which appeared in The World clear in its lines and not besmirched with ink in the printing. Since then Mr. McDougall has worked steadily on The World, and every reader of that paper is familiar with his name and work. He was the first man to make what might be called view illustrations, that is pictures of occurrences of one day to be printed in next day's paper.

Perhaps, however, Mr. McDougall is known to a wider public than even The World reaches as the illustrator of Bill Nye's letters, which week by week for many years have provoked the laughter of a continent. When I met Mr. McDougall recently I asked him how he managed to always hit off Nye with exactly the same smile. He said that he made a sketch of Nye when he first met him, and while listening to a case in court which they were reporting together, and that Nye as he appeared then had become fixed in his memory and he could draw him now without thinking of what he was doing. Even while he talked Mr. McDougall had drawn a head of the gentle humorist on the back of an old envelope and the picture was as natural as life.

"By the way," said McDougall, "I once drew a head like this on an envelope, inclosed a letter in the envelope and dropped it in the New York post office. The next day it was delivered to Mr. Nye at his home on Staten Island, there having been added in the post office in red ink, 'Try New Brighton, Staten Island.' " This shows how well known Mr. Nye has become as depicted by McDougall's pencil.

Previous to Mr. McDougall's employment on The World he had made pictures and written for the comic weeklies, and also for more serious publications. He had been also an engraver and designer, and had been the artist of a survey of the Colorado canyons. He is not content to let his work in drawing cartoons absorb all of his time, and he frequently does work of a greater finish and of a more ambitious nature. For awhile he contributed most of the sketches for a very nice illustrated paper, The Suburban, of which he was part owner and which was published in his native town, Newark, where he still lives.

Mr. McDougall is proud of the work he did for The Suburban, but he is very sorry that he was a part owner of that now defunct weekly. Only quite recently Mr. McDougall has appeared as an aspirant for serious literary laurels, and in a novel, "The Hidden City," published by the Cassells, he throws down the gauntlet boldly and bravely. The idea of his story is new and bold, for he tells of life in a city of the stone age, placed in the world during what might be called its electrical periodic. This is not done in the humorous way in which Mark Twain took his Connecticut Yankee inventor to the court of King Arthur, but it is told with all seriousness and gravity.

Mr. McDougall has just passed thirty-five, but he is one of those blond men with pink and white complexion who will always look younger than he is. This does not mean that he is at all effeminate. That is not the case by any means, for he is essentially a manly man. His manner is quick and responsive; his smile is easily provoked and his eyes twinkle at all the funny things to be seen in this all too sad and serious world. 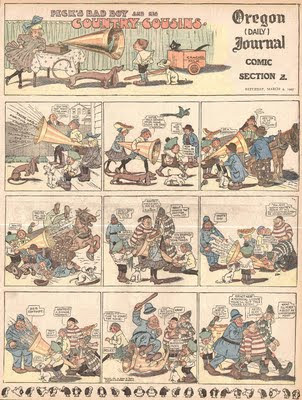 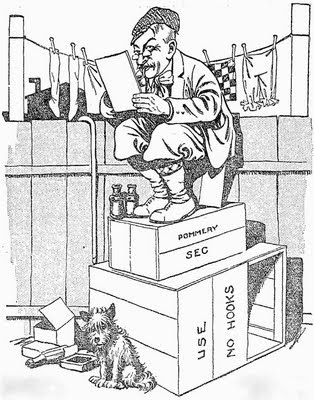 In the 1900 census McDougall was a newspaper artist boarding in Manhattan, New York City at 2420 7th Avenue. The head of the household was Alice Graham. Who's Who said his address in 1901 was 1131 S. 46th St., Philadelphia. The Artists Year Book (1905) said his office was at The North American, Philadelphia, Pennsylvania, and home in Atlantic City, New Jersey. Two of his strips, this decade, were Peck's Bad Boy and his Country Cousins and Mister Makepeace.

Ten years later McDougall was married and had a son in Montclair, New Jersey at 106 Claremont Avenue. Not only was he was counted in 1910 federal census, but also in the Pennsylvania state census; the head of the Philadelphia household was Alice Graeme. Hmmm. By 1920 he was a widower and lived alone in Middletown, New York at 10 Union Street.

McDougall's autobiography, This Is the Life, was published by Alfred A. Knopf in 1926. The Syracuse Herald (New York) published "Funniest Memories of a Famous Cartoonist", a full-page of anecdotes from the book, on August 22, 1926; included were a self-portrait (above right) and photo of McDougall (top).

His life came to a tragic end, by suicide. He was last seen alive on March 4, 1938 and found dead at his home in Waterford, Connecticut, two days later. The Washington Post obituary can be read here.]