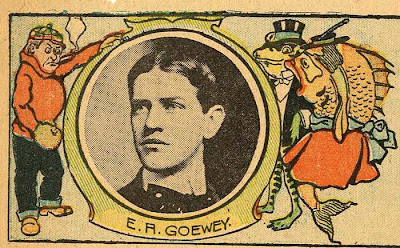 Edwin A. "Ed" Goewey was born in Albany, New York in July 1871. Goewey's father was a resident of Albany when he received his patent for an improvement to a tea kettle design, as recorded in Commissioner of Patents Annual Report, 1864; also, he was listed in the Albany Directory 1875. The date of birth is from the 1900 U.S. Federal Census.

In the 1880 census, Goewey was the oldest of three children born to J. Augustus and Mary. They lived in Albany at 142 Swan Street. His father was a jeweler. The first time Goewey's name appeared in the Albany Directory was 1887; he was an editor. The listing was the same the following two years.

The 1900 census recorded Goewey in Brooklyn, New York at 257 Prospect Place. He had been married to Harriet for six years. His occupation was newspaper writer and artist. In 1904 he produced the comics series Fish Stories and Handy Andy, the Man of Good Intentions, and worked on Joco and Jack. He also contributed to Cousin Bill from the City in the second half of the decade. 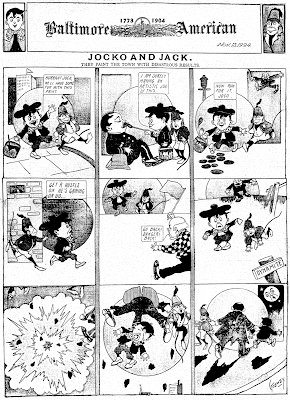 Edwin A. Goewey, who for the past five years has been connected with the Leslie-Judge Company, first as art manager of Judge and later holding a similar post as well as that of sporting editor with Leslie's Weekly, will soon leave for the West to join the forces of the Kansas City (Mo.) Post. On the latter publication Mr. Goewey will have charge of the dramatic desk, acting both as critic and dramatic cartoonist. His series of caricatures of stage folk that has been running in Leslie's Weekly for some two years will be continued as a feature on the Post. Mr. Goewey was with the World for some years as a writer and artist, and later conducted newspaper art departments in St. Louis.

His father passed away on July 25, 1917 according to the Hartwick Village Cemetery website. Goewey has not been found in the 1920 census.

Ten years later Goewey and Gertrude lived in Queens, New York at 162-33 Yuma Lane (later renamed 86th Avenue). His occupation was a writer for magazines. The census said Gertrude was 25 years old at the time of her first marriage, presumably to Goewey, which would have been around 1905.

Comments:
I've just spent an hour trying to track down that quote from the Dramatic Mirror. The paper didn't go to press on the 6th, only on the 2nd and the 9th.

I know this is an older post, but is there any chance you have any notes or anything on this? I've gone through both issues and can't find it anywhere...

You're correct. I made the error of writing 6 instead of 16. The article was published November 16 and is on page 10, at the bottom of column 3.

The Union had some strips in 1903... artists I don't know...copyright TCMcClure.

Only recently discovered Goewey, and that through his writing. He seemed no average illustrator, one can only wonder where he would have gone if he had lived until the golden age of comics. But, if you want to read his short fiction, one of his stories has been reprinted Gwandanaland Comics facsimile reprint of the January 1927 issue of Ghost Stories.