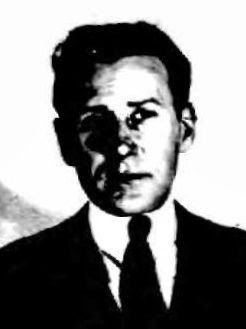 Edward "Ed" Grinham was born in London, England on August 19, 1883, according to a passport application filed on January 15, 1920. The family emigrated to the United States in December 1889. In the 1900 U.S. Federal Census, the Grinham family of six resided in St. Louis, Missouri at 2620 Laclede Avenue. Grinham, an artist, was the third of four sons born to James and Harriet. His father was a laborer for the railroad. The Cleveland Plain Dealer (Ohio) published the following article on December 24, 1908.


George McManus, the artist who created the Newlyweds, Panhandle Pete, the Jolly, Jolly Girls and many other comics for the past four years, was married tonight to Miss Florence Bergere, the original Mrs. Newlywed. The ceremony was performed at the Hotel Belleclaire by Rev. Arthur C. McMillan, rector of the First Presbyterian church of Yonkers.


Those present were Mr. and Mrs. Edward Grinham of St. Louis, Ray Peck, the author and his wife, and W. K. Semple of the Circle theater.


Mr. McManus being shy and bashful, had been keeping his coming marriage a secret. He had planned to be married at the city hall by Mayor McClellan but when he learned that the secret was out he decided to wed at once. 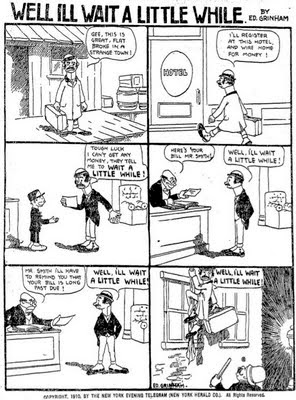 
In 1910 Grinham and his younger brother, George, lived with their parents in St. Louis at 5005 Ridge Avenue. He was a newspaper cartoonist, and his brother was a newspaper artist. The New York Evening Telegram published Grinham's Well, I'll Wait a Little While in 1910 and I Should Say Not in 1911. The Elkhart Daily Review (Indiana) reported Grinham's visit on July 7, 1911.


Edward Grinham, press representative with the Miller 101 Ranch show, is a cartoonist by profession, and as such was engaged for a number of years with leading publications of the east. His health failed, outdoor life was advised, the present engagement offered itself, and Mr. Grinham finds himself attached to the breeziest "outenest" outdoor occupation he could have hoped fortune would throw his way. The Review herewith presents a specimen of Mr. Grinham's work. 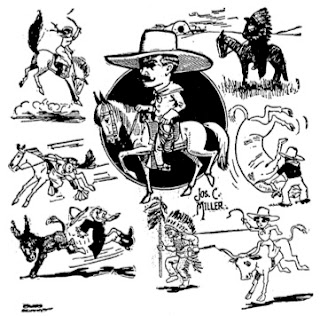 Who's Who in Animated Cartoons (2006) said, "…in 1915…Edward Grinham…animated for newspaper maverick William Randolph Hearst's International Film Service." The book Before Mickey: The Animated Film, 1898-1928 (1993) said, "…George McManus was unquestionably the most influential source of family material. His successful strip "Bringing Up Father" was made into cartoons at I.F.S. in 1916-17 by Edward Grinham, who was hired especially for the job and was supervised by Frank Moser and Bert Green." Grinham signed his World War I draft card on September 12, 1918. He was a cartoonist for the Air [illegible] Corporation, which was based in Muscle Shoals, Alabama. He lived with his wife at 2011 Morris Avenue in the Bronx, New York. His description was medium height and build with gray eyes and brown hair.


He was not recorded in the 1920 census because he was out of the country. His passport application showed he (see photo) was an artist and salesman, and was traveling for professional work to England and France. He departed on January 24, 1920. He returned to New York, aboard the S.S. New York, on April 22, 1920, from Cherbourg, France. The passenger list showed that he was a widower, and resided at the Long Ash [sic: Longacre] Hotel in New York City.


In 1930 Grinham and his second wife, Florence, lived in Teaneck, New Jersey at 1165 Anna Street. The census showed that he was 27 years old (1910 or 1911) at his first marriage. His occupation was business manager for a photo-engraving company.


The New York Times covered the funeral of Ogden M. Reid on January 8, 1947, and mentioned Grinham.


Leaders in the political, financial and business life of the nation and many figures of social prominence were among the more than 1,500 persons who attended a funeral service yesterday in St. Thomas Episcopal Church, Fifth Avenue and Fifty-third Street, for Ogden Mills Reid. Mr. Reid, editor of The Herald Tribune and president of the Herald Tribune Corporation, died on Friday night at the Harkness Pavilion of the Columbian-Presbyterian Medical Center at the age of 64….


The date of Grinham's passing is not known.

Comments:
You can see another picture of him on http://beckerexhibits.wustl.edu/mini/washu-docs-1903.html That page describes a 1903 book of caricatures by seven illustrators, including the very young Grinham and McManus (both about 20 years old!)