Frederick "Fred" Morgan was born in England in February 1865, according to the 1900 U.S. Federal Census; his birth year differs in later censuses. He has not been found in the 1880 census. So far, the earliest mention of Morgan, in the Philadelphia Inquirer, was on August 31, 1889; an advertisement for James S. Earle & Sons, an art dealer, listed a piece, "School Belles," by Morgan. In the Inquirer column, "Everybody's Column," of May 21, 1904, there was an answer to Miss E.G.G.'s question about Morgan: "His name is Fred Morgan and he resides in this city. His father was an artist of renown in Great Britain…." There was a London artist Frederick Morgan (1846-1927), who might be his father. A biography at Rehs Galleries said
...Fred Morgan married three times. His first wife was the genre and landscape artist Alice Havers (1850-1890) and together they had three children. Their eldest son became an artist and exhibited landscape and figure subjects regularly at the Royal Academy under the name Val Havers. With his second wife, he had two children, one of whom also became an artist....
I believe the child from the second marriage may be Morgan the editorial cartoonist. The date of Morgan's employment at the Inquirer is not known. The Inquirer of September 15, 1899 mentioned him.
…Several fine proofs had been pulled of the splendid portrait of Admiral Sampson which accompanies this paper and which was drawn from a very recent photograph by Rau, of Philadelphia, by Fred Morgan, of The Inquirer's art staff. The original pen-and-ink drawing was presented to the Admiral and then the famous officers attached their signatures to the proofs….
In the 1900 census he was boarding in Philadelphia, Pennsylvania at 931-933 Arch Street; his occupation was Inquirer artist. Also in the same building were an Inquirer editor and manager. The census said Morgan immigrated to the U.S. in 1875. The census also revealed that he married in the 1880s; his three children, Horace, Dorothy and Ruth, resided at the Five Points House of Industry, an orphanage, in New York City. The oldest, Horace, was born in New York in January 1890. The fate of Morgan's wife is not known.
Morgan was thoroughly entrenched in the newspaper artists community. The Inquirer, on October 23, 1902, reported the following:
Newspaper Artists' Exhibition
A special meeting of the Newspaper Artists' Association was held at 1430 South Penn square yesterday, when preliminary steps were taken for holding its second annual exhibition in December. The following executive committee was elected to serve until the end of the present year: F.V. Wilson, Charles Bell, W.M.F. Magraw, John Sloan, Herman Rountree, Arthur Crichton, Jean Mohr, Walt McDougall, William Hofacker, F.R. Gruger, Fred Morgan, V. Floyd Campbell, Henry Gage and Mrs. Benson Kennedy. The manager of the last exhibition, C.W. Parker, was appointed to take charge of the coming show. 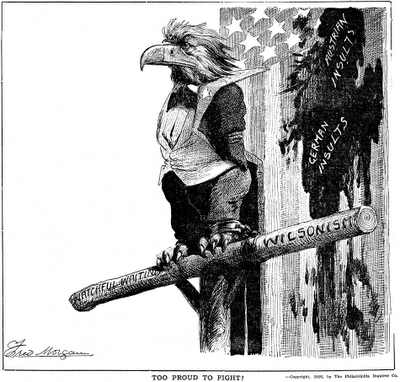 In the 1910 census, Morgan was reunited with two of his children, Horace and Dorothy. They lived in Philadelphia at 3331 Gratz Street. His occupation was newspaper artist, and his age was given as 48, which made his birth around 1862. The Inquirer published an advertisement in its July 14, 1918 issue, highlighting its coverage of the war. Near the bottom of the ad was a box about its comics and cartoonists.
FRED MORGAN, the leading cartoonist of the United States, not only draws cartoons on the war, but he also deals with national and State political issues and important events of every kind throughout the world. 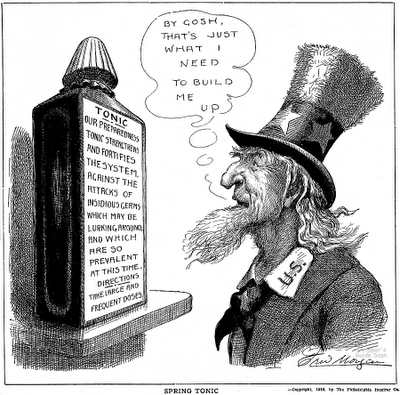 Alone, Morgan remained at the same address in 1920. He was a newspaper cartoonist. His age was listed as 58. In the Inquirer's "Everybody's Column", of May 26, 1921, was this item:
Size of Original Cartoons
Editor Everybody's Column:—Would you please print in your wonderful column how large is the original cartoon which appears every day on the editorial page? Do these cartoons have to be drawn a certain size to fit 2 columns, 3 columns, 4 columns, etc? Hoping to see this in your column soon. Y.T.
A one-half reduction is the general rule. Our friend Fred Morgan, however, had long made it a practice to draw his cartoons about three times larger than the cut they are intended for, with a view, no doubt, to preserve the fine lines for which his work is noted.
Next time you pass by 1109 Market st., have a look at the original exhibited every morning in the Inquirer's window.
Morgan's youngest daughter lived with him at the same address in the 1930 census, which recorded her as Florence (Rawlinson), her middle name. She was divorced. According to the census, Morgan was 70 years old, which made his birth year 1860. And the census recorded his age as 27, at the time of his first marriage. Further information about him has not been found. I believe the Inquirer published his obituary, but it has not been found.

On a more positive note, he seems to have worked at the Inquirer at least as early as 1898 (http://msmcdushistory2.pbworks.com/w/page/21881743/American-Imperialism-Political-Cartoon-Activity)

That's a very good point about the birth year, 1846, of Fred the painter, who would have been about 19 when Fred the illustrator was born, if that date is accurate. Without a birth certificate or baptismal document we really don't know how accurate the census info was. It's true Fred the painter did not immigrate to the U.S., but, for the sake of argument, his second wife could have immigrated on her own and brought her children with her; maybe she had relatives in America. A passenger list, if it exists, with her and the children's names would clear that up.

Fred the illustrator may have been 10 years old when he arrived in America in 1875, according to the 1900 census. Again, we don't know how accurate that date was. About twenty-five years had passed when he was asked about his year of immigration. My experience with census information is that inconsistencies and errors abound.

I concede that the reference to the painting "School Belles" was probably the work of Fred the painter.

Looking back at the first paragraph, there is this line about Fred the illustrator's father, "His father was an artist of renown in Great Britain." Here are two lines from Fred the painter's biography at Rehs Galleries website, "Frederick Morgan was born in London, England in 1847. His father John Morgan (1823-1886) was a genre artist who received his training in Paris France under the French painter and teacher Thomas Couture (1815-1879)." Fred the painter and John Morgan are the two most prominent Morgans in the art field, of that time, that I am aware of. If Fred the illustrator was not the son of Fred the painter, could he have been the son of John Morgan, who would have been around 42 years old at the time of Fred's birth. Another question would be, "Who was the mother?" Of course, this is speculation, but it might explain why Fred the illustrator was sent to America.

Who were the parents of Fred the illustrator remains unclear.

On a more positive note, the first editorial cartoon by Morgan appears to have been published on July 21, 1898 in the Philadelphia Inquirer; on the day before, there was an unsigned cartoon that resembles Morgan's work.

Ok I am the Great Granddaughter of Frederick Sommerville Morgan 1865-1932. He was born May 22 1862 in London. I was told from my Mother and grandmother that Fred's father was Matthew Somerville Morgan 27 April 1839 London - 2 June 1890 New York City was an artist known mainly for his cartoons in various publications.
I can not verify this as family records were Lost. I was told Fred came to USA some times between 1885 and 1890. His wifes name is no where to be found Yet. ( I am still looking for that) Fred's wife that he did have 3 children with were Horace, Ruth Florence, Dorothy, Died not long after giving Birth To Dorothy. Fred not having anyone here to help him with the Children put them into a home for children untill he could care for them. No records could be found on them so far. The Fred Morgan (1847) you talk about was an Uncle to our family. As for him Leaving England, My Mother was told that he was doing policial cartoons on the Royal Family and was told to leave England. I do know that My Fred Morgan Got Married around 1889 before coming here to stay in USA. Fred's Children Dorothy lived a quiet Life in Phila Untill 1960 and then moved to Cape May NJ where she passed in 1980. Ruth Florence Did not live with her father as she was married in england to a J Rawlinson from London. She divorced Him and went back to school to become a Nurse working with Mental Handicapped people in Phila.Until she passed away. Horace I have no infomation on him as no one ever spoke of him, I found him on the 1900 census In House of Industry. I am trying to locate the records for the House of Industry, as if someone was sick and got off a boat from another country they were sent to this place to live, Parents were seperated from the Children, untill a family could prove that they made enough money to support their family. My mom or Grandmother never had a drawings that Fred did. But I know that they were In England in 1893-1894 as I have a oicture of my Aunt from England Photographer. I hoppe this helps with some of the confusion..

Matthew Sommerville Morgan was Fred Morgans son. Matthew died in 1890 in New York City NY. Fred came to the US when his father asked him to help out with his work. His first trip here was in 1885 to help with Collier's. He would come here for a month do his job and go back to England. As, His Mother died he went back to help his brothers and sisters out. Fred Married Elizabeth Brotherton 1888 in England and their first child was born 1889. Fred never did get his naturalized citizenship here. Fred died in 1932 in Philadelphia PA.

If anyone is still out there, I am the great grand daughterof Fred Morgan. I have the Morgan family box, with pictures drawings newspapers and documents. If anyone is interested in pursuing the information on him, you may contact me.

I would like to contact JMorganGGD. I am a descendant of Fred Morgan also (the great-grandson of Fred Morgan's daughter Dorothy). This is first time I've used blogger so I don't how contacts can be made. Feel free to email me at gmedwards8758@gmail.com