Virginia Clark Hudzietz was born Virginia Clark on December 22, 1899, according to the Social Security Death Index. (The year 1900 is the birthdate that appears in books and most web sites.) A Dallas, Texas native, she was the youngest of three children born to William and Sarah, as recorded in the 1900 U.S. Federal Census. They lived in Dallas at 211 Park Street. Her father was a civil engineer.
In 1910 the family of six was counted twice in the census. Their Dallas address was 161 Lear Street, and their Jackson, Texas home was on Stewart Street. Her mother's name was recorded as Sadie and her father worked for the railroad. During this decade, it appears her father passed away.
Hudzietz, her mother, youngest brother, older sister and her husband lived in Dallas at 1412 Sanger Avenue, according to the 1920 census. In A Century of Women Cartoonists (1993), Trina Robbins wrote, "…she married her childhood sweetheart, Coon Williams Hudzietz, and moved to Chicago, where she attended the Art Institute. The name Hudzietz was pronounced Huget, so in 1926, when the artist sold her first strip, Gentlemen Prefer Blondes, to the Bell syndicate, it was natural that she signed it not with a suspiciously 'foreign' name that was difficult to pronounce, but with the glamorous 'French-sounding' Huget." The short-lived Gentlemen Prefer Blondes strip was followed by several strips including Babs in Society (1927), Merry Mary (1927), Miss Aladdin (1929), and Double Dora (1929).
The 1930 census recorded the Hudzietz family of three in New York City at 1046 Madison Avenue. She was a commercial artist and her husband was a mechanical engineer. Their 16-month old daughter was born in Texas. The Catalog of Copyright Entries, Third Series Volume 13, Part 1 Number 2, Books and Pamphlets etc., July-December 1959 listed the following book:
Abingdon, Alexander, pseud., comp. Prize boners for 1932. Illustrated by Virginia Huget. (Boners: fourth series) © 4Mar32; A49048. Viking Press, Inc. (PWH); 3Aug59; R240685.
In the mid-1930s she illustrated stories of fiction which were distributed by the Bell Syndicate. 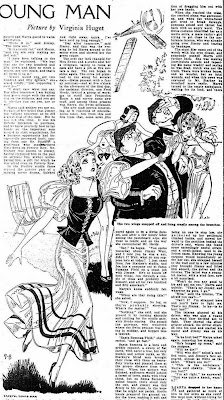 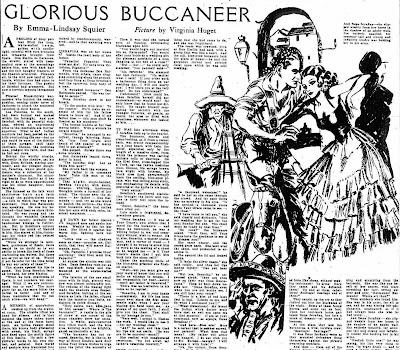 "Glorious Buccaneer", Evening Recorder (Amsterdam, NY) 8/11/1934
Lamibek Comiclopedia, said, "During the 1930s, as fashions changed, so did Huget's style. She took over the popular strip Skippy from Percy Crosby (under his name), and in 1944 she carried on the strip Oh Diana!, originally by Don Flowers, under her maiden name Virginia Clark." Her mother passed away in 1948. The May 5, 1948 Dallas Morning News (Texas) named the survivors and said Hudzietz lived in Great Neck, New York.
According to the Social Security Death Index, her husband passed away in August 1968 in Rye, New York; she passed away on June 27, 1991 in South Carolina.