James Angel "Jim" Navoni was born in Napa, California on November 18, 1887, according to the California Death Index at Ancestry.com. In the 1900 U.S. Federal Census, he was the oldest of four children born to Bert and Mary, both Italian emigrants. The family lived in Napa where his father was a farmer. In Artists in California, 1786-1940, Edan Hughes said, "While in San Francisco in 1907-11, Navoni studied at the Institute of Art." Navoni attended the University of California, Berkeley in 1908; his name was found in the yearbook The Blue and Gold. According to The Call (San Francisco, California), he was a contributor to the school paper, Pelican, as reported on September 25, 1909.
In the 1910 census, the Navoni family lived in Napa on Berryessa Road. The September 15, 1910 edition of The Call reported the following:

Staff of University Funny Book Chosen
Berkeley, Sept. 14.—Editor G.J. Adams of the Pelican, the comic paper of the students, has announced his staff for the publication, which on Friday will make its first appearance for the term replete with cartoons and satires. Adams will be assisted by H.E. Mills and James Navoni as associate editors….

Navoni found work at the The Call; he was one of several artists to work on the local strip Alonzo. The paper promoted its children's section, The Junior Call, with a party, as reported on April 11, 1912. 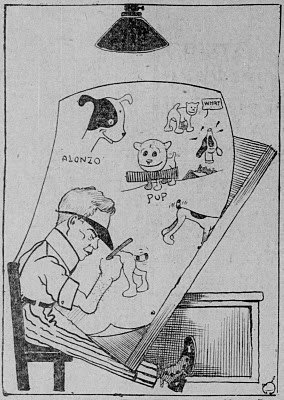 The Call, 4/11/1912.
Alonzo and Pup to Appear at the Junior Call's Party
...Artist Jim Navoni, who draws Alonzo and the Pup and their funny doings in The Junior Call every Saturday, will be there with large sheets of paper and plenty of charcoal pencils. And between Mrs. Olsen's great stories Artist Navoni will make motions on the paper with his charcoal, and lo! there will be Alonzo and the Pup smiling at the youthful audience.
It will be worth a whole lot just to see Navoni make the two famous dogs come to life before your eyes. After the audience has seen him do it, all the boys and girls will able to draw Alonzo and the Pup—maybe!... 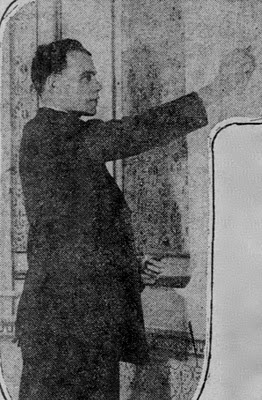 The Call, 4/14/1912.
Three days later The Call said:
…there were two interesting features, one being the piano solo by Stefan Vucosavlievich, the boy pianist. The other was furnished by James Navoni, the clever Junior Call artist, whose pictures of Alonzo and The Pup are known from one end of the juvenile San Francisco to the other. Navoni, in the interests of Alonzo and his small brother, who unfortunately were unable to attend in person, presented their regrets and drew their smiling faces on an improvised board, much to the delight of the assembled audience….

Navoni Heard From
James Navoni, formerly of the San Francisco Call, has for several months been in the employ of a travelogue concern, and has been zigzagging here and there across the country.
"During my travels," he writes, "it has been my good fortune to come into contact with people of all types and classes. You can't deny that Mr. Knock-about-a-bit is quite a valuable teacher. At any rate, he has helped me toward a better understanding of human nature, the cartoonist's greatest assets." 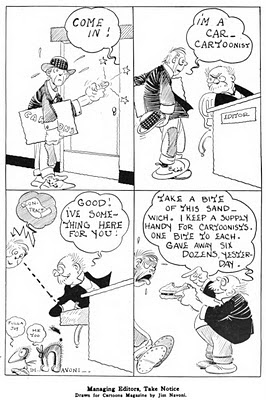 Cartoons Magazine, May 1916.
He signed his World War I draft card on May 29, 1917. He resided in Napa and his occupation was cartoonist. The description of him was tall height, medium build with brown eyes and hair. The date of his move to Chicago, Illinois is not known.
The 1920 census recorded Navoni, a lodger, in Chicago at 61 Delaware Place. His occupation was cartoonist. A cartoon of his was published in The Judge. He is credited with Charley the Chump and Looney Land (1926 Wheeler-Nicholson dailies) [Allan's note: Charley the Chump has not yet been found appearing in any newspaper; Looney Land has, but just barely, with a little over a week's worth printed in Lowell Sun].
Navoni returned to his roots. In the 1930 census the cartoonist lived with his parents in Napa at Rural Route 3. Eventually he gave up cartooning and opened a tavern. The Oakland Tribune reported this incident on September 27, 1939:
Night Prowler Seized in Roof of Tavern
Strange sounds from the roof of a tavern at 2969 San Pablo Avenue aroused James Navoni, 2937 [sic] San Pablo Avenue, early today and soon led to the arrest of George Fava, 31, 3213 Filbert Street.
Police Sergeant J.J. Reichel said he found Fava on top of the tavern roof, with the skylight removed and a knotted length of rope stretching through it from the roof to the floor. Fava wore socks on his hands as gloves and admitted, the officer said, he had intended to rob the tavern.

Comments:
Thank you for this piece on Jim Navoni. I was happy to find it when doing a search. Jim Navoni is my great uncle, brother of my grandmother Johanna Navoni Lytjen. I am wondering if you have more information on his years in New York cartooning.