Ralph Oswald Yardley was born in Stockton, California on September 2, 1878, according to his World War I and II draft cards. In the 1880 U.S. Federal Census, he was the youngest of three children born to John and Caroline, both English emigrants. The family lived in Stockton on Sonora street. His father was a grocer. Who Was Who in American Art (1985) said he studied at the Mark Hopkins Institute of Art. The San Francisco Call, in its August 22, 1895 edition, reported the upcoming fall term of the Mark Hopkins Institute of Art. The article "Art in Studios Again" mentioned Yardley as one of the students.
In the 1900 census he lived in Honolulu, Hawaii on Punchbowl. His occupation was reporter. The newspaper Fourth Estate said, on January 28, 1922, "…Mr. Yardley started his career on the San Francisco Examiner, later going to the Chronicle. He was for two years staff artist of the Honolulu Advertiser, returning to the San Francisco Chronicle in 1902. Three years later he joined the staff of the New York Globe, returning to the coast to become manager of the art department of the San Francisco Call. For more than three years he did free lance magazine cover work in New York for Harper's, Leslie's and other national periodicals…." In 1903 the Crocker-Langley Directory listed him as an artist at the Bulletin and his residence at 791 Sutter Street. That same year the San Francisco Bulletin published his strip The Adventures of Ping and Pong.
The 1910 census recorded him in Manhattan, New York City at 115 East 34th Street. He was an artist. Yardley signed his World War I draft card on September 12, 1918. He lived in Stockton at 729 North Centre Street, and was a self-employed artist. His description was medium height and build with brown eyes and hair. The Fourth Estate said, "…During the war he became a part of the liberty loan organization for the twelfth federal reserve district with headquarters in San Francisco. In 1919 Mr. Yardley opened a commercial studio in San Francisco and supplied the Bulletin a cartoon daily for its editorial page until several weeks ago when he left to join the Stockton Record." 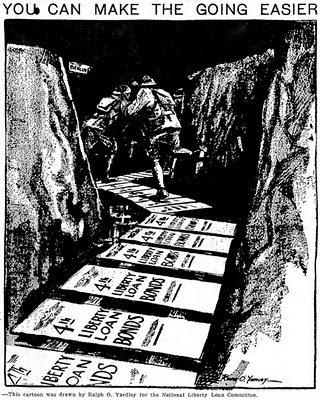 Seattle Daily Times 10/10/1918
His marriage was reported in the Oakland Tribune (California) on April 16, 1919:
Miss Carmen Glauch Bride of Cartoonist
San Francisco, April 16.—Miss Carmen Glauch of 2728 Golden Gate avenue, daughter of Herman Glauch, prominent literary worker, was married to Ralph Yardley, nationally known cartoonist and Liberty Loan artist, this morning by Rev. J.W. Lundy of the Howard Presbyterian church.
Yardley started his career as cartoonist on San Francisco newspapers. For two years he was on the art staff of the New York Globe. Recently he has been working with the publicity committee of the Victory Liberty Loan committee of the Twelfth Federal Reserve district, preparing art work for the present campaign.
Mr. and Mrs. Yardley left at noon for a short honeymoon, after which they will make their home in San Francisco.
In 1920 the couple lived in San Francisco at 689 Third Avenue. His occupation was artist in photography. On January 28, 1922, the Fourth Estate said, "Ralph O. Yardley, well known newspaper and magazine artist, has returned to Stockton, Cal., the city of his birth, to join the staff of the Stockton Record…." In 1923 he received a patent for a headlight lens. The November 1927 issue of The Focus reported this amusing incident.
Hiking Breeches Ideal Dark Room; Films Are Saved
Ralph O. Yardley, whose cartoons amuse readers of the Stockton Record is a resourceful photographer. Recently he went on a hike in the mountains with a friend and at the end of the first day realized he had not brought the slide for his Graflex magazine.
Various ideas were suggested as to the removal of the magazine without spoiling the film. All were rejected till Mr. Yardley exclaimed, ''I have it—those pants of yours are black and closely woven. Remove them and I'll use them for a dark room."
''Wouldn't my shirt do, and what's the matter with your pants?" asked his surprised companion.
"Your shirt is white and my pants are grey." And so—the improvised dark room saved the day. These are bare facts. The films were saved.
In the 1930 census the couple and their two daughters lived in Stockton at 2230 Crafton Way. He was a cartoonist for a daily paper. On April 27, 1942, Yardley signed his World War II draft card. He lived in San Joaquin, California at 999 North Lincoln. Editor & Publisher reported his retirement on July 26, 1952.
Ralph Yardley Retires After 57 Years
Stockton, Calif.—Cartoonist Ralph Yardley has retired from the Stockton Record after 57 years of newspaper work.
Mr. Yardley, now 73, was the Record's first cartoonist and has been on the staff for the past 30 years. Prior to his Record career, the artist drew for the San Fran­cisco Chronicle, San Francisco Examiner, San Francisco Call, San Francisco Bulletin, New York Globe and Honolulu Advertiser. His first job was with the Examiner.
Yardley passed away on December 6, 1961, in San Joaquin, according to the California Death Index at Ancestry.com.

I believe it was this feature that I saw in the 1960s being reprinted in the Stockton Record under the title "Bygones".

For a photo of the artist:
http://3.bp.blogspot.com/-lyKOvjAGVfo/TeyE3uWSdLI/AAAAAAAAXc8/ZaBAH5bdeRo/s1600/yardley_1987_stockton.jpg