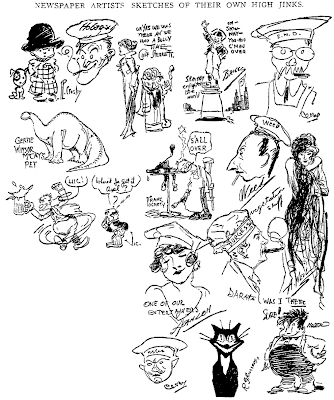 NEWSPAPER ARTISTS GAZE AT DINOSAUR WITHOUT A SHIVER
"High Jinks" at Beefsteak Aid Atmosphere Somewhat Jarred After Refreshments by Some of Winsor
McCay's Antediluvian Creations.
(New York Tribune, 2/23/14)
If Winsor McCay, the prominent vaudeville acrobat, hadn't announced at the newspaper illustrators' dinner yesterday morning that he was about to Introduce his latest freak, the dinosaurus, and if Arthur Hammerstein, the Broadway Adonis, hadn't walked in just at that moment, surrounded by perfume and ten little "High Jinks" girls, one illustrators' party would have gone down in history as having been held without police interference.

As it was, the sound of the applause reach the ears of the ever alert town constables, Luke Geeghan and Henry Rausch, who keep the peace o' nights in Columbus Circle, and they just had to lope over to Reisenweber's to find out what it was all about.

They were immediately placated, however, for Clive Weed, who is well known to the police, and Clare Briggs, who is rapidly becoming acquainted in the effete East, were determined that nothing should prevent the dinner from being what Mr. Hammerstein calls a "Chief Doover," and nothing did. The two officers got what they came for and departed some time after, chanting a song that Briggs picked up in the Latin Quarter of Chicago. Outside of a few minor details like the above and the fact that there was little white space in the dining room, the dinner was a huge success.

Everything that could be done was done. Beefsteak was strewn about the floor in neat mosaics; Mrs. "Bud" Fisher threw herself into the spirit of things and taught Arthur Hammerstein the "Artists' Amble"; "Hal" Coffman wrote his autograph on everybody's hat; little Miss Barnett defied her manager and said that she would dance with.any fellow she liked after working hours, and the waiters were well dressed.

When everybody had met everybody else, and when the "High Jinks" ladies had become used to the artistic atmosphere, some one—it couldn't have been a press agent—began showing moving pictures of Winsor McCay's latest creation. He, being a shy fellow, only prefaced the views with a speech of about an hour's length, but the pictures were good, even with that handicap. Even a moving picture critic from "The Mount Vernon Bee" admitted this fact. He said this, says he, not because he was a friend of Mr. Hammerstein, who is going to put them on in vaudeville, but because he couldn't witness an artistic piece of work and withhold due praise. After the artistic pictures there were some regular moving pictures, but nobody looked at them at all. Someone attacked the piano and some one else cleared the beefsteak from the floor, so that those who were awake could dance.


Thanks to Alex Jay for discovering this article!

Comments:
you ever get the feeling you were born too late to have gone to all the really good parties?

I'm surprised George McManus isn't represented, seeing as he's in the film and everything. Was the framing sequence (inspired by this event?) filmed later?