John Paul Arnot, Formerly of Reno,
Dies in S.F. After Long Career as Cartoonist
Nevada State Journal, 12/6/1951
John Paul Arnot, native of Markleeville, and former resident of Reno, died in San Francisco, recently after a long and successful career as a cartoonist, an funeral services were held in that city early this week.
Mr. Arnot's career as a cartoonist started soon after he left the University of Nevada in 1907, and during the intervening years it covered a wide variety of activities.
He was born at Markleeville, where his father, N.D. Arnot, was an attorney, and the family later moved to Placerville when the elder Mr. Arnot was named judge for that district. John Paul Arnot came to Reno to attend the University of Nevada, where two sisters and a brother already had graduated. Another brother, Percy A. Arnot, attended college in California, and is now a physician and obstetrician in San Francisco.
In his college days, Mr. Arnot's skill with pencil and pen were recognized. He and Silas E. Ross were chosen to publish the 1908 Artemisia, with Mr. Arnot making the cartoons and art work, and Mr. Ross writing most of the text and supervising the editorial work.

Started WIth Hearst
Mr. Arnot did not graduate from Nevada, but went to San Francisco where he became a cartoonist on the Hearst newspapers. Later he and some of his workers formed their own feature syndicate. In 1913 he worked for the San Francisco Chronicle as sports cartoonist, then returned to the Hearst organization by joining the King Features syndicate, working in the east for a number of years. He returned to the west coast in 1933 as sports cartoonist for the San Francisco News, and a year later became associated with Eastman Kodak Co. in San Francisco.
Surviving are his widow, Mrs. Hope Beach Arnot; a son, John Philip Arnot; two sisters, Mrs. May Arnot Rice, who graduated from the Nevada university in 1900, and now resides in Berkeley; Mrs. Laura Arnot Leavitt, member of the Nevada class of 1904, and now living in San Francisco where she operates a women's wear store; three brothers, Stanley L. Arnot of Sonora, Calif., Nathaniel D. Arnot and Dr. Percy Arnot of San Francisco. Another brother, the late Edwin P. Arnot, graduate of the University of Nevada in 1902, was a mining engineer.

[John Paul Arnot was born in Markleeville, California on September 16, 1887, according to his World War II draft card. In the 1900 U.S. Federal Census, he was the fourth of eight children born to Nathaniel and Anna. The family lived in Markleeville. His father was a superior court judge. In 1910 the family lived in Placerville, California on Nob Hill. Arnot was a miner. The Mountain Democrat (Placerville, California) reported Arnot's cartooning success on February 14, 1914.
Some Cartoonist.
John Paul Arnot, son of Judge and Mrs. N.D. Arnot, is making quite a reputation as a cartoonist on the San Francisco Chronicle, where he has been employed for some months past. In the issue of the journal of Sunday Feb. 8th, young Arnot presented a full front page with cartoons summing up in comic style various news features of the week, and it was certainly a cleverly worked out scheme of burlesque and pointed criticism. Placerville is proud of the young genius—who claims this as his "home town." 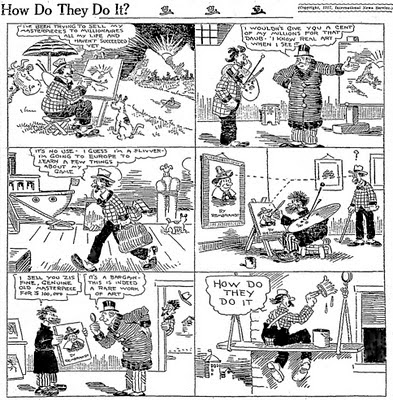 San Diego Evening Tribune 2/26/1917
In 1920 the couple lived in Placerville at 66 Mill Street. He was a cartoonist. In a couple of years they returned to New York City. Arnot produced Helpful Henry from 1925 to 1926. The 1930 census recorded them and their son in Manhattan at 220 Northern Avenue. Arnot's occupation was newspaper cartoonist. A few years later they made their home in San Francisco.
Arnot signed his World War II draft card on April 26, 1942. He lived in San Francisco at 385 Moncada Way. He was employed at the Eastman Kodak Company. His description was height and build, 5' 8.5", 190 pounds, with gray eyes and brown hair. Arnot passed away on December 1, 1951, in Agnew, California, according to the California, San Francisco Area Funeral Home Records, 1895-1985 at Ancestry.com. He and his wife were buried at Cypress Lawn Memorial Park in Colma, California.]