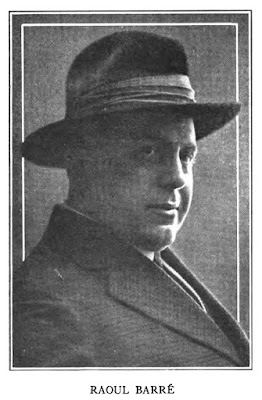 Vital Achille Raoul Barré was born in Montreal, Quebec, Canada on January 29, 1874, according to The World Encyclopedia of Cartoons (1999), Who's Who in Animated Cartoons (2006), Wikipedia, and Robert Edwards' biography at Find a Grave. Barre's life and career is thoroughly covered in these four sources. This profile will focus on just a few things.

Barre's only American strip was Noahzark Hotel. The strip has been titled incorrectly as Noah's Ark by many sources.

In the 1910 U.S. Federal Census, Barré, wife Antoinette, and daughter Marguerite lived in Manhattan, New York City at 609 West 127th Street. His occupation was illustrator. The census said he immigrated in 1903.


In 1913 Barré formed his own animation company, Raoul Barré Studio, according to the World Encyclopedia of Cartoons. However, in Felix: The Twisted Tale of the World's Most Famous Cat (1996), John Canemaker said the company name was, "…Raoul Barré's Animated Cartoons, Inc., in the Fordham section of the Bronx."

The Riverside Enterprise (California) published this item on May 18, 1915.


Barre, Edison Cartoonist
Edison is to release regularly, beginning with "The Animated Grouch Chaser," a series of animated comic cartoons by the noted French cartoonist, Raoul Barre. The cartoons will be considerably different, in several features, than some that have already appeared, as the pictures will combine both acting by the Edison players and the animated cartoons, both being interestingly and funnily blended. Mr. Barre will personally stage the part of the picture devoted to the players so that the infectious strain of fun will run consistently through the picture and work out his ideas perfectly. 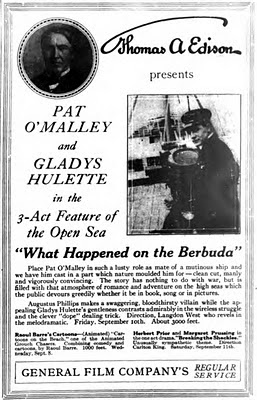 In 1918, Barré suffered major setbacks. Who's Who in Animated Cartoons said, "A year later, in early 1917, Fisher took control of the series, forming Bud Fisher Films Corporation and setting up a studio with Bowers in the Bronx, producing fifteen cartoons that year and gradually squeezing Barré out of the operation." Edwards said, "But there was friction between him, Bowers and Fisher, and Barré abruptly quit in 1918." World Encyclopedia of Cartoons said, "Personal and financial disputes between the partners led to Barre's withdrawal in in 1919." Wikipedia said, "Mutt and Jeff was a strong money-maker for Barré, Bowers, and Fisher, but Barré began to get tired of it all as the years passed, due to personality conflicts with both partners. Barré retired from animation in 1919, amid rumors of a nervous breakdown."


Barré's World War I draft card revealed that he was institutionalized at the Central Islip State Hospital in 1918. The date of his admission is not known. Below is the information on the card: 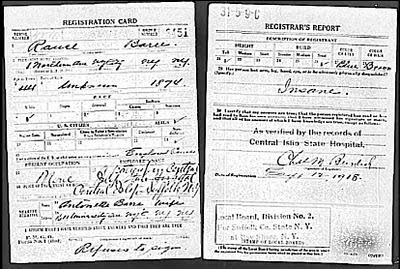 The date of his release from the hospital is not known. In the 1920 census, the family of three lived in Glen Cove, New York at 49 Sea Cliff Avenue. He was a newspaper cartoonist. Barré returned to animation in 1926 but ill-health forced him to leave and return to Montreal, where he passed away on May 21, 1932.

Comments:
Great Post! If you can find Izzy Klein's article on Charlie Bowers online it discusses in great detail Barre's retirement from Mutt and Jeff, which had very much to do with the decline of Barre's mental health and also with Bowers allegedly cheating Barre out of money, which later lead to Bowers being replaced by animator Dick Friel as studio head in 1920.