Calvin A. Fader was born in Massachusetts on September 18, 1905, according to the Social Security Death Index and the censuses. In the 1910 U.S. Federal Census he was the second of three children born to Alexander and Carrie. They lived in Somerville, Massachusetts at 19 Ash Avenue. His father was a window decorator in the millinery industry. The date of Fader's move to Washington, D.C. is not known.
In 1920 the Faders lived in Washington, D.C. at 1434 Perry Place. The United States Forest Service publication, Forest Service Bulletin, Volume 13, 1929, reported on a new strip.
American Tree and Its Uses
This is the title of an educational features "Strip" sponsored by the National Lumber Manufacturers Association. The sketches will be drawn by Calvin A. Fader who is now featuring "American History by Motor." The sketches will appear in the newspapers for a period of one year beginning next September.
Fifty-two "commercial" trees have been selected to be featured—one tree each week for one year. Each strip will contain five panels in which will be told how each tree serves mankind. For example: In the hickory tree strip Panel No. 1 will hold a drawing of the tree in the upper half; in the lower half a map of the United States, a shaded area showing where hickory trees are to be found. Panel No. 2, drawings of hickory leaves, buds, nuts, blossoms, and bark. A study of these pictures will enable one to identify a hickory tree in the forest. Panel 3 will feature some of the principle products of hickory wood—golf clubs, axe handles, wheel spokes, etc. In Panel No. 4 pictures and text will tell the annual cut of hickory; its value, etc. In Panel No. 5 will be pictured something that will forcibly center the mind of the reader on the subject.
Ten years later most of the Fader family remained at the same address. His occupation was newspaper artist. One of the strips he worked on, in the early 1930s, was George Washington's Travels. The Springfield Daily Republican (Massachusetts) reported his upcoming wedding on June 21, 1935.
Dorothy E. M'Cray Will Wed Tomorrow
Will Become Bride of Calvin A. Fader at Home of Her Parents
Among tomorrow's weddings will be that of Miss Dorothy Elizabeth McCray, daughter of Mr. and Mrs. Walter F. McCray of 223 White street, and Calvin A. Fader, son of Mr. and Mrs. Alexander G. Fader of Washington, D.C. The ceremony will take place at 11 at the McCray home and will be followed by a wedding breakfast.….
...Following a stay at Groton Long Point, Ct., the couple will make their home at Washington, D.C., where they will receive friends after July 15.
The bride-elect is a graduate of Classical high school and Mount Holyoke college. She has been a teacher at Norwich Free academy at Norwich, Ct. The groom is a graduate of the Meyer Beth College of Commercial Art at Chicago, and is a commercial artist….
The Editor: The Journal of Information for Literary Workers, 1936, published a listing for Parade of Youth, based at 1727 K Street, NW, in Washington, D.C., "Parade of Youth is a weekly newspaper for boys and girls appearing in daily and Sunday papers all over the country." Fader contributed illustrations for many of the serialized stories, such as, "A Man's Job" (December 5 and 12, 1937), and the panel, Now I Know. 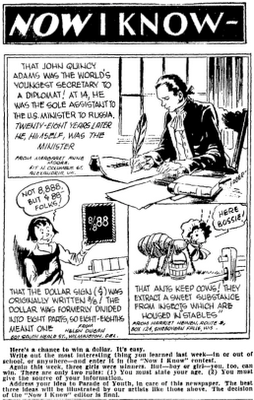 Parade of Youth, 2/23/1936
The Springfield Union and Republican (Massachusetts) published his Sunday strip, Doggy Dramas, beginning on March 20, 1938, on "The Boys and Girls Page".

Debut Strip, 3/20/1938
The Springfield Union reported his in-laws 64th wedding anniversary on July 6, 1963; a brief excerpt:
…They have one daughter, Mrs. Calvin A. Fader of Silver Springs, Md., and one grandson. Their son-in-law was formerly a commercial artist for The Union. Their grandson, a recent graduate of the University of Maryland, is doing research work for the government in Italy.
Fader passed away in September 1978 in Silver Spring, Maryland, according to the Social Security Death Index.