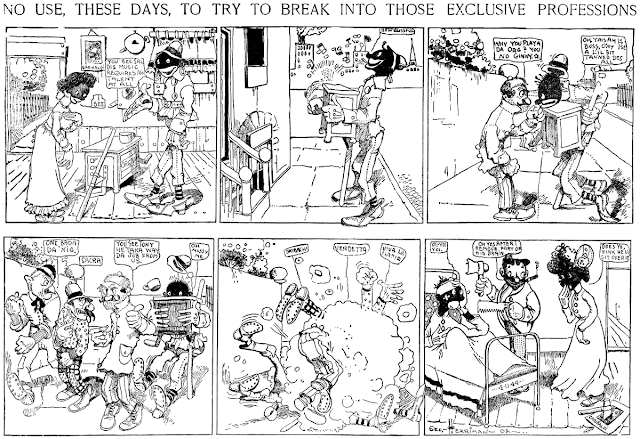 We take a break this week on Herriman Saturday from our regularly scheduled LA Examiner cartoons for this late-breaking news: Mark and Cole Johnson, whose prodigious memories are to be questioned only if one likes to eat crow, have sent me the above episode of Musical Mose.

You'll recall that we covered that strip as an obscurity about a month ago, and Mark shortly thereafter mentioned that he seemed to recall an episode running in the North American. I disagreed, saying that my indexing of that paper indicated no such occurrence. A week or so passed and brother Cole sends me this scan, which he assures me is from the March 9 1902 issue of the North American, my index notwithstanding. Presumably the comic section I indexed on microfilm was incomplete or I just plain missed it.

The remaining question, then, is whether this episode also ran in the New York World, or if it ran only in the North American. If it did run in the World, did it run on March 9? Or is it the one remaining episode of February 16 not printed with my earlier blog post? Sadly all these questions are, at least for the moment, unanswered.

The Feb 16 World episode of Musical Mose is "Musical Mose 'Impussanates' a Scotchman, With Sad Results." I never saw the "Exclusive Professions" episode in the World comic supplement during this period, though I have a vague memory that at least one Mose got picked up by some other paper. I really like the Garibaldi picture in the first and last panels of this one!

It would seem that Herriman was short a cartoon for the NA, and he had a Mose already drawn, so he sent that. He had deadline problems all the time, probably because of his health. Not too long ago I was asked to help decipher the handwriting on the margins of a Krazy Kat original. It turned out to be his editor questioning him about late work!
In any case, he got away with this switch. He isn't referred to as Mose, even though it's obvious it is. The transient nature of 1902 series strips meant nobody noticed.