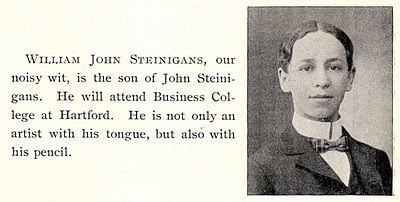 Our "Little Willie," or rather William John Steinigans is the sport of the class. In one sense he is always well informed as to the occurrences in the athletic world; on the other hand his sportive wit and grotesque actions causes much mirth and (trouble.) Willie, "Let not thy mirth turn to mischief," so goes the proverb. On one occasion Willie was asked why he did not recite. He replied "I hain't got no book." At other times he would often answer "Because."
In the 1900 census, he was the youngest of two children born to John and Emily, both German emigrants. They lived in Meriden, Connecticut at 880 Broad Street. His father was a knife maker. Steinigans birth date was "Feb 1879" and his occupation was "Type Writer". He was listed as a clerk in the Meriden, Connecticut, City Directory, 1901. The date of his move to New York City is not known. He was on the staff of the New York World which published his strip, The Dream That Made Bill a Better Boy, starting in August 1905. He and George McManus were instructors, in comic art, at the School of Practical Illustrating; an advertisement for its summer school appeared in International Studio, May 1907. 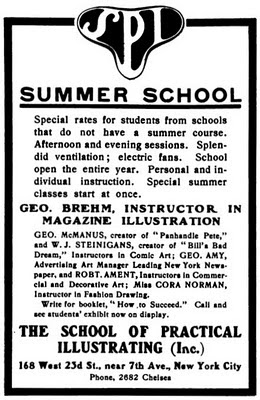 And he instructed at the National School of Art, 2228 Broadway, according to an advertisement in the New York Herald, January 12, 1908. He and Vet Anderson handled the evening comics and cartooning class.
In the 1910 census, he was recorded in Manhattan, New York City at 320 West 96 Street. He married Martha around June 1909 and was a newspaper artist. HIs strip Grimes's Goat ran in the World beginning November 1911. Around 1913, he moved west. In the book, This Way to the Big Show: The Life of Dexter Fellows (1936), Fellows recalled carousing with his cartoonist friends:
…[George] McManus, who boasted that they kept him on the World, his first New York paper, because Joseph Pulitzer, who was then blind, could not see his drawings; Tom Powers, whose cartoons and barblike quips will be remembered by thousands; Bill Steinigans, who drew dog pictures for the World; and I were the four horsemen of Park Row. We rode, for the most part, in search of drink, food, and pleasure and invariably found them all. The little group was broken up in more ways than one when doctors presented Steinie with an ultimatum which gave him a year to live in New York or three years in the West. Steinie elected to go to Banning, in Southern California. Although he lived for five years, it seems to me that he would have been much happier with a shorter stay on this earth spent in New York. In Banning and later in Tucson, Arizona, he was among strangers, people who were not his kind, with nothing to see but cacti and desert.

Steinigans also spent time in Palm Springs, about twenty-two miles southeast of Banning. The Riverside Enterprise (California) named him and others in its February 8, 1920 article, "Palm Springs Has Lure for Tourists".
…Lovely indeed is the Palm Springs of today—and yet this some pilgrim cannot but regret the passing of the picturesque, ramshackle little collection of huts and shacks beloved by the colony of former days, which included Edwin Salisbury Field; Mrs. Robert Louis Stevenson, wife of the famous author; Robert V. Carr, another writer; "Jimmie" Swinnerton, well known Hearst cartoonist; George Herriman, creator of "Dinny Dingbat" and "Krazy Kat"; William Steinigans, New York World comic man; and others noted for their creative talents.

Steinigans passed away January 25, 1918, in Los Angeles. Cartoons Magazine, in its March 1918 issue, gave a brief account of his life.

William J. Steinigans, comic artist on the staff of the Sunday World, died at Los Angeles, Cal., Friday, January 25.
Mr. Steinigans was a member of the World staff for about sixteen years, most of that time on the Sunday comic supplement. He was the creator of "The Bad Dream That Made Bill a Better Boy," "Splinters," "Mr. Hubby" and other comic series. He was famous particularly for his funny pictures of dogs, which figured in every series that he drew.
About five years ago, Mr. Steinigans went to California for his health, and with the exception of some time spent in Arizona, he remained there until the end. He is survived by a widow. 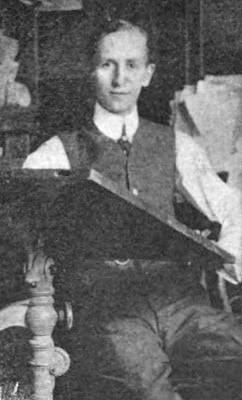 The Daily Citizen printed a series of legal notices, regarding Steinigans' will.

Notice of Hearing Petition
In the superior court of Pima county, state of Arizona.
In the matter of the estate of William J. Steinigans, deceased.
Notice is hereby given that Southern Arizona Bank and Trust company, a corporation, has filed in this court a certain document purporting to be the last will and testament of William J. Steinigans together with his petition praying that said document be admitted to probate in this court as the last will and testament of said William J. Steingans who, said petitioner alleges, is deceased, and that letters testamentary issue thereon to said petitioner, and that same be heard on Tuesday the 26th day of March, A.D., 1918, at 9:30 o'clock in the forenoon of said day, at the court room of said court, in the court house, in the city of Tucson, county of Pima, state of Arizona, and all persons interested in said estate are notified then and there to appear and show cause, if any they have, why the prayer of said petitioner shoal not be granted.
S.A. Elrod
Clerk.
By M.S. Brown, Deputy Clerk.
Dated March 14, 1918.
First pub, Mar. 15, 1918.
Last pub, Mar. 27, 1918.


According to the Connecticut, Deaths and Burials Index at Ancestry.com, Steinigans was born in 1879, and buried at the Walnut Grove Cemetery in Meriden, Connecticut. Steinigans was in Los Angeles when he died. The address of where he lived, at the time, is not known but there are two possibilities to consider. His wife was recorded in the Los Angeles City Directory, 1920 at "1321 N Serrano", and in the 1920 census at 1404 Serrano Avenue.