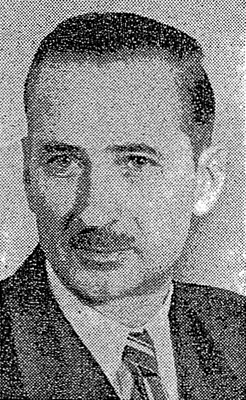 Edward D. Kuekes, an artist on this paper since 1922, yesterday was named Plain Dealer cartoonist by Editor Paul Bellamy, succeeding to the post left vacant by the death of Hal Donahey June 1.

Kuekes, known familiarly to his associates and countless admiring readers as "Ed." will not be facing a new task in concentrating his facile technique on editorial cartoons. On and off since 1926 he filled in for Donahey when the senior cartoonist was on vacation, away on trips or out because of ill health.
Kuekes' artistic leanings were first discovered when as a child he snipped a folded piece of paper with his mother's scissors and fashioned a bird and a horse. His parents encouraged the ability, and study at art school came later.
Drawing Like a Golfer
The new cartoonist holds to the theory that a drawing should be like a golfer—"the fewer the strokes the better."
Seldom one to ask friends for comment on his work, Kuekes feels acceptance is sound praise or unfounded criticism come from such requests.
Once, when Kuekes had placed a pastel he had done of a dog on the mantel in his home, the artist received the "sincerest form of flattery." His cocker spaniel bounced into the house, spotted the picture and barked.
After attending Baldwin-Wallace College, the cartoonist studied at the Cleveland School of Art and the Chicago Academy of Fine arts before coming to this paper.
Features Include "Kernel"
Plain Dealer features of the artist which have brought him acclaim over the years have included "The Kernel," one-column fixture of the comic page; "Closeups," movie page feature done with W. Ward Marsh; "Cartoonist Looks at the News," published on the Sunday editorial page; "Funny Fables," popular feature from 1933 to 1937 which was later published, and "Alice in Wonderland," a series done with Miss Olive Ray Scott, which was carried in 20 papers in the United States and several European publications before the war.
Interest in magic brought the birth of "The Kernel" in 1942. Kuekes first sketched the likable little rabbit as a trade-mark on the drawings sent from a magicians' convention he helped cover for the Plain Dealer in Kenton, O.
An ardent hobbyist, Kuekes is an mature orchid grower, is widely known for his skill in playing bells and is active in doing pastels and etchings in his remaining spare time.
The cartoonist, his wife, Clara, and two sons, Edward G. (Pat) and George C., both seniors at Baldwin-Wallace College, live at 112 East Center Street, Berea.

[Edward Daniel Kuekes (KEY-kess) was born in Pittsburgh, Pennsylvania on February 2, 1901, according to Current Biography Yearbook (1954). In the 1910 U.S. Federal Census, he was the third of four children born to Otto and Elizabeth, both German emigrants. They lived in Pittsburgh at 525 Jackson Street. His father was an employment office agent. The Encyclopedia of Cleveland History said, "…Kuekes moved with his family from his native Pittsburgh, Pa., to Berea [Ohio] in 1913. There he graduated from Berea High School before pursuing art studies at the Cleveland School of Art…and the Chicago Academy of Fine Art."
In 1920 the family lived in Middleburg, Ohio at 128 East Center Street. Kuekes was a salesman at a notion store. According to the Encyclopedia of Cleveland History, "In 1922 he married Clare Gray of Berea and began his career at the Plain Dealer as understudy for cartoonist James H. Donahey." He has not been found in the 1930 census.
He was awarded the Pulitzer Prize in 1953 (see photo) for the cartoon "Aftermath", published in the Plain Dealer on November 9, 1952. The cartoon can be viewed here. The original art is at the Library of Congress.
Current Biography Yearbook said, "Kuekes has hazel eyes and light brown hair. He stands five feet nine inches tall and weighs 148 pounds. His hobbies include raising orchids, taming wild ducks, doing pastels and etchings, and playing a set of twenty-five to thirty musical bells." In 1964 Kuekes gifted a collection of his cartoons to Syracuse University.
Kuekes passed away on January 13, 1987 (Social Security Death Index), in the Baptist Retirement Home in Oklahoma City, Oklahoma (Encyclopedia of Cleveland History).]

Comments:
This is very cool. Ed Kuekes was my great uncle. I knew some of this information but by no means all of it. Thank you for posting this!!!