Charles Davis Mitchell was born in Wilmington, Delaware on May 18, 1885, according to the Delaware Birth Records at Ancestry.com. Who Was Who in American Art (1985) has the same place and date. In the 1900 U.S. Federal Census, he was the oldest of three children born to Charles and Caroline. They lived in Camden, New Jersey at 401 North Second. His father was a contractor. Mitchell provided interior illustrations for the Saturday Evening Post as early as April 1907, and continuing into the mid-1920s. 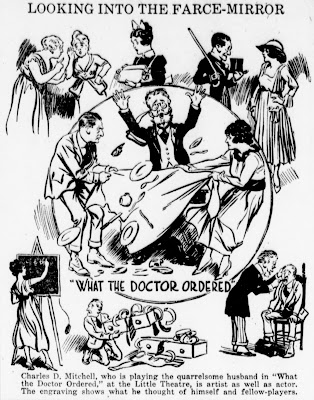 The Mitchell family was recorded in the 1910 census in Philadelphia, Pennsylvania at 5713 Thomas Avenue. He was a magazine illustrator. His other profession was actor. He drew himself and others in the play, What the Doctor Ordered, for the Public Ledger, February 27, 1917. 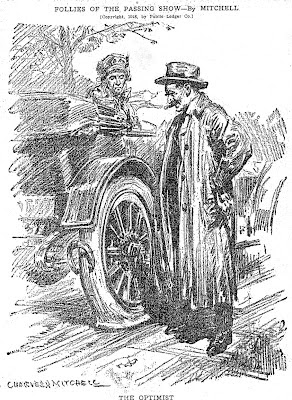 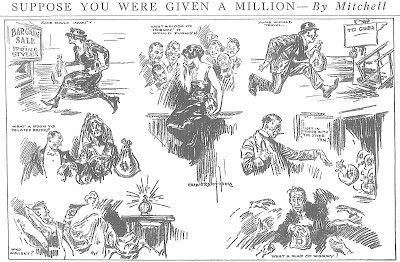 Brooklyn Daily Eagle (New York) 3/28/1920
The Public Ledger published his Follies of the Passing Show beginning in July 1917. His final Follies was published March 28, 1920. He signed his World War I draft card on September 12, 1918. He lived at 210 Rutgers Avenue in Swarthmore, Pennsylvania, and was a newspaper cartoonist for the Public Ledger. He named his wife, Reba Baxter Mitchell, as his nearest relative. His description was medium height and build with blue eyes and brown hair. American Art Annual Volume 16 (1919) listed his address as "518 Walnut St., Philadelphia, Pa."

In the 1920 census, he lived in Springfield, Pennsylvania at 210 Rutgers Avenue. His daughter was 25 months old. He was an illustrator. During Prohibition, the Public Ledger sought the opinions of performing and visual artists about the absence of spirits. On June 8, 1922, Mitchell said, "Art need no stimulus, and the idea that wines or liquor of any kind are necessary for the production of good work is all wrong. It neither makes for better art, or a better appreciation of it. It would be a poor kind of art that depends on a false stimulus. Logic and common sense point out that better work is produced from a clear mind. A befuddled brain don't make for a particularly high grade of work."
Social Snapshots was another weekly feature he produced during the 1920s. In the second half of the 1920s, Mitchell contributed to The Delineator, Liberty, College Humor, McCall's and others.
He has not been found in the 1930 census. His magazine contributions included Physical Culture, Good Housekeeping, Ladies Home Journal and Redbook. On August 22, 1938, they arrived, aboard the S.S Queen Mary, in New York City from Southampton, England.
Mitchell passed away March 30, 1940, in Charleston, South Carolina, according to the New York Times, which published the news on April 2. The article said he was 53 years old, which was incorrect, so most sources have 1887 as his birth year.

Comments:
Very interesting. This is the most I've been able to read about Mitchell. I have two of his original drawings (charcoal?). Where could I find out their value?

Sites like askart or artinfo will have records of what their previous artwork has sold for at auction. Charles D. Mitchell's pieces mostly sell for around $200-600. I'm curious to see what pieces you own, would you email me?

Thanks for the info and rare photo of Charles D. Mitchell. He is a highly underrated artist in my opinion. He was a very accomplished draftsman. I am fortunate to own two of his drawings.

He also illustrated a lot of the front covers for The American Weekly around 1933/4, but only when they carried on their front page the commencement of a serialised novel - some examples: