Eleanor M. Schorer was born on April 13, 1891, according the Social Security Death Index. A New York City native, she was the oldest of two daughters born to William and Martha, as recorded in the 1900 U.S. Federal Census. They lived in the Bronx at 1806 Anthony Avenue. Her father worked in housing construction.
Ten years later the family remained in the Bronx at a different address, 2023 Morris Avenue. She found work at the New York Evening World. The Oregonian Magazine (Oregon) mentioned her in the article, "To Give Their Hearts but Keep Their Names", published on April 30, 1922.
And those of you who know anything about New York must know that there is there a Kiddie Klub which interests thousands of youngsters. It was started by the Evening World, and its fame has reached other parts of the country during the six years of its existence. The originator and director of the "Kiddie Klub" is "Cousin" Eleanor Schorer. She was just a slip of a girl when she started being a "cousin" to all children in the big town. But, when Chester R. Hope, a newspaper editor, recently made her his wife, he agreed that she would not have to quit being Eleanor Schorer. For the children would hardly recognize "Cousin Eleanor" in the person of Mrs. Hope.
Schorer applied for a patent. The Official Gazette of the United States Patent Office recorded the filing on February 20, 1917 (below). 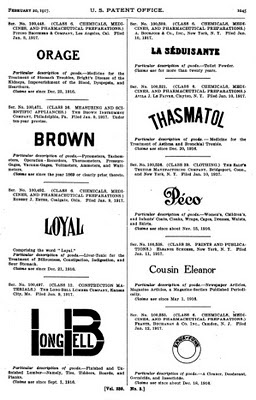 In the 1920 census the family of three lived in Bronx at 2055 Davidson Avenue. Her occupation was writer in the news industry. Her marriage to Chester Hope was announced in the New York Times on January 20, 1922.
Miss Eleanor Schorer, formerly an artist and feature writer on The Evening World, and Chester R. Hope, an editor of the Newspaper Feature Service, were married yesterday at St. Mark's Church, the Rev. Dr. William Norman Guthrie officiating.
For the last four years the bride has conducted the Kiddie Klub feature for The Evening World, and has written many children's books and plays. Mr. Hope was for ten years on the editorial staff of The Cleveland Leader. During the war he was a Lieutenant in the navy and attached to the Intelligence Bureau. They will spend their honeymoon in Provincetown, Mass.
In 1926 she produced The Adventures of Judy. The couple has not been found in the 1930 census. Foremost Women in Communications (1970) has this entry on page 306.
HOPE, ELEANOR SCHORER, Auth., "The Wishing Ring" (Harcourt, Brace & Howe, '19); play prod., '18; Free-lance Feature Wtr.-Artist, chief clients: Phila. Inquirer, St. Louis Globe Democrat, Toronto Star, starting '31; Wtr., Cartoonist, Dir. of children's activities.
Hope's World War II draft card, signed in 1942, recorded his home address as 345 West 86 Street in New York City. The Orangetown Telegram and Pearl River Searchlight (New York) reported on the newly organized Rockland Chapter of the Business and Professional Women's Clubs on August 1, 1947. Schorer was elected the Education and Vocations officer.
During the 1950s, Schorer's paintings were exhibited at the Brevoort Savings Bank in Bay Ridge, Brooklyn, as reported in the Brooklyn Eagle. 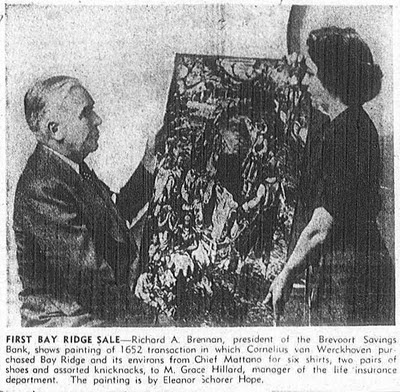