Henry Clark "Hank" Barrow was born in Louisiana either in 1905 or 1906. In the 1910 U.S. Federal Census, he was the second of four sons born to Charles and Hermine. They lived in New Orleans, Louisiana at 4850 Constance Street. His father was a salesman.
In 1920 the family of seven remained in New Orleans at a different address, 4854 Magazine Street. Information about Barrow's education and art training has not been found. Ten years later Barrow still lived with his parents in New Orleans, a few blocks away from their previous address, at 5357 Magazine Street. His occupation was newspaper artist. In the early 1930s he illustrated the serialized story, "Santa and the White Rose." In the mid-1930s he took over Milton Caniff's panel The Gay Thirties. The Times-Picayune (New Orleans) published this article on April 24, 1939.
Henry Barrow, Ex-New Orleans Cartoonist, Weds
Henry Clark Barrow, former cartoonist for The Times-Picayune who now draws the daily comic panel "The Gay Thirties" for the Associated Press features service, was married to Miss Katherine Lord Eyerly in New York Saturday [April 22].
Mr. Barrow is the son of Mr. and Mrs. Charles Barrow of New Orleans. The bride is the daughter of Mr. and Mrs. Elmer Kendall Eyerly of Hagerstown, Md.
The bride, wearing navy blue and a white flowered hat, was attended by a sister, Miss Margery Eyerly, and was given in marriage by her father. The best man was Charles A. Grumich, night city editor of The Associated Press in New York.
The wedding was followed by a large reception at the Fifth Avenue hotel. 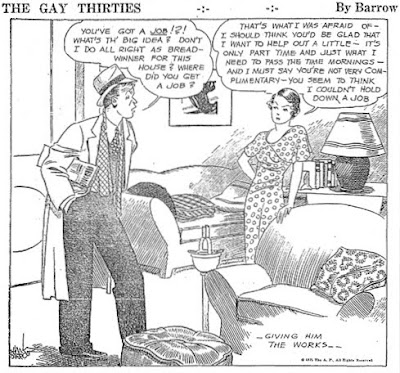 In the early 1940s, Barrow produced the strip Things to Come. 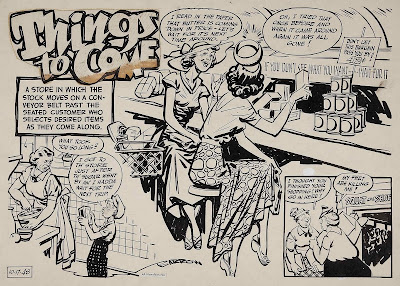 Heritage Auctions
On April 18, 1946 the Daily Mail (Hagerstown, Maryland) reported the following.
Cartoonist Known Here Is Featured
"Hank" Barrow, famous Associated Press editorial cartoonist, is the subject of a feature article in the latest issue of "AP World," a special publication for AP members and staffs.
Mr. Barrow's wife is the former Miss Katherine Eyerly, daughter of Elmer K. Eyerly, this city.
The article is illustrated, and describes how Barrow conceives his cartoons. One of Mr. and Mrs. Barrow's two sons shows sign of having inherited the artistic talent, the account states.
Barrow draws the cartoons which appear daily on the editorial page of the Daily Mail.
Barrow's talent was recognized by his peers, and was reported in The Gazette and Bulletin (Williamsport, Pennsylvania) on March 20, 1947.
Honor Hank Barrow and Rube Goldberg
New York (AP)—Henry (Hank) Barrow of the Associated Press and Reuben (Rube) L. Goldeberg of the New York Sun were presented bronze medals and plaques Tuesday by Sigma Delta Chi, national journalism fraternity, for distinguished service in editorial cartooning.
The awards were presented by Julien Elfenbein, president of the local chapter, in behalf of the national headquarters of the fraternity at a gathering of members of the New York professional chapter of Sigma Delta Chi and theta Sigma Phi, national journalism sorority.
Barrow was the first press association cartoonist ever to win the award. Goldberg received his award for an editorial cartoon titled "It Must Be a Leak." 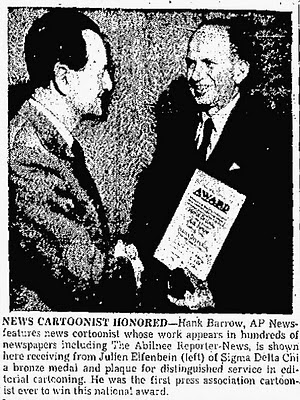 Abilene Reporter News (Texas) 3/27/1947
In 1949 Barrow joined the staff of the World-Herald (Omaha, Nebraska); his first editorial cartoon was published on August 9, 1949. His cartooning past was mentioned on January 25, 1953.
…A 30-year veteran of the drawing board, he began his career with the New Orleans, La., Item. He also was staff artist on the New Orleans Times-Picayune before joining the Associated Press in New York in 1934.
During the 1930s Mr. Barrow did a one-panel cartoon, appropriately entitled "The Gay Thirties." The cartoon was distributed to many newspapers by the Associated Press. It was much like The World-Herald's comic, "Out Our Way" cartoon, usually featuring children's antics.
Its death, said Mr. Barrow, was in its title….
His work day was described on October 13, 1964 in the World-Herald.
A National Newspaper Week Profile: Admirers of the World-Herald cartoonist Henry Barrow are forever asking where he gets all his ideas.
They'd really be impressed of they knew that Hank works up at least three ideas for every cartoon that gets into the paper.
The Barrow work day begins at about 8:15 when he arrives at the office and begins a casual reading of the morning paper. By 11:30 a.m. he has completed rough drawings for three suggested cartoons.
Editor Walter Christenson takes a look at the suggestions and picks the one he likes. Hank applies the finishing touches to that one for his 1:30 engraving deadline.
The New Orleans-born cartoonist has followed that general routine throughout his journalistic career, including a 15-year stint in New York when he drew a daily cartoon for the Associated Press. His fertile imagination was on a 4-for-1 schedule then, too, and sometimes 5-for-1.
More than 150 papers used the Barrow cartoons regularly. But he quit the A.P. in 1949 to join The World-Herald because he wanted a chance to take a stand on controversial issues.
It was tough trying to function under the A.P.'s anemic impartiality codes, he said. What was the point of being an editorial cartoonist if you couldn't express an editorial opinion? With the A.P., he had found himself dealing with an endless chain of non-controversial subjects, such as coming of spring, motherhood and the arrival of the baseball season.
Barrow retired from the World-Herald on August 1, 1971. Executive Editor Louis G. Gerdes wrote, "Unlike some cartoonists, Henry Barrow was extremely generous in passing out originals of his more than 6,000 drawings that appeared during his nearly 22 years with The World-Herald…." On page ten was a selection of his best cartoons. 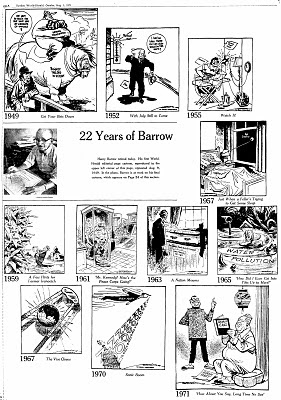 World-Herald 9/1/1971
Barrow passed away on September 1, 1985. On September 4 the Orlando Sentinel (Florida) published the following.
Henry "Hank" Barrow, 79, a former cartoonist for the Omaha World-Herald and The Associated Press, died Sunday.
Barrow retired from the World-Herald in 1971 after drawing more than 6,000 cartoons for the newspaper.
He joined the World-Herald in 1949 after 15 years with the AP in New York.
On the same day, the Chicago Tribune (Illinois) said he "died at age 79 after suffering a stroke, his family said."

Thanks. I think Barrow was an immensely talented cartoonist. I have a whole year of his early forties cartoons waiting to be scanned. On which oocasion I will refer to this piece...

Thanks, Ger. I look forward to your Barrow scans.

Well, they are still waiting to be scanned... but I got around to doing the first four.

I have two cartoons, framed, signed and look original. Ic an send photos if I had an email for you.
Thank you.
Sheila

Hank Barrow was a pioneer in the comic strip world,but he was an even taller giant to his family. Papa he will always be to me! The moment he saw I was to be left handed he took me to his "office" on the top floor of his house and that is where my education began! I will forever cherish the time slant with him, and his homemade b'day cards. Sitting with him, listening to Peter and the Wolf by Prokofiev, he was the best part of my childhood.