John Norman Lynd was born in Northwood, Ohio on November 15, 1878. His birthplace was recorded on a 1907 passenger list at Ancestry.com, and the birthdate was on his World War I draft card. In the 1880 U.S. Federal Census, he was the only child of John and Belle. They lived in Richland, Ohio. His father was a minister. The New York Times, November 9, 1942 obituary said, "…Mr. Lynd spent most of his youth in London and North Ireland where he was educated…"
On June 1, 1907, he and his brother, Ralph, a foreign correspondent, sailed from Londonderry, Ireland. They arrived in New York City on the tenth; their final destination was 82 Sterling Place in Brooklyn. The passenger list said Lynd's occupation was draughtsman. The Times said, "…He returned to this country in 1907, becoming associated with The Herald soon after his arrival…."
In the 1910 census, he was married to Isobel, a Welsh emigrant, and lived in Manhattan, New York City at 522 West 136 Street. They had been married for two years. The household included his brother and sister, Dora. Lynd worked at home as an artist. He signed his World War I draft card on September 12, 1918. He lived at 300 Denton Avenue in Lynbrook, Long Island, New York, where he was a newspaper artist. His description was tall, medium build with blue eyes and brown hair. In 1919 he produced You Know How It Is. 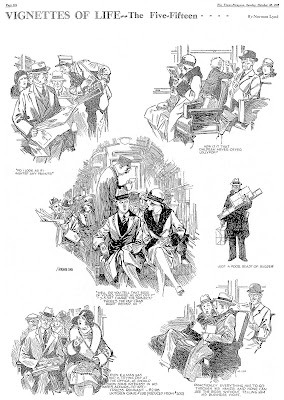 10/30/1927
The couple was at the same address in the 1920 and 1930 censuses. He was a self-employed artist. In the Times-Picayune (Louisiana), Lynd took over, from Frank Godwin, Vignettes of Life, on October 23, 1927 and stayed on it through mid-1939. The Times said, "…[He] left The Herald when it merged with The Tribune and did freelance work and magazine illustrations until five years ago, when he joined King Features, Inc. His most recent syndicated cartoon was the 'Family Portraits' series."
Lynd passed away November 7, 1942, at his home in Lynbrook, according to the Times. The cause was a heart attack.

Comments:
Nice find there. It's interesting that each cartoon (save for one) takes place on the train. I can't relate to that, but I suppose the themes of women and work are still extremely popular in today's funny pages. --Matt